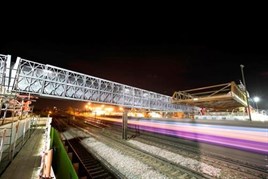 Timelapse footage shows the movement into place of the £10 million Tennison Road bridge, while the ten lines it spans remained operational throughout. The lines form the main lines into London Bridge at Tennison Road, Norwood Junction (south london).

The work on December 6 marked a midway point in the project to replace the original bridge with a bigger, better structure, which will have a wider carriageway and footways. The original structure has spanned the main lines between London Bridge and East Croydon since 1922.

"A combination of technology and engineering expertise meant we could keep trains and passengers moving while we the bridge was launched across the tracks. This is the first time we’ve worked in this way – in the past the only way would have involved a complete closure of the railway, which would have caused huge disruption," Network Rail's Scheme Project Manager, Shane O'Connor said.

The new Tennison Road bridge is due to open for public use in spring 2015.