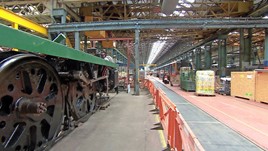 Tucked away in the far corner of a giant railway shed in Eastleigh is the shell of a steam engine. A handful of volunteers from the Mid-Hants Railway heritage line are painstakingly bringing it back to life.

Canadian Pacific is a Merchant Navy class locomotive. It was built on the same site in 1941. It was manufactured partly by women, drafted in and hurriedly trained to replace men who had gone off to war.

Documents from the time show that 1,500 women were employed at Eastleigh Works. So it seems entirely fitting that the person in charge of the restoration is Dr Becky Peacock.

“I think it’s rather nice that this project is being overseen by a female,” she says.

“This engine was built in this shed by a lot of women. So it does have a poetic symmetry.”

The project is largely paid from the Heritage Lottery Fund. As part of the associated outreach work, Peacock has been researching the history of women in the railway.

“Women would have been in a host of different environments within Eastleigh Works,” she explains.

“They were in the machine shed making parts. There’s an appointments book, which shows they were working on the shop floor as well. They were in the drawing room. They were in the carriage and wagon works. The only place you wouldn’t have found women was in the boiler shop, because that was highly specialised work.”

Today it is very different. According to 2015 research by the Women in Rail group, only 16% of the rail industry workforce is female. Other estimates put the number even lower. That compares with 47% for the UK as a whole.

In fact, the rail industry ranks among the poorest in the economy for gender imbalance.

And when it comes to the supply chain, the figure is even smaller. The Women in Rail study, which covered 85,000 people, found that the supply chain is 95% male and only 5% female. That’s just one worker in 20, and bears little relation to wider society.

“The railways do seem to be very male-dominated,” agrees Peacock. “After the Second World War, a lot of women were pushed back out of the work they were doing here at Eastleigh. Men started taking the jobs back.

“In the 1970s came the Sex Disqualification Act, which was supposed to help women applying for traditionally male roles. But British Rail didn’t allow it to come into force until 1986. So only 32 years ago, women were still being prevented from applying for any role they wanted on the railway on equal terms.”

Volunteer Malcolm Tomlin works alongside Becky Peacock on Canadian Pacific. His connection with Eastleigh stretches back much further.

“I’ve been here 56 years,” he explains. “I started on September 10 1962, when it was still the locomotive works. We were doing all steam engines then, and I’m still doing them today!

“A lot of the work on Canadian Pacific would have been done by women. During my working life there were quite a few women here - in the office block, obviously. Also in the trimming shop. My mother-in-law worked in the French polishing shop, doing all the woodwork for the seats.

“They weren’t usually out on the shop floor with us, though. They had their own areas.”

Today, beyond the confines of the steam locomotive, there’s not a woman in sight.

In the same shed, just a few metres away, Siemens is refurbishing its South Western Railway fleet of Class 450 and Class 444 Desiro rolling stock. It’s a huge project, providing 18 months of work for 150 people.

We approached Siemens to get some pictures of women in the modern workplace, to provide then-and-now context for the work on the steam engine. Initially keen, Siemens soon declined. There was a problem, said a spokeswoman.

“We thought we had identified two women. But one has left and the other has transferred to another site.”

How many women are on the team, exactly?

So, there are proportionately far fewer women working there today than there were 75 years ago? It would appear so.

Siemens later qualified the numbers. Overall its rail workforce is 13% female. At its main South Western depot four miles down the track at Northam, the figure drops to 9%.

“It does seem strange,” admits Peacock. “I’ve been coming here for three years, and I’ve probably seen three other women working in these sheds in the entire time I’ve been here, whereas when I go to the Watercress Line sheds at Ropley, I meet women in many different roles - on the footplate, in the workshops, in the boiler shop.

The Women in Rail study found that across the UK just 7% of engineers are women. In the railway, that figure drops to 4%. Network Rail and the Department for Transport both fall below the industry’s average, with only one worker in 11 being women.

Within Network Rail, 83% of female staff are employed in the most junior grades. This heavily skews the figures for the industry as a whole, with only a handful of women - well, a few hundred among a staff of 30,000 - making it to management grades. Only 0.6% progressed to executive level.

While job availability for both sexes is always greatest at the bottom of the employment pyramid, the report found the lack of women at the top went well beyond normal attrition.

“This indicates that rail does invest in, develop and attract talented women, only to lose them before they reach senior management levels,” the report concluded.

In fact, most women in the survey “gather around on-the-ground service roles, such as catering staff, train guards, customer service and retail”.

RAIL asked Women in Rail to discuss whether this had changed since 2015, but no one was available for comment.

“Women still feel it is difficult to come into this environment,” says Peacock.

“Sometimes they find it isn’t set up for them. Sometimes there still aren’t appropriate facilities for female staff - right down to something as basic as separate toilets.

“I work with a lot of schools, in particular 14 to 16-year-olds, showing them the railways can be a worthwhile career, encouraging them to take the STEM subjects - science, technology, engineering and mathematics - at college and university, and then into careers.

“It’s about finding women who don’t mind being the ones who get their foot through the door, who are going to pave the way, who might be the only woman in a working environment.

“The armed forces are doing that very well, and getting higher numbers of young women in. The railway needs to follow that lead.”

The Women in Rail 2015 report found that girls are rejecting careers in rail engineering from a very young age.

Girls as young as ten described it as “dirty and messy”, with many deciding it was for the “physically strong” and “dangerous”. Among girls between the ages of 12 and 15, the most common terms were “unglamorous” and “socially isolating”.

So, what is being done about it?

In July this year, the National Skills Academy for Rail completed a study of diversity in the industry. The objectives are: to increase female representation among new entrants to technical and engineering apprenticeships to 20% by 2020; to increase the number of black, Asian, and Minority Ethnic (BAME) groups; and to achieve parity in gender diversity by 2030.

Given the experience at Eastleigh, that would seem a highly ambitious target with rail currently not remotely representative of society as a whole.

In its introduction, the report concedes: “Currently the rail industry has a predominantly white, middle-aged, male workforce. We want the rail industry to reflect the diverse communities of the UK population at the very least.”

But its findings are encouraging. It states that 30% of the rail industry workforce is now female, far ahead of all other estimates used in the industry. “This is higher than previously used values and would indicate things are improving,” the report concludes.

It also found that the rail sector is more diverse than UK employment as a whole in terms of ethnicity and religion. Some 27% of rail employees are other than white, compared with 15% in the wider economy. The female workforce is more diverse than male equivalents. And the railway in London is significantly more ethnically diverse than in any other part of the country, with almost 40% non-white.

However, the report cautions that the industry remains slightly older than average: one in three employees are over the age of 50.

What of the Canadian Pacific locomotive itself?

“We’re not far off having a rolling chassis now,” says Tomlin.

“We’re just waiting for the front bogie and the pony truck at the back. We’ve got pistons to put in, slide bars to put up, valves to fit. Then we’ll be waiting for the boiler. I’d say that’s 14 to 18 months of work.”

Reaching 105mph near Winchester, Canadian Pacific was the fastest Merchant Navy locomotive. It was retired in 1965, after 24 years of work - less wear and tear than much rolling stock today. The restoration was projected to cost £1.5 million, although the volunteers are already £130,000 over budget. Some £895,000 comes from the Heritage Lottery Fund.

“The aim is to have it in steam, here where it was built, in 2020,” says Peacock. “Arlington lease us the space on generous terms - they can see the historical significance of getting this locomotive back to work in this location.

“It won’t be used on the main line, but it will become the flagship of the Watercress Line - a star attraction. And we’re aiming to do it with an all-female footplate crew.”

That would be a potent symbol of a time on the railway when there were more skilled women getting their hands dirty in the workshops than there are today.