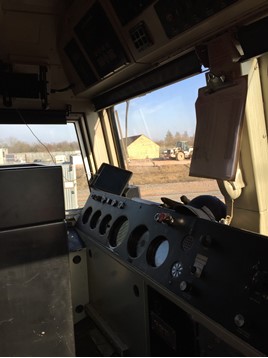 RAIL asked several drivers - some ex-BR, others new to the railway after the ‘66s’ broke on to the scene:

"I don’t come home smelling of diesel and freezing cold, so that’s a plus point.”

“Brilliant stove, easy to work, super reliable and will pretty much pull anything.

“Fitting of air-con was a well-overdue must. Hot day trapped at the fan end was horrific.”

“Dependable locos that just keep going, easy to prep and when they play up easy to find the fault. Cab ergonomics atrocious to the point where you have to stand up, keep the DSD down with one foot and reach to the floor on the secondman’s side to adjust the heater. Cabside windows very poor, leak noise and wind. Air-con and more robust side windows have helped. The cabs are noisier that a Deltic.”

“They were part of the reason I left EWS. As everyone seems to agree the noise in the cab was unbearable and you were usually listening to the 84db at 0300.”

“4S49 and 4M30 liner jobs off Carlisle were truly terrible for vibration and noise as far as Beattock and Shap, but I really did pity the EWS boys going over the Midland with 2,000 tons of coal. That must have been beyond painful.”

“Definitely cab noise is an issue when working notch 7/8. I have industrial hearing loss, blamed on first-generation diesels, but when sent to a specialist by ASLEF regarding a claim, he already knew about the Class 66 ‘noise tunnel’. I believe this to be a design fault. That generation of EMD unit had no engine mountings as such. Therefore, when working hard the engine will transmit noise and vibration straight through to the cabs.”

“The plus side of the Class 66 is, if used as designed and kept running, they are very robust and give remarkable availability; 98%+ not uncommon. I remember BR diesels, even the modern classes, were lucky to give 65%. When keep shutting them down and restarting after short periods, the availability dropped, mainly due to battery failure or coolant leaks.”

“I worked them when they were new and didn’t mind them too much. Horns stupidly loud in the cab and they should have had AC from new. Obviously US theory, built to do a job at a price which they did well, but then they get used for jobs outside that spec which they are unsuited to. Fantastic traction package that puts that on a Class 92 to shame. Overall 7/10.”

“Cheap to build, reliable and easy to maintain compared with anything else, but no thought went into the driving environment. Poor layout, noise, vibration and resonance (particularly in notch 7), bad ride quality (lost count of how many times my tea was spilt!) and draughty in winter yet hot in summer, including the bizarre vortex when the fan end was leading (drawing hot air forward from the fans into the cab). I don’t miss them one bit!”

“Horrendous machines. The last few times I’ve been on the Wentloog job I’ve managed in notch 6 or below because I value my hearing. Nothing has been done over the years to reduce noise. I detested them from the outset.”

“Poor cab layout, noisy, hot in summer, built on the cheap, but generally does what it says on the tin!”

“Best feature on them is the ‘Engine stop’ button. Built to a price, however they keep going and get the work done. As much as I don’t like them I can appreciate why the FOCs all use them. Minimal maintenance and pretty bombproof. Best improvement was our fleet (FL) now have decent HVAC units so you can keep cool in the summer.”

“I didn’t like the ‘66s’ at first, but since we got the ‘70s’ I would rather a ‘shed’ any day of the week over them. I look at it as they do the job but are starting to be tired now due to the work and mileage our ones do.”

“The Class 66 is the only reason we have a rail freight industry in this country today. Yes, they are noisy, but so were most pre-privatisation locomotives as well. They may not be everyone’s favourite, but they do a job and they are still highly sought-after even though production has stopped (GB buys every one it can get its hands on, it seems). I like driving them because they are dependable (I’ve only failed on two in 13 years) and get 99% of jobs done. Cab can be noisy and definitely more can and needs to be done with noise reduction, but overall they aren’t too bad.”

“Just one ‘in traffic’ failure in ten years for me. But it was a good ’un and stopped the job entirely for a few hours...!”

“Nothing good about them! Bad points are too many to list, but a few are no air-conditioning, poor build quality, poor at pulling, and notched power settings are c**p!”

“The bad things about ‘66s’ are the drivers who unfortunately have to drive them had no input to the cab layout and design improvisations before the introduction to the UK. Noise is the biggest issue - poor or no sound proofing in the bulkheads, cab engine stop button badly located, cab entry bulkhead doors open when on the move, poor locks, front windows leak water in, horns fill with water in heavy rain, cab side doors gaps and rattle, notch 7/8 noise levels/vibrations excessive. Cheap build and no thought for the men/women that have to drive them day-to-day. On the plus side, pretty reliable.”

“Give me a ‘66’ any day... I know what I can get out of a ‘66’. I can keep an eye on the speedo and know roughly where the power cut-off can appear and run them accordingly. On Class 70s you spend too much time looking at the speedo to see if it goes white to yellow all of a sudden and possibly suddenly red, then the brake goes in! Don't have to worry with a ‘66’.”

“Noisy rough riding. One of the main reasons I left EWS. Tinnitus is bloody awful and I totally blame ‘66s’. I would prefer a ‘60’ any day of the week!”

“I don’t know about other companies’ ‘66s’ but the Green ones have been hammered to an inch of their life now. The maintenance they receive is very minimal - patch it up and kick it out, they are working harder now with heavier trains than they ever have. The failure rate is now getting to be a problem with them. The bodywork is an issue now with the spot welding and rust - the bodies are distorting so the cab doors are now flapping as you go along at speed, as they now don’t fit the frame. But I would still have one over a Class 70.”

“I drive red ’uns - in fact, I’m sat on one now. They’re rugged, honest and, 999 times in a thousand, they’ll get you home. I agree with most of the points above, but the lack of maintenance is not the fault of ‘66s’. My hearing is shot anyway, too many times down the front at Motorhead gigs to worry about that any more. I may not be a fan of them, but I do have a large amount of respect for what they can do.”

“I loved them! Best locomotive I ever drove, once I had put a brush around cabs and tidied up a bit! No problems for me - I’ve only ever had one complete failure.

“As a former Controller, it breaks my heart to say ‘66s’ gave me less hassle than all other classes I was involved with. If they failed, a reboot of the electronics would normally get it inside clear at least. With my enthusiast hat on I much prefer ‘56s’ and ‘37s’, but with my professional hat it’s EMD every time.”

“The cabs are awful for vibration and hot in the summer, especially No. 2 end, they can be rough riding and are practically charisma-free. But they are reliable!”

“I had four proper failures with them over the years - one of which I was able to coax back to Avonmouth coasting for the last few miles downhill with the engine dead, the other three needing to call out International Rescue. To put the above into context, I only had a similar number of failures with BR types over the years before the introduction of the ‘66s’.”