As lockdown restrictions ease and we start to consider travelling again, the future of cross-Channel operator Eurostar remains uncertain.
Eurostar is seeking financial support from the UK Government, citing higher access charges here as a reason.
The French Government has pledged to provide support for the operator, while £200 million has been provided by one of its shareholders, Caisse de Dépôt et Placement du Québec (CDPQ) and Hermes Infrastructure.
Registered in the UK and supporting 3,000 jobs either with the business or in the supply chain, the company is, however, 55% owned by SNCF (French state rail), 40% by CDPQ/Hermes and 5% by SNCB (Belgian state railways).
So: Should the UK Government provide financial assistance to Eurostar? 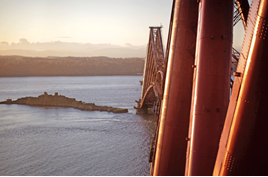 The 127-year-old Forth Bridge is far more than just a bridge - it’s a Scottish icon, a masterful example of Victorian engineering prowess and a UNESCO World Heritage Site.

With all due respect to the Tay Bridge, which is longer, it’s the highlight of any journey north from Edinburgh towards Dundee and Aberdeen. It’s one of the ‘must see’ attractions for the millions of tourists who visit Scotland every year.

Built by the North British Railway (NBR) as the final link in a direct east coast route from London to Aberdeen, the bridge is more than 8,000ft long, and 361ft above water level at its highest point.

Designed by Sir John Fowler and Sir Benjamin Baker, it was the winning entry in a competition to find an alternative solution to the existing ferry link across the Firth of Forth, and to the designs of incumbent engineer Thomas Bouch, who was discredited after the collapse of the Tay Bridge in 1879. Work started in 1882, and over the next eight years resulted in a structure that was the antithesis of Bouch’s slender (but flawed) link over the Tay.

The enormous cost of building the bridge was shared by four companies of the Forth Bridge Railway Committee (FBRC), set up at a conference in York in 1881. The NBR contributed 35%, the Midland Railway 30%, and the North Eastern and Great Northern Railways the rest, with their shares passing to the LNER and LMS in 1923. The FBRC was nationalised along with its ‘Big Four’ shareholders in 1948, becoming the responsibility of the British Transport Commission and later BR, Railtrack and now Network Rail.

It was the first major structure in Britain to built of steel, rather than wrought iron, the quality of which had also been identified as a factor in the Tay Bridge disaster.

Each main span consists of two 680ft arms supporting a central 350ft span truss. There are two main cantilever spans of 1,700ft, two side spans of 680ft and 15 approach spans of 168ft. When completed, it was the longest single cantilever bridge span in the world and a wonder of the age (although since 1919 it has had to settle for second place behind the Quebec Bridge in Canada).

But, since its opening by the Prince of Wales (later King Edward VII) on March 4 1890, public access has been restricted to viewing the gigantic structure from a distance, or from the inside of a train - more than 200 of which use it to race 150ft above the Firth of Forth every day. Alighting from a train on the bridge in the manner of Richard Hannay, the fictional protagonist in John Buchan’s novel The 39 Steps, is generally frowned upon… for obvious reasons.

Occasional private visits have given VIPs and journalists a rare opportunity to experience the thrill (or perhaps terror) of negotiating exposed ladders and walkways hundreds of feet above the water, something otherwise enjoyed only by the dozens of maintenance staff who care for this beloved structure.

But that could soon be about to change. Network Rail is progressing with a £10 million plan to develop part of the southern cantilever span as a tourist attraction - an idea suggested by RAIL Managing Editor Nigel Harris when he visited the bridge in 2011 (RAIL 686).

Up to 80,000 people a year are expected to climb the bridge, using an existing walkway under the south span and a new steel walkway/viewing platform suspended within the top framework of the southernmost of the three spans. Similar bridge walks have become an extremely popular attraction on the Sydney Harbour Bridge in Australia and the Yokohama Bay Bridge in Japan, which also has a viewing platform.

NR’s proposal for the Forth Bridge visitor attraction has been scaled back somewhat from the original 2013 idea, which included a visitor centre and viewing platform on the North Queensferry side as well as at the southern end.

However, the new ‘leaner’ plan will arguably offer a more authentic experience, as visitors are guided from a new hub building near Hawes Brae, just 250 metres from Dalmeny station. Network Rail says the new plan will cost less and deliver a quicker return on its investment.

Groups of 15 visitors at a time - encouraged to arrive by ScotRail train - will be hooked onto the bridge using a harness and continuous safety line.

However, before all that can happen, NR is undertaking a public consultation. And it will need to obtain planning permission, listed building consent and agreement from national and world heritage officials to make the necessary alterations to the bridge.

“The Forth Bridge is one of Scotland’s most loved structures and our plans reflect that,” says ScotRail Alliance Infrastructure Director David Dickson.

“The access gantry we are proposing will be almost invisible from the shore and fully reversible should we wish to remove it in the future. What we must not forget is that the Forth Bridge is a working structure which has always required maintenance, and that will continue.

“What we’re proposing will simply allow us to invite visitors to learn about the history of a structure that, in the past, has only ever been accessible by a lucky few railway workers.

“We take our role as the stewards of the Forth Bridge extremely seriously. We believe that this proposal will help people appreciate this wonder of the industrial age and help spark a renewed worldwide interest in the history and heritage of Scottish engineering.”

“I’ve seen and felt the impact of suicide on a personal level and understand the importance of the work the Samaritans does," - Ian Prosser CBE

As lockdown restrictions ease and we start to consider travelling again, the future of cross-Channel operator Eurostar remains uncertain.
Eurostar is seeking financial support from the UK Government, citing higher access charges here as a reason.
The French Government has pledged to provide support for the operator, while £200 million has been provided by one of its shareholders, Caisse de Dépôt et Placement du Québec (CDPQ) and Hermes Infrastructure.
Registered in the UK and supporting 3,000 jobs either with the business or in the supply chain, the company is, however, 55% owned by SNCF (French state rail), 40% by CDPQ/Hermes and 5% by SNCB (Belgian state railways).
So: Should the UK Government provide financial assistance to Eurostar?

@mattgriffithsuk You're welcome Matt. Deserves a much wider audience.