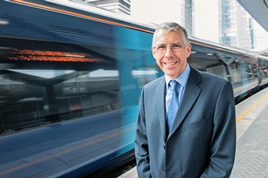 When British Rail reopened a short section of line under central London in the 1980s, it radically changed the way many commuters reached their offices.

Snow Hill’s tunnels had been mouldering for around 15 years when BR’s newly created Network SouthEast sector realised the potential they held. Restoring the half-mile link between Farringdon and Blackfriars re-created a north-south route across London that had been lost in 1969, allowing BR to run through trains between Bedford and Brighton. These trains were Class 319s, with their dual-voltage capability able to work on the overhead electrified Midland Main Line and the third-rail road to Brighton.

Dubbed Thameslink, NSE reckoned in 1988 that the whole project would cost £54 million including the new trains (that’s £133m today, allowing for inflation). The project allowed Holborn Viaduct station to close, replaced by City Thameslink. Farringdon was once again a junction, with some trains heading southwards for Blackfriars and some turning east to serve Moorgate. Not restored was the south-to-east chord that had closed in 1927.

Fast forward just ten years from 1988 and there was plenty of talk about expanding Thameslink, this time with ‘2000’ tagged onto its name. This would expand NSE’s idea and add a link to the East Coast Main Line (ECML).

Such a link had existed until 1976, with direct trains running from the ECML into Moorgate via King’s Cross. BR shut this link and instead ran trains into its other Moorgate station (the Deep Tube one that had been served by London Underground until 1975).

Thameslink 2000 is today simply Thameslink, a £6.5 billion project that now has its finishing line in sight. New Class 700 trains are running and the huge list of engineering jobs is drawing to a close.

The project is divided into three stages, called ‘key outputs’. Key Output Zero (KO0) in 2009 closed the Moorgate branch, because Network Rail had to extend Farringdon’s platforms to enable 12-car trains to run, and it could only do this by taking the space used by the junction for Moorgate.

This stage also closed the terminal platforms at Blackfriars, ready for that station to be rebuilt to switch its terminal platforms from east of the through lines to the west. The station was also extended to span the River Thames, so that it can serve north and south banks.

KO1 turned the project’s attention to delivering the infrastructure needed to run 12-car trains between Bedford and Brighton. It built a new viaduct at Borough Market, which was finished in 2012 but which did not open until it was needed in 2016.

KO2 featured a further increase in engineering work, with track laid in Canal Tunnels between St Pancras and the ECML at Belle Isle. The tunnels themselves were built between 2004 and 2006, as part of the rebuilding of St Pancras station as the terminus for High Speed 1 and international trains from France and Belgium. This project also delivered a station box for Thameslink, which opened in 2007 and replaced nearby King’s Cross Thameslink.

KO2 also delivered a dive-under at Bermondsey, in south London, to allow Thameslink services to be separated from those of Southern and Southeastern. It is delivering a new station at London Bridge, in what is probably the most visible part of the whole project, as well as extensive changes to track and signalling in the surrounding area. There has also been work further from London, such as building stabling sidings at Peterborough.

Today’s project goes far beyond the comparatively simpler project that British Rail delivered. Simon Blanchflower is the man running it from offices in south London that overlook the tracks between London Bridge and Blackfriars. RAIL met him to talk about how such large projects are efficiently delivered, and he is clear that creating a realistic schedule and then sticking to it is vital to success.

“On Thameslink, we have several inter-related project streams that come together to deliver the overall outputs. We’re rebuilding London Bridge station using a series of sections across the station. We progressively move from south to north across the station, taking sections of the station out of use to rebuild them, bringing that back into use and then taking the next section out.

“That clearly has to align with all the track remodelling and the resignalling work that goes on in parallel. Each time you take a section of station out, you have to remodel the track layout to accommodate those changes. That has to be aligned with the signalling aspects that you’re going through. So actually, establishing an integrated staging schedule through that period was absolutely key.”

The schedule Blanchflower is talking about was set back in 2012, and included firebreaks to allow for events.

“It might mean that you have to deploy some contingencies and mitigations along the way so that you adhere to the programme, but that is small in comparison with the impact of not adhering to the staging strategy and having to rework and re-stage the sequence of works. For me, a key aspect of efficiency has to be a robust schedule, a robust staging strategy that everybody is aligned around and which gives focus to the programme team as they deliver the works.”

Of course, NR doesn’t do all the work itself. Most is delivered by contractors, and Blanchflower created a loose (rather than formal) alliance so that everyone’s efforts were unified. This meant that Costain (rebuilding London Bridge), Balfour Beatty (remodelling track) and Siemens (delivering revised signalling) all depended on one another.

Blanchflower notes: “Each of the supply chain members has a series of incentivised milestones that they have to achieve, but they only get rewarded if everybody achieves their milestones. So it brings that cross-fertilisation, that cross-alignment of incentivisation - they either all succeed together or they all fail together.

“That drives the behaviours around how those various supply chain members work together to achieve those delivery targets. You can have a schedule, which is great, but then you need a contractual mechanism and an alignment of values within a supply chain that’s going to mean that your key contractors are focused on achieving that schedule and supporting each other.”

However, having a schedule is not the same as having an efficient schedule - either in terms of time or money. Trying to do something too quickly, with high levels of concurrent and inter-dependent work, can raise the prospect of delays. But taking longer might involve higher costs in terms of contractor employment or disruption compensation.

Blanchflower contends: “Clearly there is a balance that needs to be struck between that loss of capacity and capability of the network, diminution of offer in terms of the ability to run train services, with the costs of the works you are carrying out.

“I think what we’ve tried to achieve through the staging strategy we have had at London Bridge is, as far as practicable, to get the right balance between disruption to the rail network and providing us with sufficient access to enable efficient delivery of the works.”

He’s honest enough to admit that he might not have always achieved that perfect balance, but reckons he’s reasonably close. Working out what that right balance might be involves talking to those affected.

“The Thameslink programme has had a fairly mature programme board for a number of years, which draws together the Department for Transport, Network Rail (both in terms of the route and the delivery programme), the key train operators, Siemens as the rolling stock manufacturer, and so on.

“There is an industry partners’ board that oversees this, so the maturity of the relationship between the various industry partners has helped us to work through a number of iterations that has brought us to a place where people are not necessarily entirely comfortable, but accepting that it provides the best balance in terms of optimising the schedule and access required to do the works.

This suggests that what’s efficient for one player might not be for another. For Thameslink, the DfT sits at the centre. It owns Network Rail and sets the specification for the train operator to work to. It usually does this through a franchise, but such were the risks surrounding Thameslink that it took the unusual decision to let the train operation as a deal in which the DfT receives all the fare revenue and pays the operator a fee for running the service. This means that if the project went badly wrong and trains could not run, it would not be the train operator that suffered from something that it could not control.

That’s not to say that the first plan was accepted as the best one. It bounced back and forward: “There was a feedback loop that said ‘this will work, but we don’t think we can live with this level of restriction in this part of the layout - can you relook at this part to try and lessen the impact on capacity?’ So you go back and look at the rework cycle to understand what that might look like in terms of programme duration and staging.

“Effectively, it is an iterative process that says that if you start to break this down any further then the extension to the programme is going to be significant, and therefore your construction costs are going to start to go up and so we really can’t go down that avenue any further. It is primarily through dialogue with subject matter experts, pulling together people from train operators, working through with them what can we do with the train service, how can we reorder the train service in order to be able to accommodate this.”

Assurance that the programme (as finally decided) is as good as it can be comes from its acceptance by other players. But it doesn’t always work, as the problems at London Bridge in January 2015 showed.

“We tried to run too many trains into London Bridge Low Level, and had to do some fairly short-term re-planning to try and re-optimise that,” admits Blanchflower.

“I think it just illustrates that when you have such a tight system that you’re operating in the London area, which we are - you can model it, you can do all the planning, but because of the inter-connected nature of a lot of these services and how the network operates as a system, sometimes even small discrepancies can start to have a wider impact, which is what we saw in January 2015.”