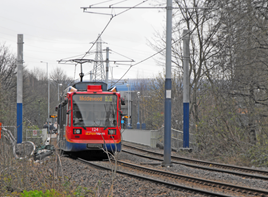 No matter how close the future seems to be, it is always one tick of the second hand out of reach. So it seems with the UK version of tram-train.

Promises have been made and deadlines missed for the pilot version in South Yorkshire. Purpose-built vehicles have been delivered and are undergoing acceptance trials, and track has been laid… but still the service hasn’t begun. In the meantime, other cities have announced their desire to develop similar projects, but are still waiting to see what the passenger’s experience really is.

A tram-train experiment was first mooted for the Penistone Line in 2008. However, this scheme would have offered no connection to Sheffield’s Supertram network, and so eventually evolved into the current £51 million project.

From one corner of the tram network a short new chord line has been part-constructed that will connect the existing tram lines with Network Rail metals (a freight-only line that runs towards Rotherham, and which in due course feeds into the passenger line through Rotherham station).

Generally speaking, Rotherham is served by local trains, but the line is also occasionally used by through express services. A low-level platform extension will be built at the station, offering tram passengers a direct interchange. The tram-trains will then continue along the Network Rail line for another mile, before turning off onto a purpose-built spur and terminating adjacent to an out-of-town retail park. This means they can unload and collect passengers at a purpose-built platform without causing a delay to through trains on the national network.

Once the tram-trains have reversed they rejoin the main line and travel once again through Rotherham, back onto the freight line and via the chord to the Supertram network. Passengers will therefore be able to alight in the heart of Sheffield city centre, rather than at the Midland station.

This is by no means a particularly long extension, but it does achieve two things. On a local level, it breaks the tram out of Sheffield and makes its original ‘South Yorkshire’ Supertram moniker much more fitting. Secondly, it tests the principles and technology of light rail mixing with heavy, as successfully demonstrated on the continent since the early 1990s onwards.

It has always been envisaged as a two-year pilot, but principal partner South Yorkshire Passenger Transport Executive (SYPTE, which bid for and won the funding from Government) has its eye on the much longer-term future. It is estimated that 35 jobs will be created purely in its operation and maintenance, but the local Chambers of Commerce are hopeful that many more will follow in the local economy, invigorated by this so-called ‘seamless commute’.

Seven ‘CityLink’ vehicles were ordered from the Vossloh plant in Valencia (now Stadler Rail). They are dual-voltage, running on 750V DC (as used on the tram network) but capable of using 25kV AC (as found on the national network).

Back in the autumn of 2015, the first was being completed and prepared for shipping to the UK (RAIL 789). All seven have now arrived in Sheffield, with required modifications to the main shed completed.

A rail replacement programme on the Supertram network has been carried out, partly in preparation for the service to begin. Some of the tram trains have even been spotted out and about in daylight hours, for testing and mileage accumulation. However, not a single passenger has been carried yet, as dates for the service to start have come and gone.

Originally expected to run in 2015, the date was revised to January 2016, and then January 2017. Part of this delay was down to the need to apply for a Transport and Works Act Order to construct the new chord line between Supertram and Network Rail. It is only 400 metres long, but passes underneath the Tinsley motorway viaduct on land owned by Highways England. It also presented a chance to redesign the connection at the Supertram end, meaning that a proposed relocation of a tram stop was no longer necessary.

However, by the middle of 2016, SYPTE was admitting that there was still no firm date for the first tram-trains to run, even though the casual observer could see construction work under way with electrification masts planted and new track appearing. Finally, in December 2016, it was confirmed that the new programme envisaged tram-trains running by summer 2018. This is now the date everyone is working towards.

Rob Cairns is a Regional Director of Infrastructure Projects at Network Rail. During an interview with RAIL at the contractor’s compound, close to where gangers continue to work on the chord line between the domain of tram and train, it is clear that there have been more challenges with the technology than originally envisaged, although significant progress has been made.

“We’ve put the new programme on the table which shows a summer 2018 delivery,” he confirms.

“We have a number of engineering disciplines that are at various stages. Track is a good example of where we are substantially complete. We have a major signalling alteration which involves adding the new chord into Woodburn. The switch of the Sheffield Power Signal Box area to the York Control Centre has already been done. When tram-train is introduced it will be controlled from the chord by the existing Woodburn signal box, and change to the York Control Centre in the Rotherham area.” (These modifications were due to take place in May, as this issue of RAIL went to press).

But the reason for the delays is not in signalling, it’s in the wires. Cairns explains: “Network Rail spent about 12 months impact-assessing how we could use existing proprietary technology in order to deliver tram-train without having to commit to brand new technology, which the industry recognises takes a long time to develop.

“That process concluded some time ago, and we determined we simply can’t make this work without developing new products, new applications, and going through the safety case and approvals process. This is to allow the overhead line system to work.”

In other words, there are no off-the-shelf solutions for the overhead line. Given the vast national route mileage that has been electrified this might sound strange, but to deliver the future, it turns out that the team have been asked to see into it as well.

Once they begin to run, the tram-trains will use their 750V DC power mode both on the tram lines and on Network Rail.

“One of the aspects of piloting this scheme is to run 750V DC on Network Rail because we don’t have any. We’ve deliberately been asked to look at piloting various scenarios to help with future applications,” adds Coulthard.

“From day one, it made sense to specify as dual-voltage because in the longer term, investment plans mean at least half of the route they will operate over will be at 25kV AC - in their lifetime.”

All of this has meant diving into the lengthy approval process for developing new technology to which Cairns alluded.

Coulthard continues: “We simply can’t achieve a DC application with an AC proprietary system without developing new products like double insulation - things that will protect the AC system from the effects of DC voltages. That’s what stopped us taking products from the catalogue, and forced us to think again.

“It is complex when you mix DC and AC electrical systems together. They are hard to integrate. Where we’ve found most challenge is understanding: how do you deal with fault currents on a DC system when they are carried on an overhead line system originally designed for AC?

“The potential fault currents on a DC system can be significantly higher than on an AC system, simply because the DC supply voltage is much lower. Consequently, higher currents are needed to deliver the power to the vehicles. We’ve had to really heavily modify the AC system to cope with the higher currents. We’ve also had to prove we can deal with that current under all conditions, and not present that as a risk to maintainers, customers, operators and so on.”

Solving the problem has taken time, as evidenced by the project’s delivery dates slipping.

Coulthard tells RAIL: “I would say the products are not complex by their nature - they are components of steel work that you would look at and say ‘so what?’. However, it’s the engineering cycles you have to go through to prove that a component is capable of not just dealing with its normal current, but dealing with a working environment that will be presented under fault conditions. To prove that, you have to work out what those fault conditions would be and how they behave.

“You can’t take products to their final stages of approval unless you can talk confidently about the nature of the currents. The products themselves might look straightforward, but the process we have to get through to prove they are safe is complex.”

“The pilot has determined that we’ve just got to grasp the nettle on some of this stuff,” says Coulthard.