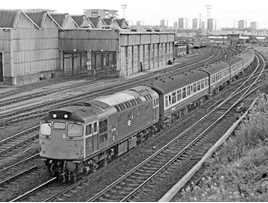 The use of the brand name Inter City by BR can be traced back to 1950, when the Western Region introduced a return Paddington to Wolverhampton Low Level service. The term was then adopted from 1957 to describe the revamped timetable between Scotland’s two principal cities.

In April 1953, the British Transport Commission’s (BTC) Chief Secretary recommended that the above proposals were taken forward and extended to take in the express timetable between the cities, along the former North British Railway (NB) corridor via Falkirk High. By October the BTC had approved the building of four eight-car DMUs (each with six power cars per set) to cover 13 trains per day each way.

The authority comprised 36 power cars and ten trailers. But by the time orders were placed for the power train equipment in September 1954, this had been revised to 31 power cars and 15 trailers, which included spare vehicles. These sets were described as replacements for the prevailing steam, and dubbed ‘Inter City’.

The Western Region (WR) had expressed an interest in acquiring similar vehicles for a revamped Birmingham Snow Hill to Cardiff and Swansea timetable. In consequence, Swindon Works was given authority for the design and construction of vehicles for both Regions’ requirements.

The final configuration became a three-car set, made up of two power cars and one trailer. Uniquely, one driving cab was full-width, while the other had a centre gangway to permit two sets to couple and create a six-car formation with access throughout. Both the full and half-width front ends suffered from unimaginative styling. Top speed was 70mph (the norm for all diesel-mechanical multiple units), but a non-standard control system meant the sets could not be coupled to standard-pattern DMUs.

Delivery was scheduled from December 1955 to August 1956, but wrangling between the two Regions over vehicle types meant that the first completed set was not viewed by the Minister of Transport until 1956. The public had its first sight of the new trains on January 4 1957, just three days before a limited service was inaugurated between Glasgow Queen Street and Edinburgh Waverley.

Contemporary reports refer to insufficient sets being available and a shortage of diesel fuel as the reasons why only a partial timetable could be introduced, deploying just two six-car sets. A journey time of 60 minutes for the 47 miles reflected both operating constraints on a congested route and the capabilities of the new trains. On-train catering was provided later, in 1957, and the aim was for a half-hourly timetable.

Steam traction was not eliminated over the route because some East Coast Main Line (ECML) trains started their journey at Glasgow Queen Street. Thus, as part of the spreading dieselisation of BR, in 1961 the Scottish Region’s (ScR) General Manager put in a bid for six Brush Traction Type 4s (later Class 47) to be based at Edinburgh Haymarket Depot, for working heavy Anglo-Scottish services between Glasgow and Edinburgh. However, this was rejected.

At a time of falling rail use, the new offering boosted traffic by an average of 7% annually, with market share rising from 42% to 59%. Responding to passengers’ travel preferences, a timetable recast in 1966 provided an hourly fast train each way, calling only at Falkirk High and Haymarket in 55 (eastbound) or 56 (westbound) minutes. There was also an hourly semi-fast via Falkirk Grahamston and five other stops timed in 70 minutes.

By 1968 the balance of travel preferences had shifted to a 47% share for both car and train, but construction of the M8 motorway between the cities was progressing. Consequently, in 1968 the ScR set up a planning group to manage a project to upgrade the inter-city services between Edinburgh and Glasgow along the ex-NB route, to bring these into line with similar facilities on other BR Regions.

Ministerial approval for a project costing £1.5 million was forthcoming in 1970. This included resignalling to raise line speed from 75mph to 90mph, while track canting and realigning and increasing clearances in Falkirk and Winchburgh tunnels raised local speed restrictions.

Although it is reported that the ScR wanted new DMUs, this was rejected on time and cost grounds because of the need to produce a brand new design. DMUs offered great flexibility in reversing direction at the termini, as well as potentially high utilisation, but prevailing technology could not offer an underfloor diesel engine of sufficient power for high-speed running. The most economical option was to have a locomotive powering a push-pull rake of coaches, and experience on the Southern Region indicated the viability of the system.

English Electric (EE) Type 3 (later Class 37) 6700 was fitted with the relevant equipment for remote operation, while a Corridor Brake Second coach had a driving cab installed and several coaches wired to permit the locomotive to be controlled from the remote driving cab. All the work was done by the Railway Technical Centre at Derby, with trials conducted between Edinburgh and Glasgow during February 1968.

Two months later, on April 7, new EE Type 4 (later Class 50) D405 was put through similar trials, achieving 100mph against the 90mph maximum of D6700. The ‘D400s’ had been equipped from new with circuitry for push-pull operation, but it did not work very well due to interference from the wiring for other electronic circuits. Embarrassingly, D405 suffered five engine shutdowns during the trials, and some nifty (and slightly irregular) action was needed by the EE technician riding the locomotive to avoid a failure. The circuitry was subsequently removed to reduce spurious engine shutdowns.

While the wiring interference issue could have been overcome, events elsewhere scuppered the ScR’s plans to use ‘D400s’ on its premier internal services. Trials were also made using a Class 47.

Concurrently, there was much debate between the BR Board and the Ministry of Transport regarding electrification of the West Coast Main Line (WCML) north of Weaver Junction to Glasgow Central. The prevailing timings for a single Type 4 diesel were not considered to be adequate for the 1970s, and schedules were produced for a pair of Class 50s and electric traction.

With public spending extremely tight at the end of the 1960s, electrification was ruled out and Type 4 double-heading settled upon. This meant that there would be no scope within Class 50 (or even Class 47) diagrams for use between Edinburgh and Glasgow.