‘Rover and out’ and about 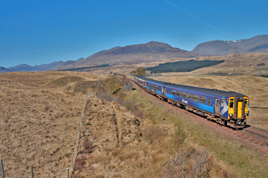 This consists of two networks linked by Scottish Citylink:

Bounded by Helensburgh Central, Balloch, Milngavie, Stirling, Falkirk Grahamston/High, Caldercruix, Whifflet, Lanark, Larkhall, East Kilbride, Neilston, Kilmarnock, Ayr and the Firth of Clyde Coast, plus Falkirk Grahamston-Cumbernauld-Motherwell. Valid only on ScotRail services. From 0915 but not valid out of Glasgow Central or Queen Street between 1643 and 1810. Also not valid on the 1815 Glasgow Queen Street-Falkirk High.

Bounded by Falkirk High, Stirling, Kirkcaldy, North Berwick, Tweedbank, West Calder and Bathgate. Valid only on ScotRail services. From 0915 but not valid out of Edinburgh or Haymarket between 1643 and 1810, except for the 1756 Edinburgh-West Calder. Also not valid on the 1815 Edinburgh-Falkirk High.

‘One-Ticket’ in the Edinburgh area

Run by local authorities in conjunction with over 30 bus operators, ScotRail, Virgin Trains East Coast and CrossCountry, in an area extending to Dundee, Perth and Airdrie, ‘One-Ticket’ is centred on Edinburgh. Tickets are available for unlimited travel for a week, month or a year. (Bus-only tickets also have a day version).

Oddly, although the bus area extends south to Hawick and Berwick-upon-Tweed, the rail limit remains Dunbar and the route to Tweedbank has not been added.

The ticket includes bus travel within the vicinity of a chosen station and unlimited rail travel to and within the Edinburgh zone (bounded by Dalmeny, Wallyford, Gorebridge, Curriehill and Edinburgh Park). It is NOT valid on Edinburgh Trams.