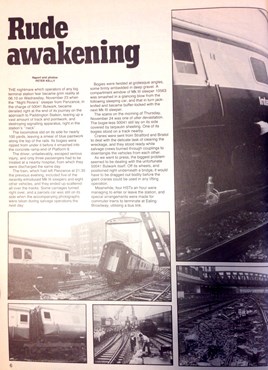 The ‘50’ slid for 100 metres, with its bogies ripped from underneath. It smashed into the ramp of Platform 8. Miraculously the driver escaped serious injury, while three passengers were hospitalised.

The Class 50 was taken to Doncaster Works and, following assessment, authorisation was given to repair it. The ‘50’ began its journey to Yorkshire on January 17 1984, but it would be January 4 1985 before it hauled a train (a test trip from Doncaster to Newcastle).

The locomotive would survive in traffic until April 1990, when it was withdrawn from the NSSA pool at Laira. It was scrapped by Coopers Metals at Old Oak Common in July 1991.

The coverage here is from RAIL in January 1984, and shows our on-scene access the day after the accident. RAIL.