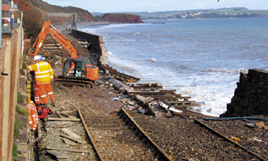 The phone rang at around 2200 on February 4. “The Sea Wall has collapsed at Dawlish.”

I was sceptical. There is often talk in the press or among locals of problems on the Sea Wall, when in reality the English Channel is just a bit more choppy than usual, and a tiny bit of masonry has become dislodged.

But this time I was wrong. Spectacularly wrong!

The iconic Sea Wall had been punctured not far from the eastern end of Dawlish station. An 80-metre section of wall had been destroyed. Waves had battered the Brunel structure with such ferocity that it collapsed, leaving the double-track Exeter-Plymouth rail line suspended, like a hammock. Neighbouring houses were evacuated as engineers sought to hold the sea back. Trains, of course, were cancelled.

Network Rail has buoys in the English Channel that measure the force of Mother Nature. They had not recorded anything like the fury she unleashed on the Devon coast that night - for the first time ever, a ‘black’ warning was issued.

Since then, Network Rail has been working hard to get things back in order. But engineers always have one eye on the weather.

This is February and March, and the weather in the West Country at this time of year is far from the picture-postcard images you usually see. It’s cold, wet and windy. The storms are ferocious. One local MP said that the South West peninsula was becoming the focal point for the weather. He has a point.

RAIL 742 went to press on February 12, at which point NR was unable to state exactly when the railway would re-open. The next day, Secretary of State for Transport Patrick McLoughlin said it would be open on March 18 - six weeks after the wall collapsed, which seemed reasonable. Privately, sources talking to RAIL hinted that perhaps six weeks was a tad cautious.

And then Mother Nature intervened again.

On February 14, more storms caused further significant damage. Another ten to 20 metres of wall was destroyed. Shipping containers that had been welded together, filled with sand and stone, and placed in the gap as makeshift sea defences were also destroyed.

“The temporary Sea Wall at Dawlish has been swamped by massive seas during the night, which battered and damaged the ten-tonne shipping containers forming the temporary Sea Wall,” said NR the next day. “Further sections of the old Sea Wall are destroyed, as well as a lesser secondary breach closer to Dawlish Warren.

“Our engineers are working in very difficult conditions, with work taking place on a six-hours on, six-hours off basis, designed around the tidal patterns,” said NR.

On February 17, the weather calmed down, prompting NR to state: “More concrete foundations will be laid today. The additional damage to the Sea Wall caused by Friday night’s storm will have an impact on the timescales for restoring the track - we anticipate a new assessment on the timescales by the end of this week.”

NR announced on February 19 that trains would not be running before “mid-April’. This falls into the start of Control Period 5, the five-year period during which NR has £38 billion to spend - RAIL 714, 735, 742).

There have been calls for the money allocated to HS2 to be spent on diverting the railway across Dartmoor, but these calls are misinformed - the money comes from different pots. The money NR will spend on the wall comes from the maintenance and renewals funding, while the re-opening via Dartmoor would also come from a Control Period budget. HS2, by contrast, is funded separately.

Back to the wall. On February 16, NR had stated that an additional four shipping containers had been put into place to protect the new damage to the Sea Wall. Scaffolding has been built to give workers better access to start repairs. A cable bridge is being built so that NR staff can pass services and equipment over the rail bed, to allow cabling to be reconnected. Machinery has been arriving since February 6, two days after the initial storm.

In the meantime, 109 miles of railway in Cornwall and Devon remain cut off from the rest of the UK.

All of which has led to calls for a diversion to be opened, with the most popular option appearing to be via Okehampton and Dartmoor. Rebuilding an 11-mile gap would be needed, but plans are already in place for a Bere Alston-Tavistock re-opening (this is progressing well), while the Okehampton-Exeter section is already open.

RAIL Fares and Services expert Barry Doe says: “In the late 1950s the fastest Up service took 93 minutes from Plymouth to Exeter St Davids, calling at Tavistock and Okehampton only. This wasn’t the ‘Atlantic Coast Express’ - that always took longer, as it called at 11 intermediate stations to give the main through train of the day to Waterloo.

“Bear in mind these were steam timings. If 93 minutes seems slow, non-stop trains from Plymouth to Exeter St Davids via Newton Abbot took 79 minutes in those days!

“By the mid-60s timings on the LSWR route had improved, and one daily train took 86 minutes calling at Keyham, Tavistock and Okehampton.

“Now, consider that the planned re-opening to Tavistock from Plymouth is showing a projected 27-minute journey-time, which is five minutes faster than the above. So I would assume today Plymouth-Bere Alston-Tavistock-Okehampton-Exeter could easily be achieved in 75 minutes with those three stops. That’s only ten minutes slower than on the Great Western route with three stops.

“I’d say that the original closure was one of the most ludicrous of the 1960s. Re-opening would not only offer a main line alternative route to the west, it would also open up access to the rail network from north Cornwall, and provide a direct route from the affluent town of Tavistock to London - either through to Waterloo in four hours or under three hours into Paddington with a change at Exeter.”

However, the proposed route at Dartmoor has a big viaduct-shaped problem - Meldon Viaduct.

Mike Nendick, communications officer for Dartmoor National Park, says the viaduct is a Scheduled Ancient Monument, which would mean the involvement of English Heritage, the government advisor on the historic environment.

Even if a decision does not rest with the Dartmoor National Park’s planning department, it would still be a consultee on the planning application.

Nendick tells RAIL that re-opening that line would be “a monstrous undertaking before you even start construction”, because there are tunnels and stations along the route that are probably now in the hands of private individuals. Would they be subject to compulsory purchase?

“The LSWR route is also part of the National Cycle Network, which means Sustrans also need to be involved,” he adds. He thinks an alternative route to Newton Abbot would be shorter and more efficient.

Passengers, understandably, have been affected by the disruption, although First Great Western has been trying its best. The operator is running buses directly from Tiverton Parkway to Plymouth (which takes about an hour), while others are leaving Exeter St Davids to serve the affected towns.

“It is good to see train companies accepting each other’s tickets, and lifting time restrictions on tickets where there is major disruption. Bus companies have also been helping out, and extra long-distance coaches have been laid on where rail services are affected.

“Passenger Focus is monitoring the quality of online information. And although there is a lot of good practice, the rail industry continues to struggle in this area. For instance, journey planners on February 10 were still showing some trains running via Dawlish - six days after the Sea Wall was destroyed.

“The immediate focus is rightly on restoring services as quickly as is safe to do so, but questions do need to be asked about passenger information accuracy and whether the level of investment in weather-proofing the railway needs to increase.”

Richard Burningham is manager of the Devon & Cornwall Rail Partnership. He tells RAIL: “What has happened at Dawlish is, of course, a big problem for those who want to get around by train, particularly in South Devon and Torbay. There will need to be a very big effort to get people back on the trains, and attract brand new users, once the line re-opens.