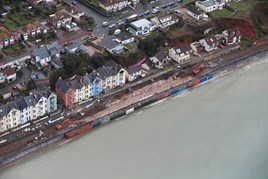 The severe storms on February 4 and 14 caused extensive damage along the 4.2-mile coastal route through Devon - none more so than at Dawlish, where the famous sea wall collapsed (RAIL 742, 743).

As well as the 100-metre breach of the sea wall at Riviera Terrace, there were smaller secondary breaches at Dawlish Warren and Teignmouth, and five landslips around Smugglers’ Cove.

Network Rail engineers have braved the elements to try to ensure the railway is back running as quickly as possible. They have installed 11 steel containers at the main breach, to serve as a temporary breakwater, while a scaffolding bridge was built to reconnect the Global Crossing Cable.

The main breach has been repaired with nearly 5,000 tonnes of concrete and 150 tonnes of steel. Some 200 metres of track has also been ready-built for installation.

The 300-strong team of engineers will now focus on installing 120 metres of large concrete wall sections, repairing 525 metres of parapet walls, and renewing 13 miles of cables between Dawlish Warren and Teignmouth.

Lead contractor on the breach repair was BAM Nuttall, while Sisk was responsible for the platform repairs, and Tony Gee, AMCO and Dyer and Butler were sub-contracted for other work. The Army and Royal Marines were also instrumental in several key parts of the project.