Ready for the ‘88’ revolution 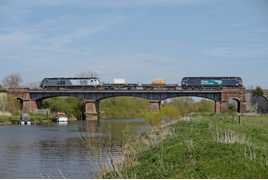 Direct Rail Services (DRS) was set up in 1995, a product of rail privatisation and the need for the safe, secure and reliable transport of nuclear waste from power stations to the reprocessing plant at Sellafield in west Cumbria.

It is a subsidiary of the Government-owned Nuclear Decommissioning Authority, but is not subsidised and has to be profitable. The 2014 accounts affirm this, with revenue of £65 million, net profit of £2.7m and net worth of £28m.

Having obtained its own Safety Case, it was soon appreciated that a handful of Class 20s and train crews lacked sufficient critical mass to be viable. This prompted a decision to look at other train operations that could be run profitably, but which would dovetail with the core business of the safe transport of nuclear waste.

A range of diesel traction was acquired, including the ubiquitous Class 66. However, while a good ‘mixed-freight’ traction unit, the latter has several drawbacks. Its 2-stroke engine is not as economical as alternatives and does not meet current EU emission requirements. Wheelset wear is also high and the cab environment not ideal.

This led DRS in 2009 to look at its technical parameters from scratch within the framework of increasing its estate, while supporting the core activities but without any subsidy. Transporting nuclear waste is forecast to continue until 2036, and the question posed was whether Class 66s could stay that course.

Tony Bush was appointed DRS Chief Engineer in 1998. He is not a career professional railwayman, but comes from the nuclear industry. This means he arrived with a fresh outlook.

Low initial cost had motivated freight operators to buy Class 66s, but costs had begun to rise significantly. This led Bush to a very careful study of life-cycle costs, because the ‘66s’ are not as cheap to operate as modern diesels.

Bush looked around for a design of diesel locomotive that would satisfy DRS’s traction needs to 2036. Within the UK, this included Brush at Loughborough and Class 70s. In Europe, Bombardier and Siemens were considered, but the state of the traction market and the quantity in which DRS was interested initially were adverse factors.

Rolling stock leasing company Beacon Rail Leasing suggested an approach to the Stadler Valencia factory, with which Beacon Rail had already done business. Stadler is a traction integrator, and so was prepared to build to a bespoke design. Bush had now found a locomotive builder that was willing to explore the implications of modifying its EUROLight platform (see panel, pages 52-55) to meet the restrictions of the British loading gauge and DRS’s specification.

The EUROLight prototype was taken to the Velim test track in the Czech Republic, so that Bush could see it put through its paces. This included spraying soapy water on the track ahead of the locomotive to simulate greasy rails and thus the adhesion capabilities. A test train of 2,000 tonnes was used, and the prototype proved able to start this load on soapy rails while working with only three of its four traction motors in use.

It was the attitude of the Valencia team at this stage that helped cement Bush’s view that DRS had found its preferred partner. Valencia’s engineers could draw on their experience with Class 67s for the modifications needed to the EUROLight to create the UKLight model. The work was not confined to the mechanical parts, but also included wiring and equipment specific to Britain’s railways.

The result is a design with a low centre of gravity and whose weight is evenly spread and well-balanced, which combine to contribute to minimise weight transfer between the axles when pulling a heavy train. This helps to ensure that the maximum tractive effort is deliverable consistently, which is not always the case with some heavy-haul designs.

It took Valencia 18 months to complete the redesign for DRS. Whereas the EUROLight is geared for a 75mph top speed, DRS wanted 100mph. This meant the axle-hung traction motors had to be relocated to the body in order to reduce the total unsprung mass.

Another DRS stipulation not included in the EUROLight was for an electric train supply, and the UKLight therefore had to have a suitable facility built into its power train. The maximum supply of 500kW was based on what would be required when hauling a West Coast Class 390.

And whereas DRS had envisaged a Co-Co wheel arrangement, the Bo-Bo EUROLight’s performance at Velim enabled Valencia to convince DRS that the required performance could be achieved with a four-axle traction unit.

In November 2011 DRS ordered 15 UKLights, leased through Beacon Rail Leasing Ltd, and these were given the TOPS classification of Class 68. Ten more were ordered in July 2014 and a further nine in 2015.

It took 28 months from the date of the first order to delivery of 68001. Four months were spent deliberating on the choice of the power train, while modifications were included - for example, to take account of the requirements of Chiltern Railways. Actual assembly of 68001 took four months, although now this phase takes only three.

Although the engine is thrifty on fuel, it was decided to increase the fuel tank capacity to 5,600 litres. This enables a ‘68’ to make a return trip between Carlisle and Dungeness (Kent) without the need to refuel.

Mounted on the diesel engine is an ABB traction package that uses a six-pole brushless synchronous alternator to supply two ABB Bordline CC1500 DE compact converters. Each converter has a rectifier to create an intermediate DC supply, braking chopper, and to drive electronics. The system is responsible for adhesion control via two traction inverters and one auxiliary inverter per package.

Each of the four ABB traction motors has its own traction inverter and is rated at 1mw (1,340hp, and so well able to cope with the engine output after allowing for transmission losses).

When DRS won the Tesco contract from DB Cargo, the inherited Daventry to Mossend train path was timed for a 6,700hp Class 92. A ‘68’ with roughly half the available power at rail was tested, and was only a few minutes adrift on the schedule. This demonstrates DRS’s objective of pushing the boundaries in terms of power, adhesion and speed.

The UKLight platform incorporates the same vehicle control unit and driver’s advisory system fitted in the EUROLight. Experience on the Velim test track and in the UK has proved the high adhesion specification and 317kN maximum tractive effort to be achievable.