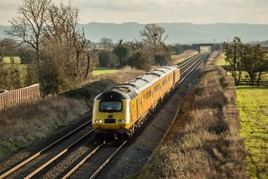 If Network Rail’s New Measurement Train ran over an old newspaper, you’d be able to read the headline - assuming you were watching the train’s onboard camera screens at the time… and your eyes could operate at more than 100mph!

Inside the Mk 3 trailers, systems work day and night as the set - nicknamed the ‘Flying Banana’ - adds terabytes of new information about Britain’s core main lines every shift. Criss-crossing the network, the NMT records data on key routes every four weeks. Over a year, it covers 115,000 miles.

It’s about as far from the traditional idea of a ‘ganger’ walking the track as possible. And the data the NMT provides is a major reason why the number of broken rails on Britain’s network declined by 2018 to less than a quarter of that when the train was introduced 15 years earlier.

Network Rail describes its NMT as “the most technically advanced train of its type in the world” - and that’s why representatives from overseas railways come to see it in action and learn about what’s been achieved. 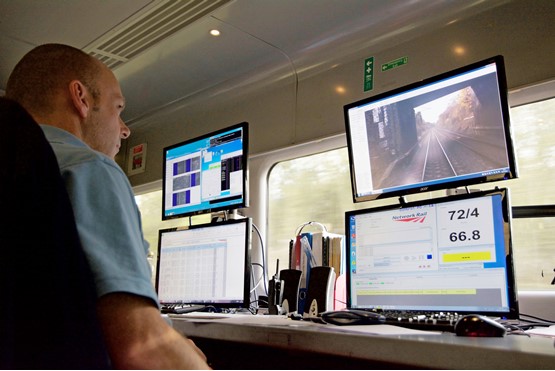 Why ‘Flying Banana’? Well, with its yellow engineering livery, the NMT is one of the most striking trains around. But its informal title has older origins. The millions of pounds worth of kit aboard the train and hanging from its underside may be leading-edge, but the set itself is a High Speed Train (HST) - a design that picked up the ‘Flying Banana’ monicker in its earliest blue and yellow ‘Intercity 125’ incarnation.

Elsewhere, these 1970s sets are increasingly reaching the end of their working lives, but this most banana-like of the HSTs continues to play a vital part in keeping the railway open - even though it’s the one you’re never likely to ride in.

As part of a 13-strong (64-vehicle) fleet based at Derby’s Railway Technical Centre, the NMT stands at the apex of a suite of NR survey trains. This also includes the NMT’s ‘little brother’, the Sprinter-based Class 950 Track Recording Unit that covers secondary routes and which is due to appear at the Rail Live event in June (RAIL 877).

These trains have been split into three categories depending on their speed - low, medium and high. For example, the Ultrasonic Structure Gauging train runs at 35mph - something it does at night.

Other than its bright yellow, the main visual clue distinguishing the NMT from other HSTs is not much to look at - a ‘bottle nose’ casing holding a high-definition forward-looking camera, mounted below the windscreen of each power car.

Yet looks can be deceptive. For the NMT carries a mix of recording equipment that enables it to gather a complete picture of the railway, all while slotting in among other traffic at line speed. Rather than needing a possession to carry out a survey, all the NMT requires for the job is a single path.

This train is the ‘poster child’ for a new way of doing things that has been developed over the past couple of decades. Initially complementing traditional methods, this technology-driven way of carrying out surveys is now seen as central to the way the railway works.

As NR’s Asset Information Services Head of Delivery (Data Collection) Steve Quinby explains to RAIL, during a surveying run around the Birmingham area: “Somebody used to have to walk down the track with some kind of measuring stick or gauge… and did it manually. We now do that from the train, using technology, at line speed in this case. And with far more discreet and accurate measurements down to sub-millimetre in some cases.

“We’re not having to deploy people out onto the live infrastructure to go and measure things. It’s safer. It’s more effective as well, to have this train covering the hundreds of miles that it can do in a single shift.

“We run these trains every four weeks now, pretty much around the vast majority of our network. And gathering that information on a far more frequent basis enables us to trend information much greater than we ever had before. So, we’re able to move from this ‘find and fix’ methodology that we had in the past to more ‘predict and prevent’, which is the holy grail of maintenance work.”

Quinby points to the accident caused by a broken rail at Hatfield on the East Coast Main Line in October 2000 as “a catalyst for a lot of change in the industry”.

He says one of the effects was that “we greatly increased the frequency of infrastructure measurement, we increased our ultrasonic testing fleet by four-fold, and came up with a far more robust plan. We actually have the ability now to be far more confident in the condition of our assets.”

So, how does the NMT actually work?

As well as its two power cars, the rake comprises five vehicles: a pair of mess cars, a conference car, and the two coaches that carry out measurement and recording (known as the ‘Development Vehicle’ and ‘Production Vehicle’ – see panel).

In terms of the track, the NMT can monitor key potential problems such as twist, gauge and cyclic top (dips in the rail surface).

One of the train’s core capabilities is provided by the Plain Line Pattern Recognition system, generally known by its initials PLPR. Developed over the past five years or so specifically for this purpose, PLPR employs seven cameras plus lasers to record in fine detail the track that the NMT passes over.

The cameras take individual pictures every 0.8mm - meaning 70,000 images per second at 125mph. This information is then fed through onboard image analysis software, which uses algorithms to check for anomalies that could identify potential track faults - for example, a missing track clip. Such anomalies are then flagged up for a ‘manual’ check against the seven images taken.

However, these anomalies might not always indicate a problem - perhaps if a newspaper or piece of ballast were to obscure a clip in an image.

This is where the cameras are complemented by a laser scanning system - by being able to ‘see’ through such obstacles, light detection and ranging (Lidar) allows an operator to discount such bogus ‘flags’.

The amount of information collected and processed by the PLPR is huge - the images it generates are 2,048 pixels wide… and 30 miles long.

However, PLPR is just one of seven individual measurement systems on-board. Nor is it the only one to employ lasers.

A second is the Fraunhofer non-contact overhead line inspection system. Rather than looking downwards, this uses lasers and cameras to measure the position of overhead wires (including stagger and height) using triangulation. Oxidation is monitored, and the ‘flat’ area on the wire can be measured to within 0.3mm - the greater the ‘flat’, the greater the wear.

Since the Fraunhofer system does not involve contact, the NMT measures wires in their ‘unloaded’ state. ‘Loaded’ wires are checked using NR’s specialist overhead line test vehicle Mentor, which is fitted with a pantograph.

Track geometry is measured using transducers and accelerometers, with 47 sensors connected to the train’s bogies (a system that is also connected to the PLPR). Further equipment checks the coverage of the GSM-R radio network.

Then there is camera-based monitoring of the ballast shoulder, and the forward-facing cameras on the power cars. These allow the line to be checked for foliage, scrap or other debris - as well as being used to evaluate signal sighting.

A further piece of kit is ground-penetrating radar. In contrast to a manual check, this can give a clear picture of the formation 6ft down.

Faults identified by the NMT are then categorised as to how urgently they need attention. Anything that might need a complete ‘stop’ is considered to be extremely rare, because it will almost certainly have been found before that point - but others might be listed as needing attention within 60 days, seven days… or even 36 hours.

Accurately recording the train’s location is also essential to its survey work.

In the past, achieving the precision offered by the NMT would have been a challenge - due to such elements as missing or wrongly placed mileposts, or the effects of wheel wear on mechanical distance recorders.

However, the NMT has a mapped real-time positioning system that takes data from 15 satellites and is accurate to within one metre. If the GPS signal should temporarily drop, position measurement then switches to a tachometer drive. And although not the primary reason for its collection, the detailed positioning data so gathered has been used to generate accurate gradient profiles.

Given all this recording activity, it’s perhaps not surprising that the NMT collects a vast amount of data - around 10 terabytes for every 440 miles travelled.

Operation of the NMT is undertaken by NR’s Asset Information Services and governed by an internal contract within the infrastructure owner, with the train running to a pre-defined diagram. Reliability has been 97%.

The contract allows 72 hours from the moment the data is recorded to the relevant information being sent out to the ‘customers’ - NR’s Routes. Over Control Period 6, which started in April and runs to 2024, the NMT is expected to cover 975,000 miles. The aim is to increase the use of PLPR inspections to 15,000 miles of track, from the previous 8,500.

As well as improving safety, NR argues that there is a financial benefit to the NMT. Indeed, it reckons its monitoring fleet collectively saves the railway millions of pounds, by avoiding unnecessary maintenance through enabling ‘predict and prevent’. By February this year, the estimated saving through using PLPR alone was £2.2 million.

Recording frequencies are defined by laid-down standards, with the core lines (and this means running lines, not routes) being specified at every ten weeks.

Schedules are devised so that the train actually traverses them every four weeks. This means that a spare trip remains within the system, if (for whatever reason) a run becomes impossible - that could even be due to something such as a suicide throwing timetables awry.

If the second trip is also missed, potential remedies could include rescheduling an inspection (if possible), or possibly even a manual check.

Initial planning takes place two years in advance to ensure the paths for the NMT are included in the working timetable. And although nominally based in Derby, the train is frequently many miles away - it has three shifts with (in general) one shift ‘on’, one ‘off’, and another travelling. Nights in hotel rooms are a normal part of life for the NMT crews.

When the NMT first ran in 2003, the intention was for the data to be processed onboard. However, it was later concluded that a moving train didn’t offer the best environment for data analysis, and this now takes place in either Milton Keynes or Derby. At the latter, two shifts work in a specially created facility which opened in January.

Quinby describes the process as “quite a logistical challenge”, adding: “We run pretty much a ‘24/7’ operation apart from Christmas Day and a few days thereafter. We’re recording something in the order of three to four million miles of data every year.”

What about the future of NR’s surveying operations?

“I think the size of the fleet has to be under constant review, but the other strand to that is to look at different ways of doing things in the future,” says Quinby.

He argues that those could be “less intrusive”. For example, unattended monitoring systems might be fitted aboard scheduled passenger trains.

However, for now at least, the NMT remains central to a fleet that “has gone from, I think, a complimentary kind of service to the maintenance of the railway to a core critical one. We really rely on this train now - it drives much of the activity, whether it be maintenance or whether it be renewals within Network Rail.”