FROM THE ARCHIVE: Olympic sprint 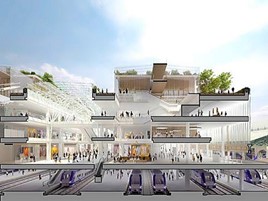 Passengers travelling from London to Paris will notice changes at their French destination from next year.

Gare Du Nord, the terminus for Anglo-French Eurostar services, will be transformed over the next five years ahead of the 2024 Paris Olympics.

SNCF operates the station and will start work in autumn 2019 to begin extending the station. Due for completion in late 2023, the station will be the largest in Europe.

SNCF Project Director Stéphane Cougnon tells RAIL: “With a budget of over 600 million euros [£526m], we’ll have the resources we need to deliver on time, and that’s the real challenge!”

He says that the task is to “push back the walls” at the station, and to add to its height without distorting its historic architecture. Much like British terminus St Pancras International, the station is renowned for its stunning façade. In France, it qualifies as a national heritage site. 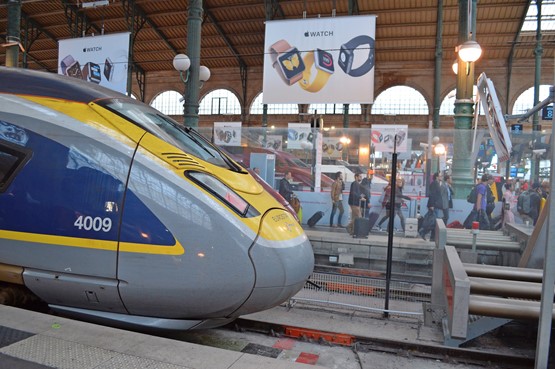 The station opened in 1846, and has been renewed four times so far. This fifth expansion will prepare the station for the demands of the next 30 years. Cougnon says it will open new spaces and traffic flows, while also providing more services and shops.

One of the busiest stations in the world, it’s used by passengers travelling to international destinations, as well as in France. Below it are the suburban platforms, which increase the number of passengers it deals with to 222 million a year (750,000 per day). This makes it the busiest in Europe, and Cougnon says: “We want to reduce crowding because the station is struggling to cope.”

Of those 750,000 daily passengers, some 600,000 are from Transilien commuter lines serving the Paris region. The others use high-speed rail services to and from destinations in France, Eurostar, or Thalys-operated services.

The plans encompass changes to the Eurostar platforms. The departure lounge has only just been refurbished, so will remain unchanged.

Says Cougnon: “We aim to expand the station to two and a half times its current footprint. We’ll make changes to the Eurostar Terminal on the west, as well as to the station’s east side, which handles most of our commuter traffic.”

He says that the plans include keeping passenger arrivals and departures separate, and guiding all main line departures to a new terminal that will be housed in a new building constructed alongside the station’s eastern façade.

Cougnon says that local residents will benefit as new amenities are to be included in the plan. The idea is to make the station more than just somewhere to catch a train - it will be a destination station in the same mould as St Pancras or New York’s Grand Central.

“By 2024, Gare Du Nord will include 50,000m2 of retail outlets and activities, including sports, recreation, culture and art, plus many co-working spaces.

“Visitors will be able to choose from a wide range of food and beverage options, including two restaurants located on the roof.

“Sports lovers will have a gym, and the roof will also feature tennis and paddle-ball courts, a 1km fitness trail skirting the façade, and over 7,000m2 of green space.

“Last, but not least, we’re rethinking intermodal mobility in the area around the station, and are building a 1,200-space

What kind of passengers use the station?

The numbers have been rising steadily, says Cougnon. This is attributed to connections with the Paris Metro and RER suburban lines, as well as the recent arrival of lines serving the city’s suburbs and European destinations.

“The 750,000 travellers who pass through Gare Du Nord every day are using three metro lines, three regional lines and over 2,130 trains a day, including both high-speed Thalys and Eurostar services, and inter-regional and main line trains.”

He says it’s this diversity that makes the station unique - and the way it meets a wide range of passenger needs.

In addition to the features already mentioned, it will be transformed into what Cougnon calls “an intelligent, connected station, as a smart grid city takes shape, with customised digital solutions developed by the station’s ‘digital factory’”.

Accessibility will be improved with 55 lifts and 105 escalators - more than double the current number.

SNCF is also rethinking the connections to the city, to include a new eastern façade on rue du Faubourg Saint-Denis, allowing direct access to the departures terminal, which will also be linked to a new bus station.

Cougnon isn’t finished: “That’s not all - and this is important: the new retail outlets and services inside the station will have a regenerative effect on the neighbourhood around it.

“Plans call for nearly 20% of the new retail and service space to be occupied by food and beverage outlets, with striking, historic sections of the station reserved for upmarket restaurants overlooking the rooftops of Paris.

“Meanwhile, a European academy of culture will occupy more than 2,000m2, and we’ll have an auditorium of around 1,600m2 for special events and concerts. In response to strong demand from business, we plan to expand the current business space at Gare Du Nord to 5,500m2. In all, retail and service space will increase five-fold.”

Cougnon says that in keeping with changes in society, SNCF is installing a gym, paddle-ball and basketball courts, and a putting range alongside the rooftop fitness trail.

“We’re also making the station a beacon of eco-friendly development. It will have 7,000m2 of green space and 3,200m2 of solar panels.”

He says that Levels 4 and 5 will be a timber construction, and the new station will be built to meet the demanding BREEAM In-Use standard (an environmental assessment methodology) for sustainability.

For Eurostar passengers, Gagnon says that the operator’s terminal will remain in the same location, in the historic part of the Gare Du Nord building, but that “the project will improve access significantly, boosting capacity and effectively doubling the size of the terminal.

“Crucially, this will provide more seats for travellers, as well as space for additional shops and services. We’ll also increase the number of access points, and add a third boarding bridge to improve passenger flow from the platforms to the trains. We are aiming to deliver these upgrades in 2022. The newly renovated Eurostar business lounge will stay as it is - attractive and comfortable.”

There are concerns, admits Cougnon: “We’ll be meeting deadlines in a tightly constrained environment while having to keep the impact on rail traffic to a strict minimum.”

He points out that in just five years, SNCF must triple the size of Europe’s busiest station without closing it, while also continuing to ensure “maximum comfort and minimum inconvenience for our passengers. Achieving all of this without closing the station is a huge technical challenge.”

At the same time, SNCF Group will also carry out work on the entire northern corridor ahead of the Olympics.

“We’ll need to be extremely efficient - and that’s why SNCF is using innovative project planning methods to ensure that Europe’s busiest station is ready for 2024.”

This will be a tough job, but the benefits could be huge for both passengers (including those from the UK) as well as the local neighbourhood.