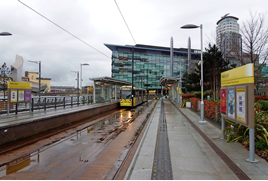 Anyone who has visited Manchester over the past few years cannot fail to have noticed the huge expansion programme taking place on the city’s pioneering tramway, Metrolink. Owned by Transport for Greater Manchester (TfGM), the system has tripled in size over the past six years, making Metrolink the largest tramway in the UK.

Having decided against building the Picc-Vic (Piccadilly-Victoria) tunnel in the 1970s, due to the high costs of tunnelling beneath the city streets, transport planners in Manchester began work on what would become the first second-generation tramway to be built in the UK, trams having fallen out of fashion during the mid-20th century. Indeed, Manchester had an extensive tramway network around the city before it was closed in 1949.

Metrolink celebrates its 25th anniversary in April 2017, and the ‘new’ tramway has been through quite a journey over the past quarter-of-a-century.

The first phase between Bury, Manchester Piccadilly and Altrincham opened in stages between April and July 1992. Phase 1 entailed the conversion of two popular British Rail commuter lines (Bury to Victoria and Manchester Piccadilly to Altrincham), for operation of Metrolink’s new fleet of 26 Italian-built Firema T68 light rail vehicles (trams - numbered 1001-1026). The two lines were linked by a section of street running tramway through the city centre streets.

Both BR lines chosen for conversion to Metrolink Phase 1 were selected due to having elderly rolling stock in need of replacement, and in the case of the Bury line a unique but outdated and costly to maintain 1,200v DC side-contact third rail electrification system.

Metrolink proved to be incredibly popular. After just a few months’ service, frequencies had to be increased to cope with demand - especially during the day between the morning and afternoon peak periods, which had traditionally been much quieter during BR operations.

Indeed, daytime demand for Metrolink was almost as high as the commuter peak periods, and a six-minute core service was soon in operation from 0700 through to 2000. Outside of the peak service, trams were operated to a 12-minute frequency.

Other benefits of the modern tramway included fully accessible trams, stations (known as tramstops) and platforms, making it suitable for users who had previously found it difficult to use the BR services.

Phase 2 of Metrolink’s development was construction of a new line through Salford Quays to Eccles seven years later. This deviated from the Altrincham line at Cornbrook junction (a new tramstop was also built at Cornbrook, which hadn’t existed when Phase 1 had opened in 1992, to serve as an interchange facility). The first part of the Eccles line, through Salford Quays to Broadway, opened in December 1999. The second section to Eccles was completed seven months later.

Six new Ansaldo T68A trams (numbered 2001-2006) were purchased for use on the new line, although these were only sufficient for the basic 12-minute service frequency, which required all six trams to be in use every day. This did not provide any spare capacity for trams being out of service for maintenance or repairs, and so the operator of Metrolink subsequently modified three of the original T68 trams (1005, 1010 and 1015) to enable these to be used to supplement the T68A fleet when required, especially as reliability of the new T68A trams was poor when they were first introduced.

Greater Manchester Passenger Transport Executive (GMPTE - now TfGM), decided to seek Government funding for further expansion of the tramway. GMPTE proposed a series of new lines to make Metrolink a true transport network, with the Phase 3 expansion to be promoted as the Metrolink ‘Big Bang’.

Under the proposals the existing ‘Oldham Loop’ line between Manchester Victoria and Rochdale would be converted for Metrolink services, with a diversion to the line running through Oldham town centre (removing the section of line between Oldham Werneth, and through two tunnels to Oldham Mumps).

Meanwhile, at Rochdale the line would leave the railway formation at Newbold, running alongside Network Rail lines into a new stop built adjacent to Rochdale railway station, before a short extension would take the tramway into Rochdale Town Centre to link with the shopping facilities and the town’s bus station.

This line would also serve the Sport City developments that had been built for the 2002 Manchester Commonwealth Games - the cycling Velodrome and a large football stadium (now the Etihad Stadium - the new home of Manchester City Football Club).