Network Rail's eye in the sky 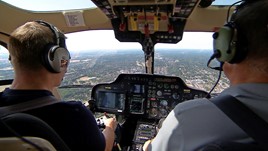 Cleared for take-off. Network Rail’s fault-finding team strap themselves into the helicopter.

At Fair Oaks Airport near Chobham, in Surrey, they go through the pre-flight checks. Andy Stillwell sits alongside pilot Darren, and passes the sick bag - just in case.

His previous job was based in the regional operations centre at Three Bridges. Now he’s adjusting his sunglasses and the inaccurately named ‘noise cancelling headset’.

Stillwell’s cameras are in a large gyro-stabilised binnacle mounted beneath his feet. In front of him is a large viewing screen. He operates the kit with what looks like a games console.

We’re off. Rising over the elegant McLaren Technical Centre and heading for the suburbs of south London. Today’s task is to follow the South Western Main Line from Wimbledon to Woking.

Even a cursory scroll through social media will illustrate how often passengers get caught out by infrastructure problems on this route. It’s the busiest line into Waterloo, and each time something goes wrong it affects tens of thousands of passengers. Performance has been poor… and is getting worse.

Following the Thames and then over Richmond Park, over Wimbledon station the pilot turns south and slows right down.

Stillwell is about to say: “Off we go then.”

But he swallows his words: “Well, how about that!”

Barely a handful of seconds into his survey, Stillwell has found his first fault: “That, gentlemen, is a hook switch. That’s a device which transfers electric power from the cable to the third rail. As you can see, it is glowing on my screen. It shouldn’t be that hot.”

Stillwell flicks the camera between normal vision and infra-red thermal imaging. He then overlays location data and starts recording.

“You can see I’ve locked the camera onto the location. So, however the helicopter moves around it, the camera stays in the same position.”

This is hugely impressive. We are hovering 1,000 feet up in the air, and to one side of the railway line. Yet Stillwell’s screen is completely filled with a pin-sharp colour image of something the size of his fist.

He flicks into thermal mode, and it looks like an explosion of heat. Something is clearly very wrong with the switch, yet a normal camera would not detect it at all. Even someone walking close beside it would be unlikely to pick up the fault.

It is a few hundred metres south of Wimbledon station. Trains pass incessantly.

“That’s a difficult one for the engineers,” he observes. “If they have to turn off the power to get to the tracks there, it could be very challenging. Let’s hope that one can wait until after the last train at night.”

Stillwell tells the pilot to carry on south. But within three minutes, he finds another one.

“Just under the bridge,” he says, pointing at a minute dot on his screen. It’s at Hampton Court Junction. He zooms in so that 1% of the image suddenly fills the picture. Sure enough, almost hidden in the shadow of a flyover, there’s another hot hook switch.

“We are 1,000 feet up and more than half a mile away from the bridge. But at that distance the camera can read a car number plate with ease, or the serial number on a piece of railway kit. Signal numbers, points identification plates. In addition, the laser system linked to GPS can pinpoint a location with extreme accuracy.

“It’s quite similar to the cameras the police use on their helicopters. But ours is probably a bit more powerful than the police use.”

The helicopter can fly for two hours or so at a time. The camera kit is heavy, and eats into the fuel supply - it’s like carrying a couple of extra passengers.

Says Stillwell: “If we’re travelling at 50 to 60mph, we can cover the entire route to Bournemouth in one trip. And we can do so in daylight while the trains are still running.

“On a typical flight we will find half a dozen or more faults, depending on how long it has been since we last flew the route. We are never going to replace boots on the ballast - there will always be a need for people on the ground. But we can pinpoint where the problems are. Rather than having guys walking for a month of Sundays, we can direct them to where the issue is.”

Stillwell looks outrageously fit. He does triathlons. Handy, as the temperature inside the helicopter is stifling on a sunny summer’s day (the 30° air temperature outside is cool in comparison). After working in a windowless control room, this must be about as good a job as you can find anywhere on the railway?

“I think the novelty is wearing off,” he replies.

“The pilot gets the luxury of looking out of the window and enjoying the view. I spend the whole time looking at the screen. I can’t take my eyes off it for a moment. Quite often I lose track of where I am, because I am concentrating so hard on looking for problems.

“This isn’t a job for anyone who ever gets remotely airsick. You’re not able to look around. For some people this job would make you really unwell, believe me!”

It also means a life in hotels. Network Rail only charters one aircraft from PDG Helicopters. And because of the short range, it often means a different Premier Inn each night of the week.

The crew do six days at a time, mostly out of small airports and airfields. Hire cars are lined up to meet them, because hotels are rarely located close to places that have no scheduled airlines. In fact, after the Wessex Route is done, the next stop two days later is in Scotland.

The job done, we return to Fair Oaks. The refuelling tanker is already waiting.

A small child is watching from the Hangar Cafe. His grandfather has brought him along for something to do during the school holidays.

Stillwell and pilot Darren escort him over to the helicopter. They sit him in the pilot’s seat and do up the harness. The boy has a grin wider than the rotor blades.

“One of the great things about this job is you get to be an ambassador for the railway,” says Stillwell.

“We’re a public face of the company, and we can explain a bit about what we do. That lad and his guardian are going home with a new enthusiasm for the railway, and we’ve told them a bit about safety.”

“We operate one of the most intensive networks in the UK,” he explains.

“We get the helicopter about once every six weeks, and we find faults on 90% of the flights we do.

“We look out for trespassers, too. But mostly this is about finding faults before they occur. It’s about the speed and geographical scope we can cover. Also, we don’t want our staff out walking on these busy tracks any more than is necessary. This is a safer way of working.

“We get a much better-quality image from the air. The elevation gives the camera a clean view of the railway. And the equipment is heavy - it is easier to put it in the helicopter than it is to carry it along the tracks. This is a much better quality of inspection than we would get on the ground.

“The images are now being sent to the control centre in Basingstoke. They can assess the urgency of the problems and come up with a response plan.”

That response plan turns out to be an emergency possession to replace overheating hook switches, and the following night RAIL is out with the track team.

The rendezvous is at 2300, at Raynes Park depot in south London. After an hour and a half hanging around, it’s a half-hour drive from the depot to a site near Ashtead station in Surrey.

The team does not get the track until after the last train has passed at 0030.

Then it takes a further hour for the team of four to confirm the track possession with the power switched off. Thereafter, it’s a routine job.

“The hook switch has been identified by the helicopter, so here we are changing it,” explains team leader Peni Togotu.

He holds out a blackened bolt that had attached the unit to the track: “It looks like it has been burning for a few days. If we left it for another week it would probably cause some problems, some delays.”

The problem is on the Up line, but the team changes the matching switch on the Down side as a precaution. Each one only takes 20 minutes. But with the time taken to make the third rail safe to work on, for this gang it’s most of their night’s work.

“We have to take detailed steps to isolate the equipment,” says project manager Jack Roberts. Normally he ‘drives a desk’, so he’s relishing being out in the soft rain at half past two in the morning.

“We have to block the lines to prevent trains running through, and put measures in place to stop any accidental re-energising of the line. These guys have two to three hours working time on the track each night. Sometimes they have longer at weekends.

“And in an emergency situation during the day, they can sometimes complete a hook switch replacement in 20 minutes.”

The track is reopened well before the first train is due to appear at dawn.

This whole task, from initial helicopter observation to completion of the repair, has taken a little under 48 hours. Without the thermal imaging eye in the sky, the potential problem might not have been spotted before the fault became a failure that would have disrupted tens of thousands of passengers, perhaps for many hours.

So, Network Rail thinks the high cost of chartering the helicopter with its highly specialised crew is more than justified.

It’s perhaps like going to the dentist for some preventive treatment. Better to catch the problem early and deal with it, than wait until it really starts to hurt.