Missing link - and a new landmark 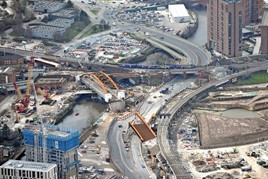 The Ordsall Chord in Manchester has transformed connectivity across northern England, by joining the city’s three main stations together for the first time.

Having opened on-time and on-schedule in December 2017, its delivery has subsequently been described as a textbook Network Rail project.

The Great North Rail Project, of which the 300-metre rail link is a central part, will ultimately enable 700 more trains to run on the local network each day, carrying 44 million extra passengers and bringing up to £46 billion worth of wider economic benefits to the region per annum.

But despite its success, the scheme’s initial design proposal was met with stubborn resistance, making the journey from conception to completion a highly eventful one.

When RAIL first visited the construction site in October 2016 (RAIL 811), it had been exactly 12 months since the final legal challenge to the Chord’s use of land owned by Manchester’s Museum of Science and Industry (MoSI) had been defeated.

Because of the tightness of the required curve radius and the steep gradient between the two lines at either end, there was no alternative - the Ordsall Chord needed to cut across MoSI’s short rail link to the main line.

This link once formed part of the world’s first passenger railway, which opened between Manchester and Liverpool in 1830, and contained original Grade 2-listed structures such as the iconic ‘Zig Zag’ viaduct that would need to be partially demolished.

Former Institute of Civil Engineers president and NR design consultant Mark Whitby lodged a series of objections and applied for a Judicial Review, before being finally refused Leave to Appeal by the High Court in October 2015.

Single-handedly, Whitby had successfully managed to postpone by over six months the arrival of contractors from the Northern Hub Alliance that had been formed to perform the task. NR as forced to put back the project’s completion date by a full year, to December 2017.

NR’s legal team prevailed not only by proving the enormous operational benefits presented by the Ordsall Chord, but also the scheme’s potential to bring heritage assets back to life. These included full restoration of the previously hidden Grade 1-listed Stephenson Bridge that had also carried the world’s first fare-paying passengers in 1830.

It has also created seven new structures in this previously derelict and under-utilised area to the west of Manchester city centre, including the first asymmetric Network Arch to be installed in the UK as its centerpiece across the River Irwell.