Metrolink ready for a new order 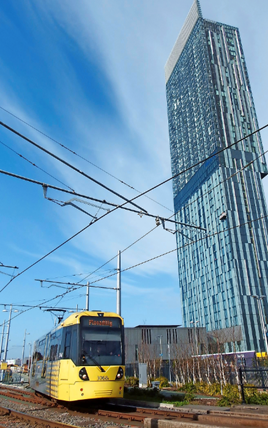 From spearheading the industrial revolution more than two centuries ago, through to its more recent domination of both the UK music charts and the English domestic football scene, Manchester is a city that’s grown accustomed to being in pole position.

That statement also holds true for light rail, with Manchester Metrolink now undisputedly the UK’s largest system, having undergone two significant expansions since the first line opened between Bury and Altrincham in April 1992.

The latest of these was completed in February 2017 following the opening of the Second City Crossing (2CC), which was needed to facilitate the addition of three new lines to the existing system. Dubbed ‘The Big Bang’, this £1.5 billion Phase 3 extension programme took eight years to complete, and boosted the network’s size to more than 60 miles of track serving 93 stops, which collectively hosted an impressive 37 million journeys in 2016. Cementing its primacy even further, preparatory work began in January to add a further 3.4 miles to Metrolink, once a £350 million extension to the Trafford Centre opens in 2020.

Outgoing Metrolink Director Peter Cushing has overseen much of this expansion. He stepped down in March after four eventful years at the helm, and a decade in total of working with the organisation. He has been succeeded by former deputy Danny Vaughan, a move that coincided with a shift in focus from construction to consolidation, and the delivery of further service and operational improvements.

At the top of Vaughan’s in-tray is a change of operator in July, when the management contract with current encumbent RATP Dev Ltd expires. The incoming operator is joint venture KeolisAmey, which beat off three rival shortlisted bidders to win an operations and maintenance deal that will run for up to ten years. KeolisAmey already operates London’s Docklands Light Railway, and has pledged to create 300 new jobs - including apprenticeships and traineeships - to increase security, improve customer service and lead a crackdown on fare dodging.

To ensure a smooth and orderly transition, Cushing has stayed on in a part-time capacity to assist Vaughan until the summer, and minimise any possibility of disruption for management, staff or passengers.

Cushing explains: “I’m doing a piece of work to see the old operator out, in the nicest possible way, and that’s going pretty well at the moment. KeolisAmey takes over on July 15, so I’m working between now and then to make sure everything’s covered.

“There’s a lot of contractual stuff to do, and a lot of ancillary contracts to be novated and changed. There’s also the impact on people that needs to be managed because it can be quite unsettling to have a new party taking over. The fact is that not much will change for employees, but I’m doing a lot of work with them nonetheless.

“What we’re looking for is a seamless transition to the new operator. The average person buying a ticket in the morning isn’t going to notice anything different on July 15 - it’s like when you’ve got a favourite pub and the landlord changes. The brown stuff coming out of the tap stays the same from one day to another.”

Although Cushing stepping down marks the end of a huge capital programme for Metrolink, the size of the task facing the new man at the helm remains considerable.

Focusing more on the operating business and what Vaughan calls ‘the steady state’ should not be seen as a lack of ambition by the system’s owners Transport for Greater Manchester (TfGM), he warns, and there’s a wide range of complex and demanding programmes for him to sink his teeth into.

Not least of these is the Trafford Park extension which, although only 3.4 miles long, looks set to be one of the network’s most patronised routes by calling at Manchester United’s Old Trafford football ground (capacity 75,000), the Imperial War Museum, EventCity exhibition centre and the UK’s second-largest shopping complex, the Trafford Centre. It will also traverse what is still one of Europe’s largest industrial estates at Trafford Park.

Says Vaughan: “Although we still have extensions in the pipeline and a capital programme, it’s certainly not as big as it was, or as intense. We opened 2CC a couple of months ago and that was the last piece in the puzzle of the Phase 3 expansion. We now have a shift in emphasis to bringing in a new operator and focusing more on bringing about incremental improvements in reliability, customer service and a greater focus on asset management.

“That said, we’ve got a hell of a lot to do now that we have legal powers to start work on the Trafford Park line, which goes to a pretty busy place and cuts across a number of large stakeholders. We’re also establishing a renewals programme because, as you can appreciate, although we’ve built a lot of new lines, the original Bury and Altrincham lines (opened in 1992) are quite old now and require new investment.

“We’re still looking at places to continue to expand the network, but we now need to make best use of the network we’ve built, and to start to grow patronage on these lines and then deal with those challenges. Building 2CC to accommodate all the new lines kind of shows we’re reaching a capacity point, and that we can’t continue to add quickly and easily. We need to take it more slowly now, and consider where will benefit most from any future investment in Metrolink.”

Turning his attention back to the new operator KeolisAmey, Vaughan outlines what made theirs the winning bid in a highly-competitive tendering process. Following the rapid expansion of the system, he is also keen to manage passengers’ expectations, adding that improvements will take months rather than weeks to materialise, and will be gradually and carefully implemented rather than being rushed.

He adds: “Passengers aren’t going to see anything different on July 15 compared to July 14, but they will notice what happens after that time. We’re busy ensuring that the transition happens smoothly, and then a lot of work starts in terms of a change in systems and the recruitment of more people into the areas of sales, operations and engineering. All of this will come to fruition a couple of years down the line.

“In terms of the bid, it was about getting the right balance between price and quality assurances, and the tendering process was deliberately set up to give us the best combination of these things, the optimum solution if you like.

“We’ve ended up with a proven partnership from KeolisAmey. They manage the DLR together, and Amey also does a lot of infrastructure work on the London Underground. What was also impressive about their proposal were the examples they supplied of how they’ve improved reliability and invested in continuous improvement elsewhere. That’s exactly what they’re proposing to do here, looking at whole-life costs, modelling, asset management and rolling reliability.

“If there’s one thing passengers want more than anything else, it’s a reliable service, so we’ve done a lot to improve that over the last few years and I think this partnership will go a lot further.”

The new contract is also structured to maximise the return on investment made by TfGM in trebling the size of the network, adds Vaughan. With almost all of the £1.5 billion price tag met from publicly funded grants or loans, the business case put forward by TfGM to secure that funding will now come under close scrutiny from local and central government in order to assess how this translates into economic growth and increased ridership, as improved public transport gives better access to jobs, business, retail and leisure opportunities.

Vaughan says the management contract with KeolisAmey will play an important role in attracting and maintaining this increased ridership, through the delivery of key outputs such as improved security and operational reliability. The inclusion of targets for condition monitoring and enhanced asset management is also intended to minimise TfGM’s ongoing infrastructure costs in what Vaughan believes to be a prudent deal for the taxpayer.