Media on the move 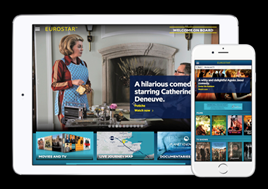 Long-distance high-speed trains carry a variety of passengers, from business travellers to day-trippers and families. The one thing they do have in common is that most want to use the internet during their journeys. In the UK, Virgin Trains was acutely aware of this issue, and so it joined forces with GoMedia to launch the BEAM app, which enables passengers to stream media to their mobile devices regardless of external signal coverage. On railways, the signal drops a lot, so this innovation is a blessing for both business and leisure travellers.

Connectivity is vital, and it has been for a number of years. Operators aren’t oblivious to that fact, but a workable solution has proved evasive.

The issue of connectivity is most acute on a high-speed railway. The tracks might run through long, deep tunnels, rural areas with poor coverage and signal-sapping woodland. Overhead line equipment is also thought to have an impact on the quality of signal.

Speaking in June to RAIL, Eurostar admitted that there were ‘concerns’ regarding mobile network coverage on a large part of its route. It’s somewhat puzzling that you can use the internet all the way through the Channel Tunnel, 100 metres below sea level, but have the frustration of patchy coverage when racing through Kent or Northern France.

There are plans for investment to counter this problem, but for the time being, coverage remains intermittent at best. To improve this will require more aerials, which would involve making deals with the mobile phone companies.

But there is always room for innovation. Nomad Digital has worked with GoMedia to develop an entertainment app which allows users to enjoy media stored locally on Eurostar trains, offering passengers an alternative to browsing the internet - a bit like an on-train video library.

The shows available are from both the UK and France (with subtitles) with the addition of Belgian and Dutch content in the works. The developers monitor what is being watched so they can keep in step with what people watch and change the content accordingly. GoMedia Chief Executive Matt Seaman explains that, on average, a passenger uses the app for 75 minutes. They can also use the app to check on their journey’s progress - one of its most popular features.

GoMedia began working on the system in April 2015. Eurostar wanted a premium offering that would lure more people away from airlines and onto the trains. Seaman has been involved in similar developments before, such as for Sky and Freeview projects. He highlights that one of the most-watched shows on Eurostar trains was Peppa Pig.

Nomad Digital General Manager Jean-Philippe Tissot, travelling on the train to Paris on October 14, said that one key factor is to keep the contents fresh. “It keeps passengers coming back,” he says, and makes the point that it also drives down mobile data costs; a trainload of passengers streaming content via the trains’ WiFi access points is expensive for TOCs, who have to pay for that data, just as you would through your personal phone contract. As far as the actual coverage is concerned, however, that’s up to the likes of Vodaphone, EE and O2.

Seaman believes that in time “several hundred” passengers will be able to use the app concurrently, all watching locally stored content. That will need further development, which Tissot says Nomad is already working on. “We are monitoring its use at the moment. We need to see how many people are accessing it.” At the moment, one issue that skews those figures is a passenger who might be using the app on multiple devices simultaneously, which the system sees as multiple users. But the system has to be able to cope with high demand - if all 900 people on an e320 train were connected to the service, could it cope?

WiFi access points are fitted throughout the train, and Tissot explains that each one can handle between 80 and 90 connections.

Seaman reveals that current figures suggest that there are between 200 and 300 connections through the app per train. “That saves the company a considerable amount in 3G/4G data charges. These would be very high on a Eurostar service,” he explains. Virgin Trains - both East and West Coast - have recorded lower data costs as more passengers use the BEAM app to access the on-board entertainment.

Tissot also points out that the system is resilient enough to cope if the WiFi fails in one vehicle, so passengers in the rest of the train will not be cut off.

The system works through a WiFi access point within the carriage (two per carriage). The access points are hard-wired to a mobile network-enabled router, as is the media server that hosts the actual content, in digital format. The high-end routers on the e320s can be connected to the mobile network through up to eight simultaneous 3G/4G connections, to both UK and French networks.