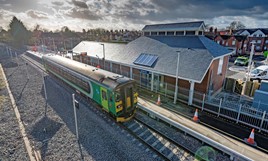 Local rail campaigner FRASER PITHIE has been among the many supporters of the scheme to reopen Kenilworth station, but has been frustrated by a succession of postponements and lack of transparency about the reasons why. He offers his personal insight into the problems

As a result of an £11.3 million funding partnership struck between Warwickshire County Council (WCC), Coventry and Warwickshire Local Enterprise Partnership and the Department for Transport’s New Stations Fund in 2013, Kenilworth is now on the brink of having a station again. But as a long-time resident of the town, my view is of a story of woe and calamity that does not bode well for the future of similar local authority-sponsored rail enhancement schemes.

I think the best way to describe the Kenilworth station project is as a ‘dog’s breakfast’. After all, the station is more than 15 months late, 20% over its original budget, and considerable mistakes were made in its early construction.

I will now explain the reasons why…...

Three names have been shortlisted for the Tunnel Boring Machine