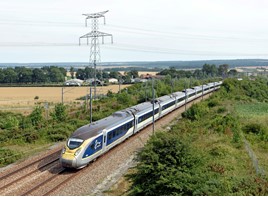 Described as “a knock-out entry” by the National Rail Awards panel of respected judges, Siemens’ Eurostar Class 374 e320 Velaro is the first winner of the NRA Train of the Year.

They were introduced in November 2015 on the St Pancras International-Paris Gare Du Nord route, and expanded their operations to Brussels in May (RAIL 828).

Siemens Contract Manager Nigel Broughton tells RAIL that while the Velaro may not be the most complicated train in the manufacturer’s portfolio, there were many hurdles that had to be overcome. He describes it as “a significant project with high requirements and specifications”.

The initial order was for ten trains (each formed of two half-sets). This was then increased by a further seven trains in November 2014, at the launch of the ‘374s’. Each unit is formed of two eight-car sets. Unlike the Class 373s they displaced, the lead vehicle carries passengers and is not a power car.

They are capable of 320 kph (200mph), and are 400 metres long. They weigh 970 tonnes and feature distributed power with 32 asynchronous traction motors on 16 bogies, with a maximum 16Mwatt power consumption (21,456hp) when running on 25kV mode. Siemens describes them as representing a “major advance in international high-speed rail”.

The company believes that the Eurostar e320 sets new standards for international rail travel, offering a range of benefits to passengers, including:

They were tested ahead of authorisation to operate to meet Europe-wide TSI requirements. Unit 1 (374001/002) was the first to be used in Belgium. Siemens says the complex approval process was “carefully managed, with effective stakeholder management an important element of the programme”.

EPSF (the French National Safety Authority, equivalent to the UK’s Office of Rail and Road) approval was gained first, followed by the UK, Channel Tunnel and then Belgium. Close co-operation between stakeholders was also clearly evident - for example, Network Rail’s high-speed team worked closely with experts from SNCF to gain clear understanding of system validation and risk management.

First to be delivered to the UK was unit 4 (374007/008) in January 2014. It was used for depot modification verification and site acceptance.

More than 60 training modules were developed to train staff over a two-year period, with more than 180 drivers, 140 train managers and almost 1,000 catering staff now trained on the sets.

The e320s now dominate cross-channel services, with the older Class 373s operating longer-distance trains to the south of France and the Alps, as well as some Paris trains. All but eight will be withdrawn as a direct result of the Velaro order.

Siemens says that developing, building and bringing the Velaros into traffic has been “uniquely complex, not least due to its international nature”.

An e320 must operate with the traction, braking and signalling systems for each country it passes through. As a result, the e320 has seven Automatic Train Protection (ATP) variants on it (ETCS, TVM, KVB, RPS, TBL, MEMOR and ATB), supplied by three companies (Ansaldo, Alstom and Faiveley), as well as three different power supplies so that it can operate on UK, French, Belgian and Dutch railways. The ‘374’ is able to switch between power at speeds often in excess of 160kph.

Built to European rather than standard gauge, the Velaro has 20% more capacity than the trains it is replacing, with 900 seats in the new trains against 750 in the ‘373s’.

Entries for RAIL’s National Rail Awards had to be submitted by the end of March, and Siemens highlights that in that month alone there were 718 journeys completed by the e320s, covering 219,503 miles. Since the start of service there had been 8,735 journeys completed, with a total of 2,670,417 miles covered.

As this issue of RAIL went to press, 14 of the 17 sets had been accepted for traffic, while the 15th had arrived in the UK ahead of its acceptance process. The last two are due to be in traffic before the end of March 2018.

All the trains have been built, with 374033/034 leaving Krefeld at the end of August for Siemens’ test centre at Wildenrath, where 374013/014 is currently undergoing tests. This is actually Unit 7 in the build process, but was used for testing in the Netherlands and validation ahead of Eurostar’s new service to Amsterdam. That is now complete - Broughton explains that the train needs its systems upgraded to enable it to enter passenger traffic.

As RAIL went to press in early-December 2017, the ‘374s’ were not quite approved for Dutch operation, but this is expected during December. There needs to be approval from four countries, plus the Channel Tunnel. So far, the French and English have approved it, with CT approval due early in the month. That will be followed almost immediately by Belgium and then the Netherlands.

Daily, weekly and monthly reviews are carried out to discuss issues, and monitor trends and failures that may occur. Four specific improvement groups have been formed to focus on reliability, defects, maintenance and operation - this feeds the continuous monitoring, measurement and improvement cycle.

Says Broughton: “We want continuous improvement. We have programmes for that. We look at how we can manage diagnostic data better, how we apply that for maintenance and specific details and management.”

The Class 374s have changed the cross-channel travel experience through their airy new interiors, greater capacity and reliability. The complex way in which they needed approval was handled diligently by all relevant stakeholders, resulting in the introduction of an innovative, award-winning new train.

The Class 374s were originally hauled to the UK from Germany following testing, but now run under their own power from Belgium direct to Eurostar’s train care depot at Temple Mills.

Siemens says this enables minimal preparation for final acceptance runs between London, Paris and Brussels, before they enter traffic.

Once in traffic, their performance is improving. An agreed performance regime was put in place, and in the first six months there were 50% of the allowed reported failures within the specifications. This dropped to 25% of the anticipated failures in 2017. There have also been many instances of zero failures per measuring period.

Siemens was awarded a 15-year deal to provide operational and maintenance support for the Class 374s, and is two years into this.

The trains are maintained from Temple Mills depot, north London. This had to be adapted for the trains, as they are larger than the Class 373s, but it remains a Eurostar facility.

The trains undergo an I Exam (basically a check-up) before an M Exam every 25,000 miles. Due to the long distances that the trains cover and the nature of their operations, Siemens is already planning a light overhaul programme that will begin next year, largely focused on the bogies.

Siemens Contract Manager Nigel Broughton tells RAIL: “We rack the miles up quickly. After two years, on average, each unit has completed 800,000 miles.”

The judges all felt that this is a knockout entry when set against the criteria, involving an extremely high degree of management, technical and regular co-operation with Eurotunnel and European mainland infrastructure providers.

The project brings a new level of passenger amenity and comfort to the rail network, so reviving the fortunes of international passenger travel from Britain.

With delays to the Great Western electrification scheme, Great Western Railway was in danger of not being able to deliver performance in accordance with the revised franchise Direct Award.

The operator came up with a plan that the NRA judges said “sends a strong signal that even if one part of the industry does not perform, the industry can and should mitigate in a way designed to maximise benefits to passengers”.

The plan involved switching all Intercity Express Programme electric multiple units to bi-mode trains and ordering more AT300s. This meant an interchangeable fleet was possible, as well as allowing some areas to retain their direct services to London.

GWR ordered new Electrostar Class 387s to offset the non-delivery of Class 700s that had been due to be cascaded from Govia Thameslink Railway.

There are still plans for trains to be cascaded, and so GWR plans to create short-formed High Speed Train services and rework Class 158 duties to ensure buses are not required.