Into the depths of Glasgow Central… 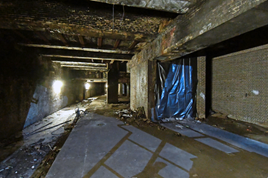 Glasgow Central has always been one of my favourite stations. So, when RAIL asked me to go on one of the tours that take you ‘behind the scenes’ into areas the public don’t normally have access to, I jumped at the chance. I thought that by doing so I might learn a little about the history of the building. Instead I learned far, far more.

The station opened on August 1 1879 with eight platforms, but had to be expanded in 1890 as it had already become too small.

The station was rebuilt to the impressive size it is today between 1901 and 1905, and now occupies 2.2 square miles of the city centre. The station is protected by a huge ridge and furrow roof, with over 44,000 individual panes of glass sheltering its 106,000 daily passengers from the vagaries of the Scottish climate. It boasts some fine architecture, shops, bars and a sumptuous hotel.

The tours have been running - with little publicity - since October 2014. They are the brainchild of Paul Lyons, who worked as a customer services assistant at the station. He’d been convinced for some time that there was a market for them, but it was only after a 2013 ‘open doors day’ (where normally closed buildings admit the public) that it became clear just how popular they could be. Lyons advertised 100 free tickets for a station tour and received 83,500 applications! Now, a little over two years later, 29,000 people have taken the £13-a-ticket, 90-minute tour, and it has become a full-time job for Lyons and his assistant Vic, who also manages the website and bookings.

You first encounter Lyons by the information point on the concourse, where people are asked to rendezvous. After you sign in, receive a Network Rail bump cap and hi-vis tabard, Lyons introduces himself and the entertainment begins. He is - to put it mildly - a bit of a tour de force. Tall, wiry and bespectacled, with a bushy beard and mellifluous Scottish voice, Lyons looks like he could have stepped straight out of one of the history books that he loves so much.

But this is no dry history lesson. Lyons’ passion, wit and storytelling ability makes the history leap off the page and surround you in such a vivid way that you feel part of it. He starts by telling us that where we were standing would once have been tracks, which were cut back to today’s buffer stops to create space for the increase in passenger numbers. He relates details of the roof, buildings and general layout, before leading us through a door by Platform 9, down a metal staircase and into the depths of the station.

Oh, did I mention the rats? Lyons does… several times. He gets the measure of the group in a series of jokes about the rodents that live below.

But it’s not all joking, as we find out when we stop in an area of brick arches. Nowadays it’s full of vehicles, but Lyons points out that coal and grain used to be deposited here through chutes between the tracks above. However, rats came up from the Clyde and contaminated the grain, leading to deaths among the folks eating it. The Victorians may have been great engineers, but their concept of hygiene left a lot to be desired! Apparently, coal for the boiler that heated the station’s Central Hotel was still delivered this way until the mid-1960s.

Moving on, we are shown several murals that Lyons has commissioned to illustrate the history of the station, including how the Caledonian Railway pinched the Scottish coat of arms for its own, and the long, drawn-out legal wrangle that ensued. We also hear details about what stood on the land before the station was built - a densely-populated village called Grahamstown. The Victorians did a thorough job of demolishing it, although Lyons has found a few patches of street cobbles that survive. Even so, local stories persist of a ‘forgotten village’ that lies intact beneath the station.

Before we disappear down a narrow corridor Lyons warns us of the smells we’re likely to encounter as we get nearer to the Clyde, after which we’re led into a tiny, brick-arched room which used to be a store for the old BR personnel files. I can’t imagine anyone ever being keen to visit the place, but I won’t spoil the story we were told by relating it all. Suffice to say, it involves rats… and big ones to boot!

The next place we visit is certainly the most poignant, not because of the building itself, more the events that had taken place there. Under massive steel beams and against a backdrop of two huge murals, we are first told about the history of the 14,000 men who built the station and of the people who worked there afterwards - many were refugees from the Highland Clearances who spoke Gaelic (as opposed to the Glaswegians, who spoke English). It seems they were looked upon and treated in the same way as some people still do immigrants today.

As many on the tour do not appreciate the impact that the Clearances had on Scotland, Lyons soon furnishes them with the horrifying figures. The Irish potato famine also gets a mention, as that too led to an influx of people to Glasgow.

Then Lyons relates the (frankly) shocking story of the events of 1916, when the area was used to store the bodies of dead soldiers who’d been brought back from France on troop trains.

Like many others, I never realised that soldiers’ bodies used to be repatriated – that is, until the industrial scale of the slaughter meant that the Government deemed it too expensive, so instead established the practice of burying them in vast cemeteries in the places they fell.

Nor did I know that once the bodies were brought back it was up to the families to claim them. They even had to identify loved ones themselves because the British army didn’t use metal ‘dog tags’ - only cloth ones, or leather for officers.

What sights these people must have seen, as they moved from stretcher to stretcher, is unimaginable. Then, to add further distress, relatives had to remove the bodies of their loved ones themselves. Women often used to have to pay someone to carry home the body of their son, father or husband.