INSIDE NEWTON AYCLIFFE: The future that Hitachi built 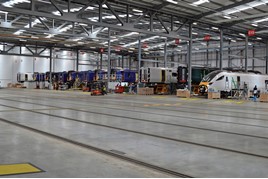 Taking 665 days from the start of construction to opening, it is located on an industrial estate near Darlington. It is home to more than 1,100 staff, selected from around 36,000 applications, and is currently engaged in assembling trains for five different operators. It could yet be the home for the construction of 60-plus trains for HS2, and also helping with the UK’s skills shortage by training engineers and promoting apprenticeships.

When it first opened in September 2015 by then-Prime Minister David Cameron, the plan was for 700 staff. HRE has since won further deals, and so has recruited more staff.

The focus on recruiting from the local area has provided a much-needed boost for a region where employment figures were in decline. The Japanese firm was attracted by the history of the area, and recognised its potential. Many HRE staff at the site had previously worked in the steel industry or the military, and spokesman Nina Harding tells RAIL that some 99% were local. The longest commute for an employee, she suggests, is about an hour.

The company currently has four third year apprentices, 47 manufacturing apprentices and four second year apprentices; it is very much invested in the future. HRE is also keen to promote diversity in its workforce. Harding explains there was a deliberate plan to recruit more women - one event attracted 120 women who wanted to find out more about the work available. Of those 120, 118 applied for positions and 15 were employed.

Out in the factory floor, vehicles include Class 800s for Great Western Railway and Class 385s for ScotRail in various stages of construction. Staff are allocated to specific tasks at specific stages. Some move with each vehicle as it passes through the various construction stages, but most stay with their specific tasks.

Andrew Crowe used to build motorhomes, but has been with HRE since August 3 2015, before Newton Aycliffe officially opened. He says the future prospects for the company encouraged him to apply for the role. He’s busy inside a Class 800/3 where a kitchen is being fitted, using skills learned in his previous job. Crowe says his team has improved productivity already, with five-car Intercity Express Programme (IEP) sets completed in six days rather than ten. His son also works at the site as an apprentice in Section 2, where wiring work is carried out.

On board what will become 385114, Chris Daniels is busy working on the interior fittings. He says: “It was a new thing and I’d heard good reports from people who worked there. Hitachi wanted specific skills - they told me to leave the toolbox at home and come and learn something new. I’ve had similar roles before, but with Hitachi I’ve learned to do a lot of things I’d never done before. Building trains requires a unique set of skills.”

Alongside Daniels is Chris Perkins. He worked at Nissan in Sunderland for 14 years, but says he’s enjoyed working for HRE much more. “It doesn’t feel like work, and that makes it easy to get out of bed in the morning.” He says he travels 26 miles to get to work and car shares (a practice encouraged by HRE).

Elsewhere on the floor, inside another ‘385’ vehicle, three women are busy working. “We do the harnessing and wires,” says Vicky Grainger. “We don’t move with the vehicle, and have always worked on the ScotRail trains.” Grainger joined HRE because it was a challenge. She’s working alongside 17-year-old Bryony Stonehouse, a first-year apprentice from Middlesbrough College. She’s learning manufacturing and operations. “I chose to come here,” she says enthusiastically. “It was a big company and the trains seemed good. I’ll be applying for a job here in July 2018.”

On the ScotRail production floor, Tommy Griffiths and Philip Lloyd are in charge. They have seen how Hitachi has set up its Pistoia plant in Italy (RAIL 828) and have now set about designing a production line for the County Durham facility. Griffiths works on the ‘385’ intermediate vehicles, while Lloyd works across all coaches. Before HRE he worked in a steelworks in Teesside. He spent 12 years there, and six in the Royal Navy. He joined HRE in February 2016. “Working for HRE is a good opportunity,” he says. “It involves a lot of engineering, but there are plenty of skills learned in other professions that can be transferred to jobs here.”

In the test house, Paul Carr is in charge of ensuring all the trains assembled by HRE at Newton Aycliffe are fit to operate. He joined the Royal Air Force in 1999 and left in 2011. He says that “trains and planes are not that different” when it comes to his work. His job is to test the engineering and he calls it “massively hectic” but he loves it. One coach per day is tested, regardless of the type of train. He says a nine-car IEP takes two weeks, and that people from MTU, the firm that manufactures the engines, also work on site with him.

The trains enter the test shop where they are weighed. Such is the ferocious nature of the delivery schedule there are 88 staff employed in the test facility alone. Carr is clear about the objective. “Our goal is to speed up testing.” During RAIL’s visit, five IEPs were undergoing testing inside. How many are outside? “Many,” Carr chuckles. He explains that while most checks are done before the vehicles leave the facility, the final part of the test is when they are released for delivery - the first time they’ll travel at 100mph.

Back in the facility, Paul Johnston explains how he recently brought his father to the site. Harking back to the legacy of the region, Johnston Sr worked in Darlington North Road before its closure. “He loved it here. It was steam in his days, but he was amazed by how clean it was here. He wanted to stay!”
Johnston has been with HRE since March 2016. His role is Team Member, and he actually took a drop in pay to join the company from Fujitsu. He admits it was a gamble, but he was attracted by the growth opportunities. He works on the ScotRail assembly lines.

While Newton Aycliffe may be hogging the headlines for HRE, it has depots across the UK, and will, by the end of the decade, employ some 2,000 staff.

Such facilities include Doncaster Carr, which is currently being used to commission IEPs for Great Western Railway and, shortly, Virgin Trains East Coast. It will be the home for the VTEC fleet. Built on the site of the former steam shed (and, latterly, DB facility), the depot will employ 250 people. This is another facility where Hitachi has invested some serious money (£80m). By the middle of the year, 60 people had started work there, and that is set to increase when the next wave of recruitment gets under way.

HRE’s aim is to focus on recruiting local engineers with experience in mechanical and/or electrical work. Apprenticeships began in September. The company also wants to recruit from groups often underrepresented in rail, including women and young people. It’s something in which HRE Managing Director Karen Boswell is a passionate believer, and she’s been vocal in encouraging the industry’s determination to recruit a workforce that more closely reflects the general population. One way this is being achieved is through forging links with schools and local community groups.

Regarding Doncaster’s depot, General Manager for East Coast Maintenance George Elliott says: “Our newly built depot is a clean and modern environment which breaks all the stereotypes. We are offering people the opportunity to work on 21st-century trains using industry leading technology and tailored training.

“Doncaster is the perfect location for bringing new talent and skills into the rail industry. The local area has a strong legacy of technical and engineering jobs and our depot investment looks set to cement this reputation.”

Another new facility is HRE’s depot at Stoke Gifford, which plays a key role in the IEPs entering traffic with GWR. More than 150 staff have been recruited for the depot in a wide range of roles. HRE is keen to build upon the region’s engineering legacy, which it says includes transport achievements such as Concorde. Like Doncaster, it cost £80m and the plan is to create a long-term transport hub hosting a wide range of skills. Additionally, four apprentices per year will be recruited once the site is fully operational.

Gary Martin, Stoke Gifford Depot Manager, said: “This facility will soon become a source of great local pride, producing the new trains and servicing them to the highest standard.

“We are also investing in a new generation of rail workers. We want the widest range of talents and skills.”

Hitachi may, currently, be known for its assembly facility in the North East and the trains entering traffic, but in the longer term its dedication to developing the railway staff of tomorrow could well be its true UK legacy.