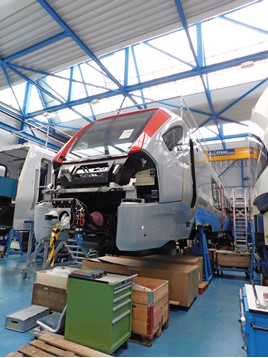 When the first Stadler-built electric multiple units (EMUs) start running between Norwich and London Liverpool Street next year, it will have been 61 years since the last new trains specifically ordered for Great Eastern Main Line (GEML) expresses entered traffic.

But those new EMUs are only part of what the Swiss manufacturer is delivering for Greater Anglia, as part of an historic deal that involves replacing the entire GA fleet with brand new trains.

The Class 40s introduced in April 1958 were designed to replace steam trains, but could not match the times, and so the ‘Britannias’ returned. Cascaded Class 47s were then introduced on the GEML from 1965, and the Type 4s remained on the route until 1987, when electrics took over following electrification of the line from Ipswich to Norwich (wires had reached the Suffolk town two years earlier). Ever since, it has been a tale of cascades and cast-offs in East Anglia.

The same is true for the region’s rural routes. Class 156s arrived in 1988 as part of the ‘Sprinterisation’ of the railway, but these were used as much on long-distance trains as they were on the branches, and so the Class 101 first-generation diesel multiple units continued to operate.

History then repeated itself, with the newer-build trains replaced by older stock (refurbished ‘101s’). Cascaded Class 150/2s and ‘153s’ were also used on the routes, and while 12 Class 170s were ordered and delivered to Anglia Railways, these were for new services.

The latter remain with GA, but not on the through trains to London for which they were planned. The rural fleet is also home to nine Class 156s that returned to Anglia in 2004-05.

Time for a change… and the future for the GA rural routes was unveiled in Erlen in Switzerland on May 3, when four-car bi-mode 755401 was displayed.

That’s 138 vehicles to replace 55. They will be used on the same routes as today, but with frequency improvements on branches. The Ipswich-Peterborough route will become hourly instead of every two hours, the hourly Norwich-Cambridge will be extended to Stansted Airport, the Marks Tey-Sudbury shuttle will be extended to Colchester Town, and a new Lowestoft-London Liverpool Street service will be introduced next summer.

“For the rural routes, these will have the biggest impact,” says GA’s Director of Franchising and Programmes Mike Kean.

“At the beginning it will be overkill, but these were the right mix. Our train planning team is desperate to get rid of the ‘153s’. We can then deal with events such as concerts and football.”

As for the ten 12-car EMUs for GEML, he says: “It gives Anglia a proper inter-city service.”

Kean explains to RAIL that it was a Department for Transport specification to introduce the through Lowestoft trains, and for that reason it was decided that BMUs would be the best option: “We did look at every option and asked lots of questions and answers.”

Stadler was formed in Zurich in 1942. Since 1987, when Peter Spuhler took over operational responsibility/ownership of Stadler-Fahrzeuge AG, the company has grown. Its first FLIRT unit was delivered to SBB in 2004, and its Polish operations were launched two years later, followed by its Hungarian facility in 2009. It has more than 7,000 vehicles sold to 41 countries.

Locomotives make up more than half of that figure, followed by more than 1,500 FLIRT vehicles. It is the FLIRT that GA has ordered - because it is an established product, according to GA Joint Project Manager Steve Mitchell, and because reliability is high.

For the UK FLIRTS, around 40%-50% of the bodyshells are manufactured in Hungary, while the 20 EMUs are constructed at Bussnang (around 30 miles northwest of Zurich).

In terms of the delivery schedule for the EMUs, Kean says that the first four deliveries will be airport sets, followed by all ten GEML sets, and then the last six airport sets.

“The main focus is to get the inter-city sets out,” he says. “We identified that the current DMUs are the biggest headache, and the most intensive for maintenance. And not all are PRM-compliant.”

At the factory itself, Stadler Bussnang CEO Georg Kapeller takes RAIL for a tour. He points out a big hole where a new office block is being built - a sign of growth: “We’ve about 1,770 employees. All disciplines under one roof.” He says the company has a lot of young staff, and that on average they stay for six or seven years.

Kapeller says 95% of the car bodies produced are aluminium, and that 90% of the welding seams are completed by robots (of which there are 19).

“We produce about 400 car bodies per year,” he says. “We work 5.5 days and two shifts. The assembly floor is one shift per day for five days.”

For the GA trains, there are four main components to piece together: the roof, bodysides, floor and bulkhead. Stadler produces the roof and underframe first. “Then we cut out openings in the sides for doors and windows,” adds Kapeller.

Stadler Technical Project Manager Martino Celeghini says of the GA trains: “The project is fantastic and challenging. The major challenge was the gauge, especially around the bogie - we need to shrink it for the UK. And these seats are adjusted for UK fire standards and safety. We are used to building a tailored design.”

Celeghini explains that the trains share many components. Other than the power pack, the BMU is basically an EMU, he says. The BMUs are more classic FLIRTs, while the 12-cars have slightly longer intermediate coaches. There are six pairs of coaches. “We needed to add couplers to absorb energy in the event of an accident,” he adds.

Silvio Gemperli, Stadler Commercial Project Manager, tells RAIL that the factories in Poland and Hungary are identical to Bussnang. He points to a bodyshell and says: “There are 20 bodyshells for EMUs here. Once they are put together, the bodies go to assembly and then commissioning.”

Gemperli discusses the power for the BMUs: “The power pack has four engines on a four-car, two on a three-car. On a three-car, the engines are diagonally opposite each other.

“There is an electric pack behind the cab. The FLIRT is an EMU with a power pack. If you want, you can remove the power pack. The train can also be extended because the electric traction is always in the driving vehicle, and the pantographs are on intermediate vehicles.”

Also touring the factory is Mitchell. He is one of a number of senior train operating company staff whose job has them travelling to locations such as this on a regular basis.

His passion for the product is clear in his voice. He has been manager of Norwich Crown Point depot in recent years, and led the programme to drastically improve the appalling reliability of the Class 90s in the mid-to late 2000s.

GA plans to introduce a new timetable making full use of the new trains’ capability. This includes three trains per hour between Norwich and London, with two using Stadler EMUs and the other using a Bombardier Class 720 Aventra EMU, although Mitchell points out that the timetable for next year has yet to be finalised.

“The dwell time goes up at some stations, with one door per vehicle at some locations. But that is not a problem at others like Ipswich, where it is already two minutes.”

Mitchell even highlights the performance on a rural branch: “The BMU for Sheringham is good, for example. The timings are good. The turnaround at the moment if we have a wheelchair board the train means we fail PPM, but that will change with the performance of the new trains.”

He acknowledges that the performance of the new fleet is a concern, but has a plan: “Out-of-box performance is a worry, but that is why mileage accumulation will continue.”

Greater Anglia, and the region, is looking forward to these new trains. As current Managing Director Jamie Burles told RAIL in 201x (RAIL 8xx) the region has sat and watched as fellow operators have received new trains.

After a successful campaign by stakeholders, it is Anglia’s turn for new kit. The key now is for it to deliver the required growth through improved performance.

The region is waiting.