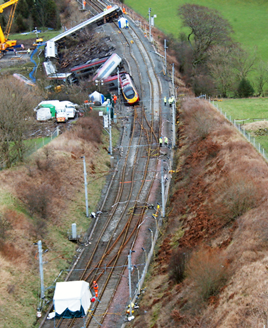 Statistical analysis is part of the RSSB’s stock-in-trade. Every year, we produce a safety performance report and present data on derailments, collisions, fires, fatalities and injuries to passengers, staff and members of the public. Each year since Grayrigg we’ve recorded zero passenger and workforce fatalities in train accidents.

This is important work: numbers are vital indicators and can help focus resource where it’s most needed. Some, however (at the RSSB and elsewhere in the industry), look beneath that impressive trend, and keep an eye on the daily incident reports and for anything that doesn’t look quite right. That’s because we live in an uncertain world. As safety expert James Reason wrote in 1997: “The large random component in accident causation means that ‘safe’ organisations can still have bad accidents, and ‘unsafe’ organisations can escape them for long periods. Bad luck can bring down the deserving, while good luck can protect the unworthy.”

‘Luck’ is a nasty little word for the safety practitioner, but it’s there all the same. And a glance at those reports will reveal how many near misses and irregular working events we’re having day in, day out. So we can say we’ve been ‘lucky’. But what can we say we’re doing about it?

The short answer is that - as both a listening and a learning organisation - the RSSB is doing quite a bit. Through our research programme, periodic safety reports, strategic risk papers, publications on incidents inside and outside the railway, the RED video series, Right Track magazine, and the analysis and support we provide, we help the industry to learn. Through our members (and more), we listen, record and share.

We also play a part in the accident investigation process by providing relevant training and guidance, by providing statistics to help RAIB set incidents into context, by offering expert knowledge from staff with extensive industry experience, and by bringing cross-industry groups together to tackle industry-wide issues.

Tieing much of this together is the Learning from Operational Experience annual report, which looks at some of the tools available to aid learning, and captures some of the lessons learned from Britain and around the world, while considering specific issues that can impact on rail operation and maintenance. The RSSB actively encourages those responsible for safety to use its findings, data and reports, but - through corporate learning and memory - to think and to ‘worry’ too.

That doesn’t mean learning is easy. How many times have you hit your thumb while hammering a nail and told yourself you’ll never do that again, only to put in a repeat performance the very next day? In a company, it’s even harder: companies comprise a number of different and disparate memories, which don’t always fit together perfectly, and which can change as staff retire, move on, or come in from elsewhere. When you expand the idea to a complex industry like rail, it becomes even more challenging.

One thing I’m always saying in my job is that ‘we combat complacency with continued vigilance’. In a fluid industry like ours, it’s the only way. The source material for the best learning opportunities often comes from the coal face, whether it’s part of routine incident logging, confidential reporting via CIRAS, the ‘Close Call’ system or simply having a management-level understanding of what’s actually happening ‘out there’. The key is to make sure we’re grasping this source material and briefing the learning back into the system.

The RSSB’s review of the recent Croydon tram accident reassured that a similar overspeed incident is unlikely to happen on the main line network, because of the way the system is set up and operates. Technology has taken us a long way away from that scenario, but we still need to combine the numbers with the accident investigations, with the local issues, near misses and a long corporate memory to help make sure the zero stays a zero.

You can’t guard against bad luck, but you can minimise the chances of suffering catastrophic consequences from it. In this respect RSSB helps, by bringing the industry together, by cutting the data in every direction, and by telling the stories written by lessons learned the hard way.

My grateful thanks to Professor Anson Jack of the University of Birmingham for his vital assistance in preparing this article.