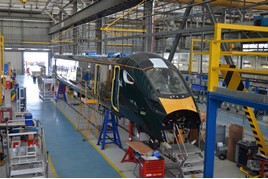 Hitachi Rail Italy is building 33 bi-mode Class 802s that will enter traffic in 2018. RICHARD CLINNICK visits the production line at the company’s Pistoia factory, to see how the construction work is progressing

The West of England has waited a long time for serious railway investment, but ‘all things come to he who waits’, and within the next 21 months a train fleet worth half a billion pounds will enter traffic in the region.

Hitachi Rail is building 36 Class 802 bi-mode trains that will replace the popular, but ageing, High Speed Trains. The new trains are part of Hitachi’s AT300 platform, and while fundamentally an Intercity Express Programme train there are key differences. They have larger fuel tanks than the Class 800s, a larger urea tank and larger brake resistors.

This enables them to operate longer-distance trains than the ‘800s’, so that they can run for longer distances away from the overhead line electrification which will end at Newbury.

The new trains will be formed of 22 five-car trains and 14 nine-car trains. They were ordered in two batches - the first in 2015 when FirstGroup was awarded a four-year deal to operate the Great Western franchise (RAIL 770), and the second last year when it became apparent that the Great Western Electrification Programme (GWEP) was behind schedule and that more trains would be needed to enable GWR to deliver its planned service improvements.

HST were introduced onto the Western Region in 1976. Fundamentally there is nothing wrong with them, but the last will be approaching 43 years old when they are withdrawn from long-distance trains from London Paddington to Penzance (a journey of almost 306 miles).

Another key factor is that were GWR to keep the HSTs, then it would need to invest heavily to make them compliant with disability requirements, for which the deadline is January 1 2020. This option was considered by GWR, but ruled out.

A source told RAIL that the cost of fitting plug doors to a Mk 3 is around £250,000. Combined with the various other modifications needed, such as fitting passenger information systems and grab rails, door sounders and various electronics to support the modifications, the cost of a new train is actually cheaper through its life-span.

The first three AT300s were on their way to the UK as this issue of RAIL went to press. These are pre-series trains and - as is usual with Hitachi - were built in Kasado (Japan) before being shipped to this country via Port of Southampton. They will move to the Japanese company’s depot at Doncaster Carr for commissioning, before being sent to Stoke Gifford to begin testing. The trains are two five-car sets (802001/002) and a nine-car train (802101).

The remaining 33 Class 802s are being built by Hitachi Rail Italy at its Pistoia factory in Tuscany. Time is of the essence, which is why this site was selected so that the order could be delivered quickly.

That’s because Newton Aycliffe, Hitachi Rail Europe’s main assembly facility in the UK, is full. Around 20 Class 800/0s are in production there for GWR, alongside ScotRail’s Class 385s that are being assembled. Production of the Virgin Trains East Coast Azumas will follow shortly, followed by the order for TransPennine Express and Hull Trains’ AT300s. Fitting in the GWR AT300 order at Newton Aycliffe was just not possible, especially with Hitachi also eyeing train order deals for the Deep Tube Upgrade and HS2.

Pistoia is home to 790 staff, of whom 90 are engineers. It’s not too far from the tourism hotspot of Pisa, and is connected to the national rail network. Acquired in 2015, when Hitachi bought AnsaldoBreda, the site is some 290,025m2, and is one of three facilities the company has in Italy. The two other sites are in Naples (where components are made), and Reggio Calabria (in the southern tip of the Italian mainland).

Hitachi builds a full range of vehicles, from very high speed trains through to Metros, and has subsidiaries around the world. And the company has been implementing a big digital transformation - for example, the use of robots in the construction of the AT300s.

Hitachi Rail Italy Chief Operating Officer Giuseppe Marino says that each ‘802’ takes 45 days to manufacture, with many components sourced from the UK such as fuel tanks, toilets and pantographs.

Hitachi Rail Europe Projects Director Berry Sas adds that because the ‘802s’ have the ‘IEP Delta’ design but with key differences, some additional testing was required.

The differences are a larger fuel tank (20% more capacity than a Class 800), larger brake resistors and a larger urea tank. These are required due to the distances the trains will cover, and because of the type of routes they will run over - such as the banks in Devon.

GWR Commercial Development Director Matthew Golton explains that they will be progressively put into traffic ready for the December 2018 timetable: “January to March 2019 will be a slow introduction. Following the Hendy review, electrification will be finished at the end of 2018, including to Newbury.”

Newbury is where the ‘802s’ will stop using overhead line electrification power, and turn to their diesel engines. The transition will be seamless.

Golton adds: “There will be a major timetable change in January 2019, and following that eight weeks of phasing out of the HSTs. The first week of March 2019 will be the last of the 2+8 HSTs.”

He is keen to point out the differences between the HSTs and the AT300s: “Each AT300 vehicle is 26 metres, and that makes an increase in capacity. We have made successive changes to the HSTs, but the new West of England trains offer up to 24% capacity increase.”

Golton says there will be a better, more efficient use of space, including luggage areas in the vestibules that resemble cupboards where bags can be stowed. With each vehicle being three metres longer than a Mk 3, that offers an extra 27 metres on a nine-car train - effectively a tenth coach in length. Catering also remains, with the nine-car Class 802/1s featuring a six-metre-long kitchen.

But why buy the new trains?

“There was a straight choice - refurbish the HSTs with disability access or order ‘802s’. We made the case to order a further seven. It is a speed change - it is about capacity and frequency changes. There will be calling point changes. Trains to Penzance will be up to 14 minutes faster.

“This is part of a much bigger picture. Looking at the Gross Value Added to the UK, the West Country is one of the higher contributors to the UK, and these train support that.”
Golton says that the trains will be maintained at Stoke Gifford and North Pole depots. However, work will also be carried out at Long Rock (Penzance), Laira (Plymouth) and Exeter, thereby safeguarding jobs after the HSTs leave.

Out on the Pistoia factory floor, Marino explains that testing is initially carried out at the site before the train leaves by rail for the UK. The site has 800 metres of 25kV electrified railway, and every single component on the train is tested before it leaves.

The test shed at the site is 200m long, and every ‘802’ will pass through it. The first one (802003) is due in there this September, with the first checks taking around two weeks. The fastest speed it will reach on the test track outside is 20kph (12.5mph), which is enough to get a feeling for if it works.

Inside the main building, trains from across Europe are being modified or constructed. The site is clean and tidy, and there is a sense of space. While the building itself dates from the 1960s, it feels modern.

In the welding area, there is the first glimpse of various Class 802 vehicles and components. There are three lines here, with one robot on each vehicle. Marino says that using the robots is a quicker assembly process: “It is like a human arm, and is able to go inside and out on the vehicle.”

Two engineers control it from a computer screen - one controls the laser guiding the robot, and the other controls the welding. Marino explains that the robot moves at 500 millimetres per minute.

Next is the assembly line. There are currently five lines, with one vehicle on each, but that will grow as production gets into full swing. On RAIL’s visit on May 23, T4 (802003) was here. This was the first GWR green Class 802 on the site, and will be the first to leave for the UK, arriving in December.

Hitachi staff beaver away on the various vehicles. Golton explains that the design of the Class 802’s interior has been driven by customer feedback.

There is one bay of four seats surrounding a table. Like most new trains, the seats are firm with a high back. Legroom is plentiful, but comments cannot really be made until the train is in traffic, operating on infrastructure that is not the newest.

The IEPs enter traffic with GWR this October, although passengers from London Paddington heading further west will have to wait a bit longer before they can benefit from the new trains. But after so much lack of recent investment, 12 months is not the longest time to wait. It’s taken time, but the 21st century railway is finally ready to reach the West of England.

Trains Configuration      Due into traffic