FROM THE ARCHIVES: Traction transition: HST to Azuma 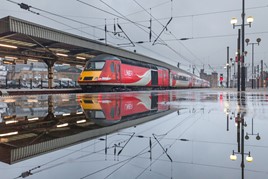 It’s a grey, damp November afternoon in Doncaster. The signal for the Up Fast through road turns green and a headlight appears in the distance, rapidly becoming brighter.

The sound of a hard-working diesel engine pierces the damp Yorkshire air. It gets louder, until a bright red High Speed Train cuts through the gloom.

Running at line-speed, well over 100mph, it hammers through Doncaster on its way south to London. A smattering of enthusiasts record its passing on their cameras and smartphones, while a few passengers stand and watch before turning back to their phones or magazines.

The signal turns. The HST has passed. The tail lights of the trailing power car quickly disappear from view round the bend towards Decoy Yard. All is quiet again.

It’s been an everyday sight on the East Coast Main Line since it started testing in 1977… but no longer. They may have been marketed as the ‘Journey shrinker’ upon their arrival on the route, but time has caught up with the ‘InterCity 125s’.

HSTs operating ECML expresses ended on December 15 2019. And apart from the four-day charity tour on December 18-21, the curtain has been drawn on 41 years of unbroken operation (regular timetabled services began in 1978).

Some power cars have plied their trade on the route for their entire careers, while others have been transferred in from elsewhere. And the length of the HST sets has grown - as did the number of companies operating them on the route (it peaked at three at any one time).

As it stands, those sets moving to East Midlands Railway will have an extra 12 months’ life, because they are needed to replace… HSTs. Those currently on the Midland Main Line do not meet accessibility requirements - and while the LNER ones don’t either, they are deemed more compliant thean their EMR classmates and thus have been given a stay of execution.

For the others, storage awaits. Some are already on Death Row. Two sets have already been identified for a one-way trip to Newport Docks and a date with the scrapman’s torch, with more to follow.

Owners of these iconic trains may be hunting for new opportunities and various organisations may be making noises about using them, but other than one set being acquired by the University of Birmingham for alternative-power testing, nothing has yet materialised.

Once the LNER fleet is withdrawn, for the first time in 42 years no HSTs will operate on the southern part of the ECML.

It follows their withdrawal on long-distance services on the Great Western Main Line in May (RAIL 880).

Thus King’s Cross will be an HST-free zone for the first time since Deltics dominated. The furthest south a Class 43 will continue to run will be York, which will remain served by CrossCountry HSTs.

For LNER Engineering Director John Doughty, the HST has dominated his working life for 15 years.

His 2019 has been about introducing four versions of new Hitachi Azuma trains, while removing the current incumbents from service. Fifteen nine-coach HSTs will have been withdrawn, as well as a large number of Class 91/Mk 4 sets. The final ‘91s’ will be withdrawn in June 2020, at which point Doughty will have only a fleet of Azumas.

But he will miss the HSTs: “I think they have been fantastic. OK, in the early days they had problems - I’m talking about when they were first introduced in the late 1970s. They had coolant leaks, but once that was understood they put in fantastic service.

“Do not forget, though, that they have been well invested in. The Valenta power units were struggling - the crankcases were beginning to crack and so they needed replacing.”

That latter work meant the end of the iconic scream from a Valenta power unit, synonymous with the trains from their introduction. These units were replaced with quieter MTU engines, which Doughty calls a “fantastic addition”.

“It is a testament to the design that they have done more than 40 years,” he says. “Clearly people see the value in the train and the passengers like them. But the time has come for them to be replaced.”

When the HSTs were introduced, the launch brochure from British Rail said the new trains would provide “a standard no other railway in the world will offer you”.

Although some locomotive-hauled trains remained, the HSTs dominated the ECML until the introduction of the electric Class 91s and Mk 4s from 1989. Some were then transferred to other routes, although the need to meet capacity demands meant more HSTs were added back into the ECML fleet during privatisation.

Now it’s their turn to be replaced. When Doughty spoke to RAIL on November 20, almost half of the 65-strong Azuma fleet had been accepted into traffic, with more to be rolled out. And from the end of November, Azumas began operating on the Aberdeen route, close behind their introduction on the Hull, Harrogate, Leeds and Edinburgh routes (all on which HSTs previously ran).

The Azumas form part of the Intercity Express Programme, designed to replace the HST while also improving capacity on major routes. Due into traffic in 2018, the first of the Hitachi trains began operating in May 2019 (RAIL 879).

Next came the five-car bi-modes in October, although not all have been delivered. These operate trains to Lincoln, Hull and Skipton (the first two of which were core HST routes).

And finally, nine-car EMUs have started entering service. It is the introduction of the latter, enabling the similar-length bi-modes to transfer to routes to the Highlands, that has sped up the planned withdrawal of the HSTs.

The decision to transfer the HSTs to the Midland Main Line was first raised by Government in April, when Abellio won the East Midlands franchise. But the decision was not confirmed until this autumn (RAIL 892). Did this affect LNER in any way?

“It didn’t change the way in which we maintained the HSTs,” replies Doughty. “As we speak there are two power cars undergoing an F-exam, which is the full specification of work. We had 15 sets, and nine will transfer, so what the Department for Transport commissioned us to do was to fit information screens to the sets that are transferring. Passengers will see the screens, but we are not using them.”

According to Doughty, the Azumas are “doing well overall”. He says that reliability is on a growth curve, having started off at a level similar to the GWR Intercity Express Trains.

The latter were introduced in October 2017 (RAIL 838). They have not been able to operate on electric power as much as planned, instead running on diesel where Network Rail had not finished electrifying the Great Western Main Line.

That’s not to say that the LNER trains are perfect, as Doughty acknowledges: “Clearly our operations team are uncovering stuff, and the Scottish Highlands in mid-winter will probably show some more challenges.”

However, LNER’s introduction of its 65 Hitachi trains was more relaxed than the GWR fleet.

“They were under huge pressure, as the HSTs they were using were going away to ScotRail,” explains Doughty.

Nevertheless, there have been other changes. LNER Managing Director David Horne used the launch of ‘800s’ on the Aberdeen route to confirm that the interiors would be modified.

He said: “We’re also pleased to be able to respond to customer feedback by increasing the space available for luggage onboard our longer-distance services, where customers typically travel with more luggage.”

This will be the first major change to the trains since their delivery, although Doughty says the seats on LNER have been changed by the fitting of different material to those on the GWR trains.

One change still to be completed is the modification of the inter-car connectors ordered by the Office of Rail and Road, which had resulted in the suspension in authorisation of Azumas last year (RAIL 863). This followed an incident in December 2017 when a man climbed similar cables on a Class 390 at Manchester Piccadilly and was electrocuted after coming into contact with the overhead wires.

This prompted the ORR to declare that the design on the Azumas (although identical to the GWR trains) would not be passed for use, in order to mitigate the risk of future incidents. LNER and Hitachi were given a year to devise a solution.

Doughty says: “There’s a design option for the inter-car connectors and it’s reasonably easy to install . We are meeting with the ORR and DfT to make sure it’s OK and meets the necessary requirements.”

He says the number of Azumas entering traffic will increase dramatically in January, when there will be a “surge”. That will then pause in February, to create a “buffer” in the number of sets available, ensuring that sufficient trains are available to operate the timetable.

“It means that if there are any delays, then there’s resilience. All you need is for a failure on the last day of planned fault-free running and it can affect the acceptance process.”

There has been a minor reprieve for one HST set for a couple of weeks, after a slow-speed collision involving 800109 and 43300 at Neville Hill (RAIL 892). The Azuma is expected to be out of traffic for several months.

The ‘43’ had been one of those due to transfer to EMR, although Doughty expects that while it will still be cascaded, that move will be purely for component recovery due to the severity of its damage.

Nevertheless, it has created a slight headache: “The HST set is for EMR and is the first to be modified with the fitting of Passenger Information Systems. The stock is OK.”

The accident has slowed down the rate of HSTs being removed, with more remaining in traffic until the final week.

“We will have to run a couple of diagrams with five-car instead of nine-car Azumas, and some Mk 4s will have to be used. These were at Ferme Park but were never off-lease,” says Doughty.

“It may appear seamless regarding the transition from old to new trains, but it’s taken a lot of work. When the depots transferred to Hitachi, we agreed a contract to maintain the existing fleets and set up contracts for the transition period.”

Earlier this year, Doughty told RAIL there was concern that the five-car Azumas may not enter service this year, which would have meant the HSTs staying into next year. But not now - the HSTs’ time has come and gone.