FROM THE ARCHIVES: The IEPs have arrived 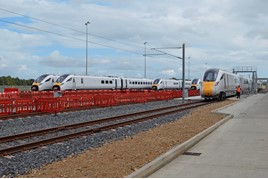 Eight and a half years after the order was placed, an Intercity Express Programme train carried its first fare-paying passengers on October 16.

Great Western Railway was the first to use the train, which has evolved from HST2, and which will spell the end of the beloved High Speed Trains on routes from London Paddington and London King’s Cross.

Launched in February 2009 (RAIL 610), the Super Express Train (as it was known then) was already controversial. Costs were thought to be high - it was financing that was thought to have held up the deal, which was eventually signed in 2012.

What was launched in February 2009 is not quite what is being delivered. The plans then discussed pre-series trains entering traffic on the East Coast Main Line (ECML) from November 2013, featuring ten trains in different configurations. From summer 2015 the trains would start serving Cambridge, and from summer 2016 they would begin work on the Great Western Main Line (GWML). There was also an option to run them from London Euston to Northampton from summer 2016. That clearly has not transpired. 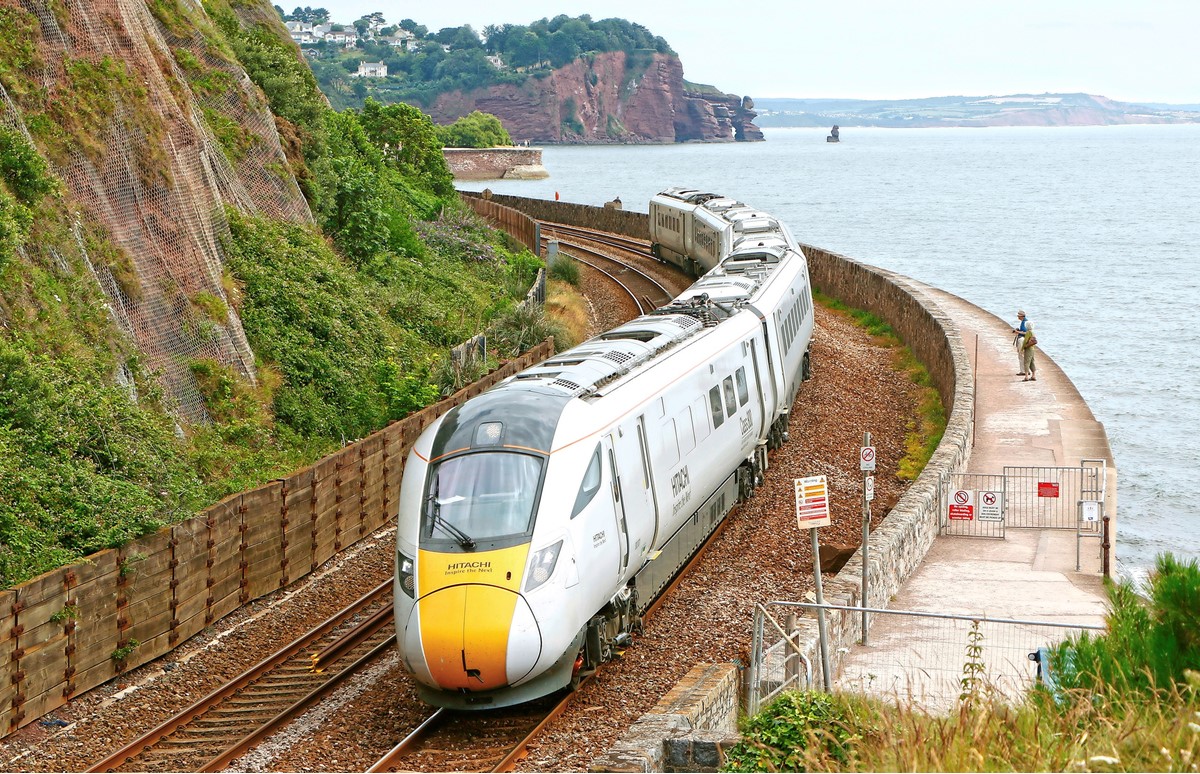 Initially, the trains were to be delivered in five-car and ten-car formations, but that is now five-car and nine-car sets. Even the design of the existing vehicles changed. RAIL 609 reported that they would be supplied in four basic vehicle types, with a diesel power car, electric power car (with seats), a motor car and an unpowered trailer car. The vehicles were to be 26 metres long.

Department for Transport specified and ordered the trains. Even then it was admitting that the bi-mode sets would be slower on its 2.4MW diesel power than the HSTs they were replacing, but that the better tractive effort would enable it to “get away more quickly”.

That has proven to be prophetic, bearing in mind the delays to the Great Western electrification. This means that until January, the only place IEP can run under electric power on the GWML will be between London and Maidenhead, before that is extended to Reading in January.

DfT said that from a standing start HST would pass an IEP eventually, but that would take quite some time. An HST accelerates at up to 0.33m/s2, while an IEP was planned to accelerate at 0.7m/s2. Journeys on sections such as Edinburgh to Inverness, which IEP will operate from 2019, will be slower. However, the overall journey will be quicker as the train will run on electric power south of the Scottish capital.

The trains were designed to be faster, cheaper, greener and more flexible than the HSTs they will replace (built 1976-84) and the Class 91/Mk 4 sets (1989-92). Then-Secretary of State for Transport Andrew Adonis said that journey times on the ECML would be slashed by 12 minutes, whereas now the plan is 22 minutes. On the GWML, he said it would take ten minutes off London to Bristol, although currently, with wires not erected, that is not the case.

At the time, DfT said that no operator would be forced to use the trains. It planned to give Agility Trains, which owns the fleet, a 20-year usage guarantee for the trains, and then treat any bids proposing to use different fleets as an extra cost (which meant that the different bid was less likely to win).

DfT expected that the initial plan would entail 560 vehicles for the ECML and up to 700 vehicles for the GWML. Additionally, 140 vehicles for the West Coast Main Line were discussed, but these never materialised. In the end, the ECML will have 497 vehicles comprising four different fleets, while there will be 369 vehicles for Great Western Railway made up of two fleets (supplemented by similar Class 802s that were ordered separately - a further 236 vehicles).

Agility Trains is paid by the operator using them, depending on how many trains are available for service, in a ‘power by the hour’ deal. This lasts for 27½ years. The company is not paid if trains are stood idle.

It was planned that the first 70 vehicles would be built by Hitachi in Japan, with the rest assembled here in the UK. Bodyshells would be manufactured in Japan and shipped to the UK for final assembly.

At the time of the deal being announced, the Japanese manufacturer had yet to confirm where that was, but three locations were being considered: Gateshead, Sheffield and Ashby-de-la-Zouch. In the end, Newton Aycliffe in County Durham was selected.

Back in 2009, the announcement was controversial, as it enabled Government to claim that 70% of the deal would be spent in Britain at a time when Labour was facing criticism for rising unemployment. Adonis said the deal would create 2,500 construction and engineering jobs, and secure another 10,000 indirectly. Hitachi’s Alistair Dormer, who was then the company’s European general manager, said that the new factory would employ 200-500 staff. In actuality, it is now more than 1,000 thanks to other orders.

The RMT union criticised the deal, demanding to know why it had not gone to Bombardier at Derby. Adonis countered that claim, saying that the number of British jobs secured was comparable to if Bombardier had been selected, and that with Hitachi winning, a second British manufacturing base would be created.

Bombardier was actually part of the Express Rail Alliance, which contained not only the Canadian firm but also Siemens, Angel Trains and Babcock & Brown. A third bidder, Alstom, had left the competition earlier (RAIL 586).

Even in 2009, electrification was a key topic for IEP. Today’s trains are not running under the wires where planned, while the 21 nine-car electric multiple units ordered for the GW route (801301-801321) have instead been built as bi-mode trains, to enable them to enter traffic on time. Furthermore, the wires they were supposed to run under are not ready, or (in the case of Cardiff-Swansea) will not now be erected. And there are huge doubts if those planned for Didcot-Oxford will also ever be erected.

At the time of the deal’s announcement in February 2009, ministers were still to decide on the exact mix of power cars, with decisions still to be made on electrification of lines from London to Bristol or to the East Midlands and South Yorkshire.

Just like Network Rail Chief Executive Mark Carne or Transport Secretary Chris Grayling today, Adonis discussed the benefits of flexibility created by the bi-mode trains, saying that they could be configured to fit any electrification programme, with more wires leading to fewer diesel vehicles (something that ended up being reversed).

Adonis also said: “A substantial part of the inter-city will not be electric.” It was also planned that ordering trains that could operate away from the wires meant that the seven-day railway was no longer an aspiration.

Not long after the formal announcement of the IEP deal, insiders were telling RAIL that the diesel-only variant of the IEP would be dropped, and that new trains vital to the Great Western electrification plans had yet to be determined.

IEP, we were told, made the case for the wires, but that would happen in 2015-20. Even then, we were told that overhead wires would never reach Penzance, although current Shadow Chancellor John McDonnell has different ideas (RAIL 837).

The plan then was for testing to be carried out on the ECML, so that problems could be ironed out ready for the Great Western to benefit. Instead, what has happened is that IEP has entered traffic with GWR some 14 months before VTEC.

The first IEP was unveiled to the British press in a small ceremony at Hitachi’s Kasado factory on November 13 2014 (RAIL 762). The five-car bi-mode made a short trip under its own power using its ‘donkey engine’.

It was then shipped to the UK for testing at Network Rail’s Rail Innovation and Development Centre (RIDC) at Old Dalby, before carrying out further testing in the Signal Protected Zone (SPZ) on the East Coast Main Line at Tallington, near Peterborough.

At the time, then-Hitachi Rail Europe Chief Executive Keith Jordan said that the bodyshells needed to be built in Japan, as they would be built using friction stir-welding techniques.

“Although the bodies will be built in Japan, we have done our utmost to ensure that we have sourced UK components wherever possible,” he added.

At the same event, Hitachi Chief Operating Officer Kentaro Masai said that because the firm was planning to build trains for the wider European market, it would transfer the technique to Newton Aycliffe. That has yet to happen, although the company’s Pistoia plant in Italy, bought from Ansaldo in 2015, is capable of using the technology.

Also at the event in Japan, it was confirmed that the ‘800s’ would be running on the GWML from 2017, subject to completion and commissioning of the overhead wires. That project, as we know now, has risen from £890 million to almost £3 billion, and the National Audit Office has warned that figure could rise yet further.

Cost was also a controversial topic surrounding IEP, with Jordan stating in Japan that the cost of the vehicles was “in a broad range between £2m and £3m per carriage.” Earlier in the same interview, with both RAIL Managing Editor and Events Director Nigel Harris and BBC transport correspondent Paul Clifton, he had been very defensive regarding the figures.

On March 12 2015, the first IEP touched UK soil when it was unloaded from the MV Tamerlane at Southampton Docks (RAIL 771).

Witnessed by Rail Minister Claire Perry, the five-car 800001 was immediately taken by road to Old Dalby for testing. Standing on the dockside, Perry said: “These trains will transform rail travel for passengers travelling between many of the great towns and cities of England, Scotland and Wales, provide a massive jobs boost for Britain, and deliver billions of pounds of benefits for our economy.”

At the same event it was confirmed that IEP would enter traffic on the GWML first, in December 2017.

“I will always remember being the rail minister that welcomes these trains to Britain,” added Perry. However, she was unimpressed with the Class 800/IEP names, suggesting to RAIL that the branding wasn’t “capturing the excitement” of rail travel, and that IEP or Class 800 “sounded like a pair of jeans”.

Just over a year later, on March 18 2016, a branding for the trains was revealed as Virgin Trains East Coast unveiled 800101 at London King’s Cross.

Welcomed by Virgin Group founder Sir Richard Branson, the nine-car bi-mode was unveiled as an Azuma (Japanese for ‘east’). Branson called them the UK’s most advanced long-distance trains, although there was no indication at that point when they would enter traffic, or on what routes.

That has since been confirmed as December 2018 (RAIL 837). And while VTEC has not confirmed which route, RAIL understands that the trains to Leeds will be the first to receive Azumas.

On June 30 2016, GWR 800004 carried its first passengers on the UK network (RAIL 805). Running as a test train operated by GB Railfreight, invited guests were taken from Reading to London Paddington, where then-Transport Secretary Patrick McLoughlin welcomed the set.

And then came October 16, when the first fare-paying passengers were carried by 800005/006 on the late-running 0600 Bristol Temple Meads-London Paddington.

The UK long-distance fleets are set to change dramatically. But it has been a long journey to reach this point.