FROM THE ARCHIVES: First Canadian Class 66 arrives in Britain! 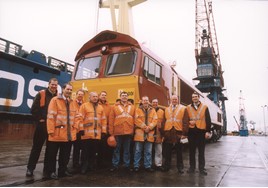 The pioneer locomotive of the 250-strong class was taken by rail to the nearby Immingham depot, fittingly hauled dead by Class 56 No. 56018, which itself arrived by sea at Harwich from Romania on January 22 1977.

After unloading from heavy lift vessel Fairload, operated by Jumbo Shipping, it was inspected to ensure it was fit to move and the brake system tested. Widespread rumours that the locomotive was dropped as it was loaded in the USA were proved to be untrue.

After No. 66001 was unloaded a delighted EWS Project Engineer Graham Preston told RAIL: “This is only the beginning - I’ll be even more happy when the rest have arrived. GM has made a cracking start with delivery well within the contract time and bang on schedule.

“Our best estimate was for the locomotive to leave the factory in early March and it actually was finished at the end of March. It’s the fastest that GM has ever delivered a new locomotive design.”

It was originally hoped that the locomotive would arrive a few weeks earlier, however the original plan, to use a fast seven-day crossing from Canada to Liverpool was scuppered when the price rose considerably.

Instead No. 66001 was towed to Albany, New Jersey where it was loaded. The ship previously visited Sutton Bridge, Lincolnshire, to unload machinery, before arriving at Immingham.

Deliveries of the production series, construction of which will start in earnest once EWS and Railtrack are satisfied with the prototype, will be made to Newport, South Wales.

A ship, which can carry up to eleven locomotives each journey, has been chartered for two years and will take around 10 days for the crossing from Halifax, Nova Scotia, Canada.

Once the Class has received Railtrack type approval and a safety case, (with completion of acceptance tests on No. 66001) there will not be a need for Railtrack to inspect each locomotive.

Locomotives will arrive tested and ready to run. EWS will check lubricants, coolant, brake systems and all systems. This will take three hours per locomotive after which they will go directly into traffic.

As production starts in May the first four production series (Nos. 66003-6) are expected in July, eight (Nos. 66007-14) in August and
11 (Nos. 66015-25) in September. Thereafter deliveries will be 11 locomotives a month. The other pre-production locomotive, No. 66002, which has yet to be painted, was due to move to the Association of American Railroads test track at Pueblo, Colorado in late May for a series of exhaustive tests. It will be delivered later this year once the work is complete.

During the weekend of April 18/19 No. 66001 was inspected over a pit at Immingham depot, and on Monday April 20 was displayed to the press at the depot, where it made its first movements under its own power in Britain. This took place within the depot confines, which is EWS, not Railtrack infrastructure.

One aspect of the Class 66 design is its radial steering bogies which slightly turn the leading axles on each bogie as the locomotive enters a curve. This results in no flange squeal, even on the sharpest curves and is expected to double the life of tyres.

No. 66001 was towed to Toton by 60016 on Monday evening, where a further, very detailed inspection was made. Early on Friday April 24 it was towed to Chester where it was exhibited for a visit by Deputy Prime Minister John Prescott, returning to Toton the same day.

It was moved on Monday April 27 to the Engineering Development Unit at Derby (former Research Department) for two weeks of static tests, to be followed by a week of loaded main line trials, probably over the Midland Main Line. After this it will enter service, and is expected to be based initially at Newport, South Wales.

Three EWS staff have been trained in Canada to drive the Class 66. Conversion courses for other crews are being developed, but it is expected that Class 59 drivers will require a one-day course, and Class 58/60 drivers will need a three day course. The Class 66 can work in multiple with
Class 59s and 67s (to be delivered in 1999).