FROM THE ARCHIVES: Cooling the Tube 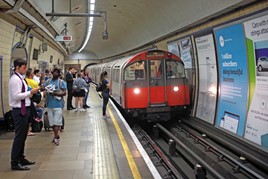 Worldwide there are a significant number of Metro networks that are grappling with overheating problems and the following findings will make all the difference. For London Underground, which originally advertised “IT IS COOLER BELOW” until the 1920s, this has been a 120-year problem and their Cooling the Tube Project has contributed little improvement since its inception in 2005.

Even in the temperate climate of the United Kingdom, from autumn 2017 to autumn 2018 there was a 40°C seasonal ambient temperature variation. In fact, a surface peak of 40°C+ was recorded last summer on the London Underground Central Line! However, the train and tunnel systems create broadly the same heat year round. In the summer, the seasonal effects add to this year-round heat. In the winter the seasonal effects are subtractive - so much so that to keep the passengers warm in winter saloon heaters are needed to generate additional heat.

There are essentially three types of network: underground only, predominately overground, and combined over/underground. They all behave differently.

For Metro networks that run only underground, such as Glasgow, overheating is not a problem - hold that thought.

For trains which run predominately overground, air conditioning (AC) expels the excess heat to free air, a technically sound but costly solution, both financially and environmentally.

However, in the summer, combined over/underground Metro networks overheat throughout. Saloon heat is not the only problem - it’s also the tunnel heat! However, AC in the trains alone is not an effective solution.

The current response to metros overheating underground is either to do nothing and subject the passengers to risk and discomfort or to install massive cooling plants in the tunnel network, which addresses the symptoms but not the root cause. Conventional wisdom, dictating the installation of these cooling plants - with their expensive capital and running costs and adverse environmental impact - is imprudent.

Why does AC on the train not work for combined over/underground Metro Networks?

First, because the elevated ambient air is pushed and dragged into the tunnel by each train movement and secondly, the sun’s irradiation heats the entire train both internally and, more importantly, externally! Even the undercarriage is affected when the sun’s rays strike the large mass of the wheels. Additionally, the rails and ballast are being irradiated and this heat is conducted, convected and radiated back to the undercarriage and the underside of the carriage itself, not to mention that with every metre travelled this effect is compounded. All this absorbed heat is emitted from the carriages, effectively making each train entering the tunnel into a series of giant ‘storage radiators’. Hence, AC in the train will not address all these heat sources, seemingly only the saloon temperature. However, the total effect of all these heat sources in the tunnel will overwhelm any attempt at cooling the saloon using AC.

The combined effect of the ambient air and direct/indirect solar irradiation is massive when compared to the train and tunnel system’s operational heat sources and causes the tunnels to overheat in the summer. The rise in tunnel heat is progressive with each train entering the tunnel throughout the day. Furthermore, attempting to cool by tunnel ventilation requires several air changes to achieve any benefit, so this is neither an effective nor feasible solution.

More research and monitoring should be undertaken to quantify the relative impacts of each heat source.

How can we be sure we’re
on the right track?

First, as mentioned earlier, because underground-only trains do not overheat! Secondly, because temperature monitoring has demonstrated considerably greater rises in saloon temperature when on the surface compared with the underground. Finally, because the sun causes rails to buckle, Tarmac roads to melt and metal seats and children’s slides to become hot enough to cause burns - so how can trains be immune from this phenomenon?

What is the answer?

We need to reduce the heat of the trains before they enter the tunnel and address the problem in an environmentally friendly and effective way. Consequently, this will reduce the need for additional tunnel cooling systems.

Obviously, improving comfort is a primary reason. But safety is also a reason. With considerable absorbed heat being carried into the tunnels and overheating them, even a short ‘stalled train event’ underground could seriously compromise passenger safety. These are the operational imperatives. However, we should not forget costs and the environment.

On that basis, we can and should address the cause and mitigate the problem, preventing the symptoms in the first place. This calls for a two-pronged approach: by introducing radiant and thermal barriers to the trains and by avoiding stabling trains in the sun during off-peak periods. These changes should be recognised as key requirements and should be incorporated at the design stage. However, these key requirements can also be implemented during routine repair, replacements and refurbishments.

It should be noted that while the above changes are not an operational imperative for predominantly overground trains, the environmental benefits to these trains should not be dismissed!

What are these barriers?

First, there is solar reflective paint which should be applied to all the metalwork exposed to the the sun’s rays - on the carriage and the undercarriage/wheels. Reflecting the sun’s rays away reduces both the heat absorbed by the train’s metalwork and that conducted inwards to the saloon. This would reduce both the internal and external train temperatures. The Australian Navy has applied this type of paint to its warships, and it has reduced surface temperatures by 15-20⁰C; the power load on the cooling systems has also been reduced.

Secondly, there is solar control glass. Standard glass allows 84% of the sun’s radiation to pass into the saloon and only reflects 16%, whereas solar control (Low E) glass allows only 4% of the sun’s radiation through the glass into the saloon but reflects a massive 96%. Moreover, by reflecting the radiation, less heat is absorbed by the glass itself, reducing its external temperature.

Thirdly, there is the undercarriage. Combined foiled/insulation products can reflect the radiation from the track and insulate against heat convected from the overheated bogies.

Finally, where trains are out of service during off-peak times, they should not be stabled in the open but shaded by a structure that does not in itself suffer from overheating by solar gain. There are two feasible options: fire-resistant fabric canopies or finned walls and roofs that operate like Venetian blinds with the openings facing north or east.

In conclusion, the Glasgow Subway demonstrates that all the heat sources from train and tunnel systems do not produce enough energy on an underground-only network to cause overheating!

Given that the principal cause of overheating of any train travelling overground in summer is quite simply the effect of the sun’s irradiation, obviously, all such trains would benefit environmentally from the suggested radiant and thermal barriers.

However, it is abundantly clear that the long-standing issue of underground tunnels overheating is also a direct consequence of this solar irradiation of the trains, so incorporating such radiant and thermal barriers on trains in combined over/underground systems is an easy decision, benefitting the travelling public from a safety and comfort perspective and, notably, providing significant cost and environmental benefits.

Finally, stabling of all trains travelling overground should be suitably shaded. This shading would also be advantageous to trains that only travel underground when in service but may be stabled overground during off-peak periods. However, such appropriate stabling would then obviate the need for underground-only trains to have radiant and thermal barriers.

About the author
Calvin Barrows is a chartered engineer, latterly retired.

During his earlier career, his work was focused on forensic engineering, to establish the mechanisms of structural and mechanical failures. Then, continuing as an engineering manager within the rail industry, he used his extensive, theoretical and practical knowledge of all construction disciplines, together with a holistic approach to creative problem-solving.

Outside his professional career, he brought the same skills and focused, hands-on approach to his architecturally unique, self-build home and outbuildings in rural Essex, incorporating many innovative amenities to make it both user and environmentally-friendly.

Together with his wife Sylvia, he also runs a small but successful property development and rental business, still making time to travel, visit the gym and go walking in the country.

Almost seven miles of the new West Midlands Metro extension from Dudley to Brierley Hill risks being postponed, or even cancelled.