FROM THE ARCHIVE: Class 385: an electric record-breaker 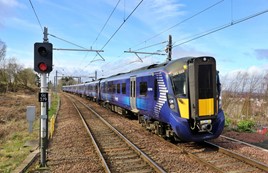 When the first Class 385 was unveiled in Glasgow Shields Road on a cold Sunday morning in December 2016, then-Scottish Transport Minister Humza Yousaf said: “We are on the cusp of a rail revolution, and the Class 385 is an important part of that.”

The plan was that in just 12 months, these new electric multiple units would be gliding between Edinburgh Waverley and Glasgow Queen Street, transforming the passenger experience on ScotRail’s flagship route.

Yousaf said the ‘385s’ would shorten journey times and provide improved capacity. He was right - they have done both of those things, as well as achieving record reliability figures for new trains of almost 90,000 miles per technical incident (MTIN). They regularly offer 97% availability per day, with manufacturer Hitachi aiming to make 66 trains from the 70-strong fleet able to be used each day, although this requirement drops at weekends.

Because of these successes, RAIL’s National Rail Awards judges awarded this year’s Fleet Excellence accolade to Hitachi Rail and ScotRail for the Class 385s, based on the maintenance figures while also highlighting their popularity with passengers.

But reaching that level of success hasn’t been easy…

This was the result of an £858 million investment in the Edinburgh-Glasgow Improvement Programme (EGIP) that was designed to reduce journey times, increase capacity, and offer a greener way of travelling by electrifying many of the routes that criss-cross the region.

Key to this was a subsequent £475m plan from ScotRail for its fleet, the headline act of which became the order for 70 EMUs that was won by Hitachi back in 2014. An option for a further ten sets was not exercised.

The fleet comprises 46 three-car Class 385/0s and 24 four-car Class 385/1s. Other than the number of vehicles per train, the main difference is that the longer EMUs have First Class accommodation whereas the shorter sets are entirely Standard Class.

The plan was for them to operate in up to eight-car formations, but on introduction this was restricted to seven-car trains due to the need to extend platforms at Glasgow Queen Street. That is now complete, and so eight-car sets run on trains to the rebuilt station from Edinburgh Waverley.

While the headlines were on these electrics replacing diesel multiple units (DMUs) on the flagship Edinburgh Waverley-Glasgow Queen Street route, and further reducing journey times between Scotland’s two major cities, they were also planned to improve services to the likes of Stirling, Alloa and Dunblane.

Introducing EMUs on these routes would allow ScotRail to internally cascade DMUs onto other non-electrified lines, enabling it to run longer trains, introduce new services and remove older fleets from service.

In January 2016, the first bodyshells were unveiled at Hitachi’s Kasado factory in Japan. Five months later and the first five bodyshells were delivered to the UK for assembly at Newton Aycliffe, County Durham.

Testing begin in late 2016, but through 2017 it was becoming apparent that EGIP was unlikely to be finished on time. These delays meant that testing and training with the new trains would be problematic, threatening the plan for a December 2017 introduction.

The two pre-series EMUs in Scotland in early 2017 were carrying out test runs from Shields Road to the Ayrshire coast, but not on the routes for which they were ordered.

During the summer of 2017, in his first few months as ScotRail Alliance Managing Director, Alex Hynes told RAIL that while electric trains were due to start running between Edinburgh and Glasgow that December, he would not guarantee it and that there was every chance it would be with Class 380s rather than the ‘385s’.

The delay was down to the timings and the infrastructure. EMUs were supposed to have begun running in December 2016, with the ‘385s’ following a year later. That didn’t happen. Hynes, at the time, hoped the wires would be energised in September 2017 followed by four weeks of proving the route.

Training was expected to then start in October, which he admitted would be “tight”, and so drivers began training on ‘380s’.

A major step forward came on October 18 2017, when 385001 ran under its own power between Edinburgh Waverley and Linlithgow (the first time one of the EMUs had run on their intended route). At that point SR, said the trains would enter traffic within the next few months, but it would be July 24 2018 before fare-paying passengers set foot on one of the EMUs.

A major flaw was subsequently discovered during testing, when ASLEF reported that the curved windscreen fitted to the trains was causing some drivers to see two signals.

“It’s like looking through a fishbowl all the time,” said Kevin Lindsay, the union’s organiser in Scotland (RAIL 850).

Hitachi, working with the unions, ScotRail and the rail regulator, eventually came up with a solution that was retrofitted to ten trains, while the rest were released from Kasado and Newton Aycliffe with the new design.

To cover for the unavailable new EMUs, SR leased ten stored former Govia Thameslink Railway Class 365s - a move that would be rewarded with victory in the Train of the Year category at the 2019 National Rail Awards (RAIL 888).

Branded ‘Happy Trains’, these gave ScotRail the time it needed to introduce the new EMUs.

And so to the present…

Hitachi delivered the final Class 385 into service last December, and so far the entire fleet has carried a combined 12 million passengers.

They have increased capacity by up to 44% on the Edinburgh-Glasgow route, compared with the DMUs they replaced, with as many as 101 extra seats per train available.

Their introduction has also allowed

ScotRail to shrink journey times to a mere 42 minutes, with the hope that it could yet be reduced to 39 minutes.

Passengers also appear to enjoy the new trains. Almost 90% have reported an improvement to their journey, often citing the interiors, quieter journeys, and environmental improvements.

Eighty-three per cent of those surveyed are satisfied with the travelling experience, while 77% have felt the benefits of faster and improved acceleration. More than half said their chances of getting a seat have improved.

But it is the maintenance results that really wowed the NRA judges. In period ten 2019-20 (see graph, opposite), the trains achieved a record 89,483 MTIN figure.

Hitachi credits this to its team of more than 300 staff in Scotland, as well as to its smart maintenance system. The trains have more than 15,000 sensors that ‘live monitor’ parts of the EMU - including brakes, traction equipment, and even the water level in the toilet.

And as the trains spend more time in traffic, Hitachi is identifying patterns across the fleet that enable engineering solutions to be created that further improve performance.

There is also the possibility that because of their modular design, the ‘385’ could be fitted with battery technology. This would enable them to run away from electrified lines, creating new routes for ScotRail.

From a tough beginning, the ‘385’ is now a record-breaking train leading the transformation of Scotland’s Railways. A National Rail Award accolade is very much deserved.

As the sun sets on the career of the Isle of Wight’s 1938 stock, the small but enthusiastic 25-strong team looking after the 82-year-old trains were recognised with a special mention by the National Rail Award Judges.

The team worked with the local community and councils to create an expanded role for railways on the island.

South Western Railway is replacing the Class 483s with Vivarail Class 484s (some 40 years younger than the ‘483s’). But it has kept up its focus on ensuring the veteran fleet keeps passengers moving.

Throughout 2018-19 and the first half of 2019-20, it was rare for more than 2% of the Island Line trains to be between zero and five minutes late, while fewer than 1% were cancelled.

But in the second half of 2019-2020, the ‘483s’ developed serious faults, causing a spike in delays and cancellations. Yet the team rallied to ensure at least one train was always available.

Looking after these trains has created other challenges. Due to their steel bodies, the trains are susceptible to sea salt, which means regular corrosion repairs are needed. Yet they cannot be easily moved to a major depot for this work, and so the team decided to focus certain people on tasks such as welding and carpentry, in order to keep trains running.

Although the Siemens Class 700 has previously won Train of the Year, that was just for that fleet. This time, Govia Thameslink Railway based its entry on four train classes from two manufacturers: Siemens ‘700s’ and ‘717s’; and Bombardier ‘377s’ and ‘387s’.

A complex cascade was required to meet the increasing number of services on Thameslink, while at the same time withdrawing 40-year-old Class 313s from the increasingly busy Moorgate route.

This phasing period required depot strategy changes, due to planning constraints and route strategy to enable the redevelopment of London Bridge station.

The National Rail Awards judges said: “This is a truly monumental exercise and is largely complete, although further service refinements will still be implemented -including Automatic Train Operation (ATO) over the central section when frequency is at 24 trains per hour, as required as per the original submission.”

The Class 385 is a high-performance train designed to meet a Transport Scotland performance specification for a 42-minute schedule between Glasgow Queen Street and Edinburgh Waverley, including intermediate stops.

There were difficulties with the fleet’s initial introduction (delayed EGIP electrification, windscreen design issues and door issues), which have now been overcome. The NRA entry is on the maintenance reliability of the fleet now at over 90,000 miles per incident. Passengers really like them.