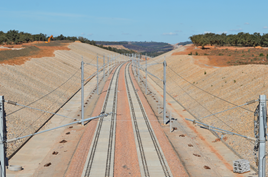 There are many similarities between High Speed 2, which was given Royal Assent in the UK on February 23 (RAIL 822), and the historic high-speed line being constructed in Morocco.

Both are deemed vital to the economies of their respective countries. And both will free up capacity on existing ‘classic’ lines, to enable more local journeys and long-distance freight to operate.

In the North African country, Colas Rail is using expertise gained from high-speed projects it has worked on across the globe to build the first long-distance high-speed line in Africa.

The $2 billion (£1.6bn) project has been in development for many years, with the Moroccan government expecting the railway to deliver wealth via improved business links. The railway will slash journey times from Tangier to the capital Rabat from around 4hrs to 47 minutes.

Much like in the UK, this is merely Phase 1 of a much larger project involving more high-speed lines. This means that the trains being built will operate on both the brand new infrastructure and the ‘classic’ network, until such time as the next phase is open. Eventually trains will serve other North African countries - the ambition is that, one day, the region’s HS network will link with Europe and the Middle East.

Morocco has been investing in transport infrastructure for many years. Roads often run parallel to an electrified railway, serving towns where new-build developments are springing up, attracting new businesses to the country.

A principal reason for the development of the country’s infrastructure is the inauguration of the port of Tanger-Med, one of the largest container hubs in the Mediterranean.

To ensure continued development of the national transportation system, Morocco decided to advance with a high-speed rail option - using proven technologies, albeit in an innovative way.

A new two-track system dedicated to high-speed trains is under construction. It is 185 kilometres (115 miles) long, and will have a maximum speed of 320 kilometres per hour (200mph). The line will run (initially) from Tangiers in the north to Kenitra, which forms part of an administrative region with the cities of Salé and the capital Rabat.

Work for the high-speed line includes building the railway, erecting the overhead line catenary and signalling, and installing the power and telecommunications system. Additionally, work is required to adapt and improve the classic railway at Tangier and Kenitra stations, which will act as the termini for the first phase of the country’s HS route.

Logistics centres have been built at Sidi El Yamani (which housed 800,000 tonnes of ballast during RAIL’s visit) and Kenitra (the larger of the two sites). These will link to the classic railway to enable the delivery of construction material.

Construction has been split into north and south sections, each with four contracts. The combined eight contracts are named TORAC (Earthwork, civil engineering structure and road reinstatement). Additionally, there are separate contracts for the viaducts.

Colas Rail is the main contractor for the project, delivering the railway, catenary and work bases (VCBT). The company’s Colas Rail Maroc is working with Egis Rail - the latter is responsible for project management, administration of testing and commissioning, while Colas Rail Maroc carries out the construction, commercial representation and project administration.

The relationship between Egis and Colas is strong in the UK, with both companies are working on the £1.2 billion Midland Metro Alliance.

Project Director Pierre-Gilles Douriez joined the project when it began in 2013. He tells RAIL that Morocco has been investing in its infrastructure “for years”, and that the high-speed line “is the final bit”.

He also confirms it is the first long-distance HS line on the continent, apart from one small section in South Africa. And although it may only be 115 miles long (the same distance as Norwich to London Liverpool Street), major differences in the geography present plenty of challenges. “The northern part is mainly hills, while the southern phase is flat,” he says.

Douriez explains that the contract includes delivery of the two work centres; construction of the railway and overhead line equipment (OLE), including the supply of all related equipment for OLE; managing the work bases and global logistics; management of the railway security and work trains along the new line; insurance of security for the line’s access during construction and commissioning; testing and commissioning of railway equipment; static and dynamic systems integration; managing the contracting authority to supply contracts for railway equipment; and designing and building three long-rail welded vehicles (324 metres long).

Sleepers are constructed in Kenitra, as is all the OLE for the railway. There are five main workshops at that site, and all the components are referenced by SNCF - the Moroccan authorities chose to use proven technology, and looked to France and its successful HS operations. Equipment is also supplied from other European countries, including Spain, the Czech Republic and Belgium.

From Kenitra, the engineering trains run along the already-built sections of the railway. The first one leaves at 0200, and by 0600 is on site 60km away. The maximum speed on the line is a slow 30kph.

In terms of operation, the standards are the same as the UK. There are three colours for the various work - green for daytime working, red for night-time working and blue for a long (distance-wise) worksite. Each site requires permission to access, with control at Kenitra. In total, there are 85 staff working on 25 trains per day on the line.

Douriez says that on the current railway system, journeys between Kenitra and Tangiers are lengthy: “It is one track on the classic line. It goes east then north. I have never met someone who does it in 3 hours 15 minutes, usually it is four hours.”

"Without additional funding from international government, there is a real risk to the survival" - Eurostar

Government engages with Eurostar on threat to operator’s future

"A failure to build the new line will lead to hundreds more heavy goods vehicles on to the M6 every day," - rail freight's plea to Boris Johnson