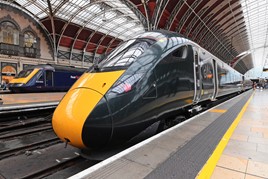 Great Western Railway’s Intercity Express Programme Class 800s entered traffic on October 16, in a launch marred by technical failures - air-conditioning poured water on unsuspecting passengers on the first run from Bristol Temple Meads, and there was a failure in the system that allows the train to switch from diesel to electric (RAIL 838).

For critics of the trains, and of the project that created them, this was a goldmine. And more than a month later, the trains are still attracting suspicion.

Yet this is despite their ability to achieve 125mph on diesel power (which was suggested would not be possible), reports of journeys between London Paddington and Reading in under 20 minutes (using both diesel and electric power), and a begrudging acceptance that perhaps the seats are not as hard as expected.

But the Class 800s have a tough act to follow. Much like when a much-heralded football manager moves on, the pressure is always on the successor. And the same is true in the railway world.

That’s because the ‘800s’ are being introduced by GWR to replace the iconic High Speed Train (HST). Certainly no ‘modern’ traction has been embraced by the public like the HST, yet we must remember that the oldest power cars and coaches are now 41 years old. They have been re-engined in the past decade, and extensively refurbished. The GWR interiors offer little resemblance to that introduced in the mid-1970s, when British Rail was fighting the growth of motorway traffic.

The Hitachi Rail Europe trains were formally ordered in 2012, deals having been announced in 2009. Their progression towards entering traffic has been well-documented, but in short, they were supposed to be operating as electric trains to Bristol and Cardiff for their introduction, and so far they have only run as electrics between London and Taplow.

From January 2, it is hoped they will run as electrics to Didcot. After that, details and information are sketchy - the only commitment has been Rail Minister Paul Maynard’s recent claim in a Commons Written Reply that electric trains will serve Cardiff by the end of Control Period 5 (March 31 2019).

From October 16 until November 10, GWR only ran the ‘800s’ on weekdays, with two pairs of five-car sets in traffic (four units). The pool of trains initially available was 800005/006/008/009, but that grew with the acceptance of 800010-013 by early November - in time for GWR to double the number of dutie). A further two pairs were introduced on November 13, with Weston-super-Mare and Taunton added to the destinations the trains serve. More entered traffic after the December 10 timetable change, and again after January 2.

But what of the trains themselves?

The train was formed of 800005 and 800006. Both are products of Newton Aycliffe in county Durham - the former was the first assembled at the site, and unveiled to the press on December 9 last year (RAIL 817).

The ‘800s’ tested were five-car sets, which together formed a ten-coach train. This is predominantly how the trains will work, although there are routes where they will split as GWR seeks to take full advantage of their flexibility. the company says no train will leave London in the peak shorter than a nine-car train.

On board, the first impressions are good. It is noticeable that First Class is not the same as Standard, and this is where we start the test. The rear coach of the formation, Driving Trailer Restaurant Buffet First Open (DTRBFO) 811005, is completely First Class with 36 seats (it also includes staff facilities and a preparation area). Pullman services will be provided from here, although the counter-style buffet (as per the HST has gone), with a trolley in First Class and Standard Class.

This vehicle also has a lower roof near the vestibule, as that is where the pantograph is housed. There is lighting around this. Beneath this roof is also where the disabled passenger accommodation is located. There are two spaces per train - both are in First Class, but they can also be used by Standard Class ticket holders.

Tables in First Class measure 25 inches across and 47 inches wide. There is complimentary WiFi, which was measuring 40MB strength as we departed two minutes late. The train is fitted with plugs, and it was noted how quickly this charged an iPhone 7.

The First Class seats are not leather (unlike the HSTs the ‘800s’ are replacing), due to fire regulations. They are firm, but not as firm as those fitted to a Class 387 or ‘700’. They measure 19 inches wide, 17 inches deep, and the seatback is 31 inches high. Armrests are 15 inches deep and 2 inches wide.

As the train departed, there was a low hum through the vehicle. Prior to departure, the noise reading on the decibel reader had been 63.4. There was no noise upon departure, and the indicator varied between 63.0 and 66.0 as we accelerated sharply. By Royal Oak, it indicated 64.6.

The ride quality as we reached line speed became lively, with my notes suggesting that the ride was “bouncing a bit”. This was not even when sat over the bogie.

Doors into the vehicle are single, rather than double as on a commuter train. They measure 27 inches wide and are controlled by buttons. Unlike many trains they are silent when opening.

One criticism levelled at the ‘800’ following its launch was that the sound of the pantograph dropping into its well as the train switched to diesel power at Taplow was audible. We made a point of listening for this, but it was negligible on 800005. For it to be noticeable, you would need to deliberately listen for it.

Walking through the train, the floor is raised in the three intermediate vehicles. This is where the diesel engines are housed on the trains, although there is no reduction in overall room.

The first all-Standard Class coach is Motor Standard Open (MSO) 813005, which has 96 seats, and here the extra three metres per vehicle becomes noticeable. IEP coaches are 26 metres compared with a 23-metre Mk 3. This allows for more capacity, and yet there is also more legroom per passenger.

The door into the vehicle is silent, but there are no signs regarding the controls. Indeed, signage is very poor throughout the train, something that has already been fed back to GWR by passengers.

Even regular travellers must learn these new trains, and until they do the unfamiliarity of what controls what will cause problems. A GWR HST has signage everywhere, and while that can sometimes feel cluttered, for passengers it can often be a Godsend.

There are eight tables per Standard Class coach, while all the airline seats have flip down tables. The latter measures 16.5 inches wide and 9.5 inches long. There is also an extension for laptop users, measuring an extra five inches.

Seats in Standard Class were another area where there were concerns. Even before the trains entered traffic, there was a belief that the Standard seats would be ‘hard’ and ‘small’, and not align with windows. (For the latter, GWR says there are more seats on its trains where passengers can see out of the window than on a Virgin Trains Azuma.)

As for the seat measurements, they are 17 inches deep, 18 inches wide and 32 inches high, yet due to the layout of the vehicle they do not feel high-backed. There is no sense of being crammed in, as perhaps there is on a GWR HST. The windows measure 27 inches in height.

Legroom from the edge of the cushion to the back of the seat is 13 inches in a Standard airline seat, and 15 inches in a priority seat.

Padding and the depth of the seat is another concern for many. The depth of the cushion around the shoulders is two inches, which drops to 1.25 inches in the back. The seat depth is 4.5 inches.

Noise in Standard Class is constant at 67.5 decibels, but actually drops to 58.5 as we climb over Reading viaduct. This varies dramatically from many underfloor-powered multiple units, which are often criticised for noisy interiors caused by the sound of the engine.

While there is a universal access toilet in the driving vehicle, in the MSO there are two near the vestibule opposite each other. Each toilet also has a baby-changing facility, and while there is a graphic to highlight this, there are no straps to hold the baby in position and nothing to distract the child. This is a disappointment, and also something that is lacking across many new fleets.

In MSO 813005, there are 92 seats, but the same number of tables remains, as do the leg measurements.

In Driving Trailer Standard Open (DTSO) 811005 there are 60 seats and only four tables. Also housed in this vehicle are the staff facilities.

Each coach has luggage racks located at the end of the saloon, while at the end of the vehicle there is a lockable compartment for stowing luggage and for cycles. Again, this did not appear to be well sign-posted.

Announcements on the train we used were manual, but each coach also has a screen above the door showing the calling pattern and next stop. However, without the digital announcements, this is not signposted. Had it not been for our knowledge of the route, we would have missed our Bristol Parkway stop where, due to platform extensions not yet being completed, the trains have to use Selective Door Operation (SDO). This needs remedying quickly, and is known to be one of the reasons for the delays the ‘800s’ are incurring in traffic.

The Great Western Railway Class 800 is a good train. It is quiet and comfortable, with better legroom for those travelling in Standard Class. Its acceleration on electric is borderline spectacular, while its diesel performance appears better than predicted.

There are problems, but these can be rectified. Signage needs addressing, as does the use of the digital passenger systems.

The reduction in quality for First Class passengers is interesting, and it will be worth revisiting this at the next Great Western franchise, likely in 2020. The gulf between First Class and Standard Class on a GWR HST is marked and worth the extra money, whereas on an IEP it is harder to justify the expenditure.

The feeling of space in Standard Class is excellent, helped by the bright interior. The lights react to the environment, and are not seemingly as bright as those fitted to a GWR HST.

Overall, the ‘800’ represents an improvement for Standard Class users, and a reduction in quality for First Class users.