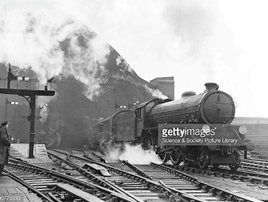 One of the best things about writing books is that you get to read books. Researching  The Sixties Railway, it was only natural that I’d revisit Gerry Fiennes’ classic I Tried to Run a Railway (1967).

As I read, I was reminded of the famous lesson that ‘when you reorganise, you bleed’. What I’d forgotten, however, was that this was not Fiennes in his own voice, but Fiennes recalling the training he’d received.

Its pertinence was sharpened by the changes he saw during the ‘Beeching revolution’, which mopped up management, led to the closure of some 6,000 route miles, and sped the abolition of steam. For Fiennes, it all got a bit too much, and if he hadn’t been sacked for the tone of his tome, he’d set his heart on retirement by 1971 anyway.

But, of course, the railways have always reorganised: when the Liverpool & Manchester was absorbed by the Grand Junction in 1845; when it too became part of the London & North Western the following year; when over 100 companies were ‘grouped’ from January 1 1923; and when the resulting ‘Big Four’ were nationalised from January 1 1948.

Once taken into public ownership, the system was divided into six regions (Eastern, London Midland, North Eastern, Scottish, Southern, and Western), above which sat an executive - one of five that answered to the British Transport Commission (BTC).

The latter had been established to provide “an efficient, adequate, economical and properly integrated system of public inland transport and port facilities within Great Britain for passengers and goods”.

The former were all about delivering that goal, making it work - which they did… for a while. Yet their methods would come under increasing scrutiny in the years ahead, their reorganisation (and reorganisation again) driven most often by governments seeking to stem what was usually referred to as “the drain on the public purse”. Such would prove to be their ultimate demise.

After nationalisation nothing much changed at first - old logos remained on old locos, and business carried on largely as before. But as operating costs increased and passengers began to prefer their Morris Minors and Austin A30s to the train, BR’s surplus started to become a deficit.

Unhappy with how the figures were falling (and with the BTC’s over-bureaucratic structure), Winston Churchill’s third administration of 1951 produced a Transport Act two years later that did away with the Railway Executive and allowed the Commission direct contact with the regions, which suddenly found themselves with new powers.

This reorganisation had an unintended consequence (as many do), in that it led to an unnecessary proliferation of diesel multiple units being designed, with orders being placed to local specifications (although onlookers often marvelled at the surface veneer, some named trains featuring a restoration of liveries that recalled the Big Four days of yore).

By the end of the decade, the Government was again unhappy with the figures, it being clear to most that the cost of the mid-50s Modernisation Plan was spiralling ‘out of control’.

In 1960, Prime Minister Harold Macmillan thus told the House of Commons that “the railway system must be remodelled to meet current needs, and the Modernisation Plan must be adapted to this new shape”.

In what might have seemed an odd marriage, Macmillan (a former director of the GWR) put his faith in Ernest Marples (a road-engineering contractor involved in motorway construction). To avoid any conflict of interest, the new Transport Minister divested himself of his shares in the Marples, Ridgeway company (to his wife, as it turned out). In the years ahead, he would be accused of impropriety and much more. Either way, he certainly shared the ‘pro-road’ stance of his colleagues and the country at large.

Marples lost little time in appointing a special committee - headed by the chairman of Tube Investments Sir Ivan Stedeford. Among other things, this committee felt that BTC thinking had focused too much on engineering matters. Its proposals therefore led to the cancellation of some electrification schemes (including the Coventry avoiding line), the reversal of the decision to build a flyover at Colwich, and the scrapping of centralised signalling on the Nuneaton-Crewe route.

The chairman of the BTC - by then General Sir Brian Robertson - criticised the cuts, commenting on the “chasm of difference” between his view of the railway as a public service and the Government’s idea of it as a mere transport competitor. But Robertson was due to retire at the end of May 1961, and the appointment of a Stedeford Committee member as his successor was a clear sign that Whitehall meant to follow a more commercial path...

As a director of ICI, the cigar-smoking Dr Richard Beeching had just the sort of sharp business brain that Marples sought, although such virtues came at a price. Part of the deal was that Beeching’s ICI salary would be matched - this brought him £24,000 a year, £14,000 more than Robertson and £10,000 more than the Prime Minister. However, for this he was expected to deliver a solution to a problem that had persisted since the 19th century - making the railways pay.

Beeching knew this issue could only be addressed after deep analysis of the figures. By the end of 1961, he’d mandated a thorough study to assess which traffic ran at a profit, which ran at a loss, which lines made money, and which existed only through subsidy.