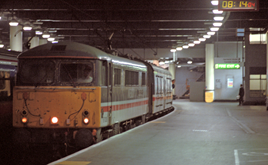 Every day I arrive at Paddington, and every day I alight from my HST before making a mad dash for the Hammersmith and City Line platforms.

Invariably, I miss the next service and look back across the station. Usually I’m lucky enough to see what the enthusiast in me thinks of as a ‘proper train’ - Great Western Railway’s ‘Night Riviera’, fresh up from Cornwall, its slumbering passengers now gone, the Class 57 at its country end preparing to drag the empty stock back to Old Oak Common.

Often I feel envious - I’ll have not long left my bed, so the thought of getting into another one has great appeal at this point. The spell breaks, of course - and I forget about the Sleeper as I’m jostled and breathed over in the mad crush of the Tube.

There is something more final about the end of a Sleeper train journey - the waking from slumber, the gathering of belongings, the downcast detraining. Appropriate then, perhaps, that British Rail’s last passenger working was one such service.

Born in 1948, when the first Great Western, LMS, LNER and Southern Regions were nationalised, BR bowed out for good in 1997. Sleeper trains go back much further, of course, to the 19th century - the first genuine sleeping car was introduced by the North British Railway in 1873 for runs between Glasgow and King’s Cross. This, and other early vehicles such as the first Pullman Sleepers imported from America, had communal sleeping and longitudinal berths, but by 1890 GWR had introduced the now-familiar ‘corridor and compartment’ configuration, which went on to be adopted by a number of companies.

The Sleepers survived the Grouping and saw in nationalisation, although the designs of Gresley, Stanier and Hawksworth (et al) were soon to be replaced by British Railways’ steel-bodied Mk 1 vehicles, which came in from 1957 and would go on to give over 20 years’ service. They proved popular with passengers, although their poor fire resistance was underscored all too clearly on July 6 1978, when linen bags placed against an unprotected electric heater caught fire near Taunton, resulting in the deaths of 12 people (RAIL 729).

At this time, BR was carrying some 800,000 Sleeper passengers a year. Although the official investigation recommended improvements to maintenance and operational procedures, most of the issues raised by the accident would actually be addressed by new Mk 3 vehicles, which were authorised in 1979 and which would feature better signage, refined fire alarm systems and smoke detectors. They were also air-conditioned, cleaner, airier and ‘better in every respect’ than their forebears.

Peter Kelly, writing for RAIL in July 1984 (at the time it was Rail Enthusiast), understood this. He knew that the Mk 1s were “were noisy, claustrophobic, sometimes faintly smelly”, but as he took the final Mk 1 Sleeper service (the 2340 from Inverness on May 14 1984), he knew that they were also “homely in a certain kind of way”.

Kelly’s fine account recalls how the Mk 1 ranks declined rapidly from 1978, although the truth was that the traffic was starting to ebb. They were part of the old railway, and as the world was changing, so too were passengers’ needs and expectations. Passenger numbers for the Sleeper market were falling away more markedly than for their daytime counterparts, which meant that by the time the Mk 3s were being delivered, their days were already numbered in many respects.

Back in the 1970s, it had been possible to (try to) snooze as you sped from Swansea to Paddington, Barrow to Euston or Aberdeen to King’s Cross. Almost 30 trains were timetabled to take you to almost every corner of the country in jostled comfort.

By the mid-1980s, there were just 13. And changes to shipping and increases in low-cost domestic flights from a number of regional airports would soon result in the end of the Holyhead and Stranraer services, while trains to and from ‘the Cross’ would be withdrawn in 1988 in a bid to cut the ‘competition’ between the East and West Coast routes.

As privatisation approached, there would essentially be just two in operation: the ‘Night Riviera’ between Paddington, the West Country and Cornwall; and the ‘Caledonian’ between Euston and Scotland.

It would be the latter that took centre stage on the last night of BR’s passenger operations in 1997, although when the time came there would be some confusion as to which train the Last Train would actually be.

Not that there was any confusion about the operator itself - ScotRail was BR’s last passenger sector, marking the end of what had initially seemed a slow process, Invitations to Tender’ for the first three franchises (South West Trains, Great Western and London Tilbury & Southend) having been issued back in May 1995.

By the end of March 1997, all the deals had been sealed and contracts had been signed… bar one. The media reported how “customers” and “excited enthusiasts” tried to work out which train could justifiably be considered the final one.

Some claimed perplexity was being promoted by “the bane of every traveller” - namely “BR’s infamous timetables”. More likely, it was just a question of logistics: which would leave first, or arrive last.

Some people didn’t bother to work it out, opting instead for a pair of free ScotRail expresses worked by Class 158s - one from Edinburgh to Glasgow, the other from Glasgow to Edinburgh. On March 31, both departed as BR trains at 2330. They would arrive as National Express ones at 0040 the following morning, their passengers clutching souvenir tickets commemorating the fact, some slightly sozzled on the free whisky that had flowed on board.

Welsby told the press that the company had “achieved a great deal over the years, and millions of current and former railway staff have much to be proud of”. In particular, he added: “They have a culture of continuous improvement in safety of operation in which the travelling public has great confidence.”

Railway staff had also seen a lot of change, with one man perhaps seeing more than most: 64-year-old John Bowden, the only rail employee to have started his working life before nationalisation, had joined the London and North Eastern Railway as a store boy in 1947, going on to work as a wagon examiner before ending his ‘BR career’ selling tickets at Blairhill, a station eight and a half miles out of Glasgow Queen Street.

“It didn’t make much difference when British Rail was nationalised,” he said as he received a plaque marking his achievement from ScotRail Managing Director John Ellis.

“I only hope privatisation won’t make much difference either. The biggest change since 1948 has been in the stations, which used to be filthy because of the steam trains. British Rail has been teased a lot over the years, but if you ask me it has been a pretty good service which people have appreciated.”

Privatised passenger railway could have cost £51 billion more to operate than if British Rail had remained in state hands, a new study suggests.

Twenty-five years ago, in April 1992, British Rail’s last Region gave way to sectorisation. GREG MORSE explains where the Regions came from and why they went