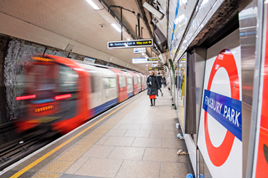 One of the joys of growing up in the 1970s was being able to see out of the cab of a British Rail diesel multiple unit. Their windows at the front of the passenger saloon allowed a full view of the cab and the road ahead - unless the driver liked his privacy and dropped the blinds.

To see such views today you need to travel on the Tyne and Wear Metro or on a preserved railway. When BR replaced its first generation DMUs with Pacers and Sprinters, the forward one went, never to return.

There is, however, one other railway that lets you look forward… Docklands Light Railway. DLR doesn’t have driving cabs because it doesn’t have drivers. DLR’s trains are automatic with a crewman provided to take control if needed. Which isn’t often.

Travel on London Underground’s Victoria, Central, Jubilee or Northern lines and you’ll be on an automatic train, albeit with a driver. Indeed, the Victoria Line has always been automatic.

What these four LU lines and DLR have in common is that they’re self-contained railways that operate only one type of train. But out on the national network, it’s a different matter. Expresses running at 125mph mix with 2,000-tonne freights. Some stop quickly, others take longer.

An automatic train also needs to know all this, except for signals because it will receive the information that signals convey electronically rather than visually.

Network Rail’s Digital Railway Chief Systems Engineer Andrew Simmonds explained the reasons for the interest in Automatic Train Operation (ATO). He told delegates that train and track reliability in Britain was improving, but with more trains running the delays each incident caused were increasing. “The slightest disruption and it gets fairly messy out there,” he said.

Against a backdrop of a rising population and house prices forcing people to live further from their work (particularly for London), it’s reasonable to assume that demand for rail will continue to increase.

For Simmonds, this presents four options. The railway could do nothing, and so rely on roads to take the increased traffic. It could deliver incremental rail capacity increases through less disruptive conventional enhancements (essentially do a little bit). It could deliver a system upgrade using digital command and control technology. Or it could implement very disruptive conventional enhancements (such as the long and expensive West Coast Route Modernisation). “At Digital Railway, we think the third option is worth looking at,” he commented.

London Underground has delivered system upgrades to its four automatic lines. The Victoria Line has new stock running under a new signalling system and the other lines have something similar, albeit retaining their already reasonably modern stock. The result was an increase in capacity of 20%-40%.

At the same time, DR is looking to develop train management (TM) systems that can better plan services and recovery from disruption. But it has not found this area easy, with delays to pilot projects at Romford, Cardiff and Three Bridges.

TM is the key to increasing capacity through Thameslink’s central core between St Pancras and Blackfriars. Trains will leave the core for a variety of destinations, much as water sprays from a hose. Feeding the spray into the hose at the other end of the core is much harder, and this is where TM can help by adjusting the position of trains so that they feed seamlessly into the central section at 24 trains every hour.

So far, so good. But as Simmonds told the conference: “If the driver doesn’t know what the train management system is thinking, there’s little improvement. So go for ATO and a link with train management.”

This needs a very reliable communications link, as well as accurate data about both trains and track. It needs the railway to measure punctuality to the second, which will demand a major cultural change.

Alstom ATO System Manager Benoit Bienfait gave the conference examples of how ATO increases capacity. Every driver drives differently - the differences might be small, but they must be allowed for in timetables.