After 15 years of stagnation… Wales expects 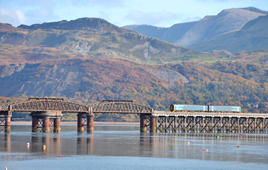 Even the best card player will be stymied if dealt a duff hand. Arriva, which in 2003 emerged as the winning bidder to run train services in Wales for a 15-year stint, has long insisted it had a ropey deal, thanks to the now-defunct Strategic Rail Authority (SRA).

It was SRA edicts that resulted in things being done on the cheap, claimed Arriva. New rolling stock? Forget it, said SRA, which was abolished two years later. Provision for increased passenger demand? Never factored in. Yet 18 million passenger journeys on the Welsh network in 2003 had become 29 million by 2013. Blame SRA for our operational shortcomings has long been Arriva’s mantra.

Everyone hopes for better when the next franchise is let. It’s all change since 2003 - now the Welsh Government is taking over the process (although it has managed the existing Arriva operation since 2006). What’s more, it is seeking to run a new, not-for-profit model, similar to Transport for London.

Some think it’s good that Wales is assuming control, that it will try to nail down the best possible terms and conditions. Others are less sure. This is a tricky and complex operation, and there are misgivings about the Welsh Government’s ability to rustle up enough good negotiators.

Arriva Trains Wales Policy Director Roger Cobbe is looking on the bright side. He says the Government has assembled people “with expertise of working on DfT franchises” to work alongside its own officials.

Yet some rail experts are sceptical, among them Professor Stuart Cole, emeritus professor of transport at the University of South Wales. He warns that there’s a difference between being a consultant (a hired hand) and a permanent member of staff with a career commitment to improvement.

It’s one of many issues that surfaced following the House of Commons’ Welsh Affairs Committee (WAC) review of the Wales and Borders franchise - its past, present and future. The report is a mix of painful history and optimism, flavoured with the sense of a journey into the unknown.

The process of shifting responsibility for commissioning and operating the franchise, known as a Transfer of Functions order, is still lumbering on. It should be completed by late 2017-early 2018, according to a Welsh Government spokesman, so WAC wants to keep a sharp eye on what’s happening, on which areas are in dispute, and to be told when it’s completed.

One outcome is that Westminster MPs will no longer have any direct scrutiny role of the Welsh rail operation. WAC has suggested establishing a means whereby MPs can write to the Cabinet Secretary on behalf of unhappy constituents who have used Wales and Border trains in England - and expect a meaningful response within 15 working days.

Everyone, everywhere, wants better services. Besides ATW, the country is served by three other operators: Great Western Railway (with services from south Wales to London and the South Coast of England); Virgin Trains (running trains from Holyhead to Birmingham or London); and CrossCountry (operating between Cardiff and the Midlands).

Wales and Borders franchise - and with it the chance to run the South Wales Metro - has attracted four bidders: Abellio Rail Cymru; Arriva Rail Wales; KeolisAmey; and MTR Corporation (Cymru) Ltd. And should all the offers fall below expectation, WAC has a fall-back plan.

“If there’s no confidence in any bidder, we recommend considering a management contract operated by the Welsh Government through Transport for Wales for at least five years,” it says.

Who knows how the bidding will pan out, given that Welsh Government transport minister Ken Skates is intent on running the new franchise like a concession?

“Transport for Wales will only let those contracts that it has to on a commercial basis,” he says. “Where they do, the profits… will be capped, with excess reinvested into the wider transport system, driving down costs for the passenger.”

Wherever possible, other services will be run through a not-for-profit model, Skates adds. Once the franchise is let, he expects Transport for Wales to oversee managing aspects such as marketing and integrated ticketing.

Expect plenty of horse trading over the next year. And how high will the bar be set, in terms of standards? Might some contenders drop out?

That actually happened in 2003. Cole told WAC that the franchise was let “with a low level specification” - no allowance for growth in passenger numbers, and no extra train capacity. “One competitor pulled out because of what it saw as running down the railway in Wales by the SRA,” he said.

Wales has long felt hard done by in terms of spending. In 2003, it was out of luck again because, as Cobbe pointed out to the Commons committee, SRA was “wrestling with… West Coast modernisation and… found itself with the most colossal budget crisis”.

Thus it let a ‘minimally specified franchise’ to preserve continuity of services.  Moreover, Cobbe added, once Arriva got the nod (as cheapest bidder), SRA looked for “anything that could be done to reduce the support cost”. He explained to MPs: “Things were omitted from the franchise, with capacity for growth being the most significant.”

Between them, the Welsh Government and Arriva tried to make the best of a bad job. Skates told WAC that his Government has invested around £30 million annually to cope with increased demand, with ATW pumping in a total of £35m.