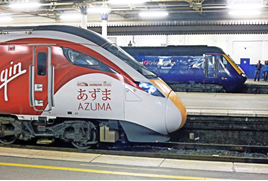 Major new projects will bring new trains in 2017… but in the past year a host of new trains have already been delivered either for testing or into traffic.

Many of these trains are vital to cascade or route upgrade plans, while others represent the first obvious sign of major infrastructure programmes such as Crossrail and Thameslink.

Figures produced in November 2016 by the Rail Delivery Group (RDG) show that orders placed over the past 12 months indicate 5,718 new vehicles by the end of 2020, in deals totalling £11.6 billion.

RDG claims this is the “highest sustained rate for more than 50 years”. Its analysis indicates an increase in the number of carriages in the UK from 12,968 to 14,966 in just three years.

“The trains that Britain’s rail companies are already introducing will represent a step-change in our passengers’ experiences. Each train will be better connected, more comfortable and far more advanced in the technology it uses as part of our plan to build a better railway,” says RDG Chief Executive Paul Plummer.

“People either love or hate the more iconic trains from the 1970s and 1980s. But fare-payers want a travelling environment that meets the demands of the 21st century, and so many of our older trains are being gracefully retired. The new generation of rolling stock that we’re introducing embraces technology to ensure passenger journeys are as reliable as possible and truly connected like never before.”

In December 2016 the rate of train deliveries really accelerated. In the week commencing December 5, the first Crossrail Class 345 Aventra and the first Siemens Class 707 for South West Trains were delivered; the first UK-assembled Intercity Express Programme Class 800/0 was unveiled to the trade press at Newton Aycliffe; and at Temple Mills the second of seven Siemens Velaros ordered by Eurostar in November 2014 was delivered to the UK. Then, on December 11, the first Class 385 built by Hitachi Rail Europe for ScotRail was unveiled at Glasgow Shields Road.

Later in the month, Great Western Railway Class 387/1s and Govia Thameslink Railway Class 700/0s continued to be delivered to their respective bases, and by the end of the year the first dual-mode Class 88 for Direct Rail Services was also due to arrive in the UK, heralding an innovative step-change in freight train haulage. This was delayed and is now due early this year.

The actual trains entering passenger traffic this year has been limited to four fleets. But all are significant, with two representing major infrastructure upgrades.

In February 2016, Govia Thameslink Railway (GTR) started to introduce 27 four-car Class 387/2s (387201-387227) onto its Gatwick Express services. These were built by Bombardier at Derby Litchurch Lane, construction having started in 2015.