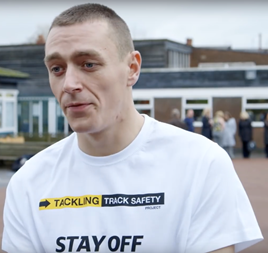 Tom Crosby is having a substantial impact on reducing the level of trespass on the railway having come so close to losing his own life while playing on the tracks near his home on Merseyside when aged 14.

Now a young adult, he still bears the marks of being electrocuted by a live overhead cable when standing on the roof of a stationary train.

The incident hospitalised Crosby for two weeks and required 14 skin grafts to repair the damage caused by the horrific burns he suffered. But he was lucky to survive at all after fortunately grabbing the wire with his right hand, and would have died immediately had he used his left due to the proximity of his heart.

Crosby’s story is made all the more remarkable after his life took a turn for the worse when he then got in the wrong crowd and did not return to school. He became estranged from his family but was prompted to turn his life around following the untimely death of his brother last year.

He got in touch with Network Rail and offered to speak to young people about safety on the railways. Recounting his brush with death in vivid detail, Crosby speaks at four or five events a month and is sent out by NR to talk at local schools in areas where a spike in trespassing is recorded.

“Tom has a lot of charm and there are no questions that he will not answer. Feedback has shown that there is a 94% retention of knowledge among his audience and this amazing young man is a very worthy winner of a Judges Special Award.”