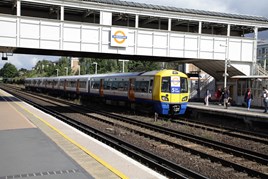 The winner of the prestigious of the National Rail Awards Passenger Operator of the Year is London Overground. This is the first time the company has won the award.

London Overground Rail Operations (LOROL) took over London Overground concession in November 2007 and has set about transforming a railway that was viewed rather dismissively. Underused railways serving rundown stations have been replaced by a busy railway serving refurbished and new facilities across 23 of the capital’s 33 boroughs.

LOROL focussed on customer service, innovation, investing in staff and building relationships with its local communities. It worked consistently with Network Rail and Transport for London to improve and expand a crowded railway.

Now, LOROL is one of the best performing railways, with a daily punctuality figure of around 97% and continually rising passenger satisfaction which is now at 88%, LOROL reports it has the lowest rate of customer complaints of any Train Operating Company (TOC), receiving 2.8 complaints per 100,000 journeys.

It has recently completed a project to increase all its 57 electric multiple units operating on the East London, North London, South London and West London Lines to five-car formations, as well as those on the DC Lines to Watford. This project, the London Overground Capacity Improvement Programme (LOCIP) increased capacity by 25%, with an extra 170 passengers per train. This is needed to deal with the predicted rise in London residents by 810,000 by 2021. This also involved a new stabling facility at Wembley and infrastructure improvements at Willesden and New Cross Gate to create additional capacity needed to maintain the longer trains. LOCIP presented a significant problem in that two trains at a time were out of traffic, constraining availability. However, planning meant that there was no impact on services.

Another key part of LOCIP is that the Selective Door Operation (SDO) and Correct Side Door Enable (CSDE) software fitted enables the train management system (TMS) to carry the LO network geography, meaning that the train knows where it is and can employ the CSDE, for example, and can prevent the driver from releasing doors when they shouldn’t be. This is a first for the UK.

And on May 31 2015 it also added the West Anglia inner suburban routes to its portfolio, thereby increasing the network by a third.

Today LOROL operates 7.4% of all UK rail services, yet only covers 0.5% of the country’s track mileage. It carries 585,000 passengers on a typical weekday, which equates to a five-fold increase since taking over almost nine years ago.

On May 31 2015, LOROL added the West Anglia inner routes to its network. This required a long and complicated process to be completed but this was completed with significant planning, management and preparation. Performance of the fleet, which dates from the early-1980s, has steadily improved by increasing the dedicated traincare provision by 200% and refurbishing the 30 trains it inherited. It recruited 16 drivers and created more than 80 new roles. LOROL took over 24 stations, 25 mess rooms and a depot. Now all stations are staffed from the the first train to the last, the 24 stations while 11 new gate lines and 59 new ticket machines are being installed, as are 74 passenger help points. LOROL says this investment will result in a 25% rise in passenger numbers. In the first year, punctuality has risen to 95% on the West Anglia’s, and in the latest Ticketless Travel Survey LOROL achieved a 3.41% reduction from 12.3% for the inners compared to the previous survey. Overall, LOROL’s pledge to keep ticketless travel below the 5% default score is on track, reducing from 13% in 2007 to 0.64% in the December 2015 Ticketless Travel Survey. The operator accepts Oyster at all stations and has introduced Apple Pay and Contactless Card payment too. More than half its journeys are now ‘pay as you go’ it says.

To ensure that the service keeps improving, LOROL has carried out 29 fleet improvement modifications. One example is on the diesel trains used on the Gospel Oak-Barking line where additional handrails were added, enabling a further 50 standing passengers to be able travel on the trains.

LOROL has equipped staff with apps, new web apps and forms that are available for the iPhones and iPads they carry. These are used for customer information. Some of these include Orinoco, which is a real-time app designed by LOROL staff that integrates Control data with that from TfL, National Rail and other real-time data into one accessible location. It also accesses London Bus, LOROL, Docklands Light Rail, River Boats and National Rail services on one map. The operator believes it could be the first in the world to introduce smartwatches for staff.

When LOROL took over in 2007, some of its routes were not viewed as the safest for passengers, but that perception has changed.

Now, every station, other than those on the West Anglia inners, has achieved secure station accreditation. The WA stations will have done this by November. In the past year, crime on LO has dropped 8.3%.

There have also been a number of projects to improve passenger safety including the deep cleaning of stations to help reduce slips, trips and falls, the introduction of CCTV in high risk accident areas at key stations and a trial project regarding introducing defibrillators at six stations, with one already saving a life.

When it comes to sustainability, LOROL is leading the way. Steps to improve its footprint include the provision of rainwater harvesting at Willesden depot, improved arrangements for dealing with waste from station and trains with nearly 70% of waste recycled, improved recycling facilities at its head office and removal of individual waste bins and more efficient and effective lighting installed at Willesden.

Overall, LOROL employs more than 1,400 staff and in its latest annual employee engagement survey, View Point, 97% of employees agree they support LOROL’s vision statement, 87% believe strongly in the goals and objectives of the company and 87% would recommend LOROL as a good place to work.

“ Mammoth growth by transforming its complex network.  585,000 people are carried on a typical weekday, which is a five-fold increase from November 22007. The last 12 months have seen a 14% increase in passengers and it has recorded excellent public performance measurement (PPM) and National Rail Passenger Survey (NRPS) scores.

The five- car Train Project was completed successfully in December 2015, increasing capacity by 25%, with minimal impact on passengers.

L LOROL also took over West Anglia services and improved them significantly. The company has continued to improve despite the end of the concession in November, with continuous passion & commitment.