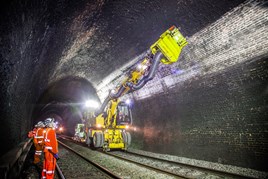 The traditional approach to removing the decades of soot involves the use of water or compressed air coupled with manual scraping, which is ineffective, inefficient and not environmentally friendly. Network Rail East Midlands Infrastructure Projects had a particular problem with soot accumulations in four tunnels and approached AMCO Rail to develop a new solution, which had to be ready in just five months.

The scabbling head AMCO designed can be mounted onto an adapted Road Rail Vehicle and uses 15 wire brushes arranged to prevent damage to the brickwork. On its first trial at Meir, Milford, Clay Cross and Bradway tunnels, 10,350m2 of soot has been removed to date in 28 possessions. Using conventional methods, this would have required in the region of 86 possessions and consumed 7,740,000 litres of water.

If that achievement wasn’t staggering enough, there is the potential for this system to be used for other applications such as the removal of spalling brickwork, calcite lining and poor quality concrete applications.

“We were seriously impressed with this invention. It was the most innovative entry this year, with significant benefits already achieved and more to come in the future.”