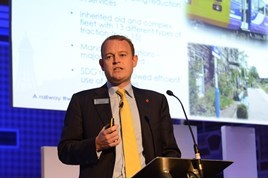 Alex Hynes is to replace Phil Verster as the ScotRail Alliance Managing Director.

Currently MD of Northern, Hynes will move north of the border later this year. Verster is leaving his current post to take over leading the construction of the East West Rail project.

Hynes has been in his current role for three and a half years, covering two franchises (the current Arriva-owned Northern franchise began on April 1 2016, replacing the Abellio/Serco-owned franchise).

He called the Alliance a ‘cutting-edge arrangement’, adding that it was “delivering one of the largest programmes of investment, change and modernisation since the railway was built. To be part of that, and the plans to vastly improve services and capacity for customers, is hugely exciting for me.”

Network Rail Chief Executive Mark Carne said: “This is one of the most pressurised, high-profile roles in the whole railway industry and we look forward to helping him succeed.”