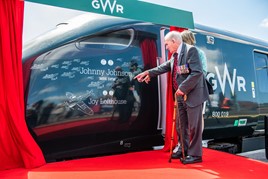 The 100th anniversary of the RAF and 75 years since the Dambusters raid was marked in a double naming ceremony at Bristol Temple Meads on June 22.

Great Western Railway 800019 carries the names of the late Joy Lofthouse, who flew for the Air Transport Auxiliary (ATA), and Johnny Johnson MBE, the last British survivor of the Dambusters raid.

Lofthouse was one of 168 female members of the ATA who delivered hundreds of planes to airfields across the country during the Second World War. They were known as the ‘Spitfire Girls’.

Westbury-on-Trym resident Johnson was the bomb aimer in the second wave of Lancasters that attacked the Sorpe Dam in Germany.

The ‘800’ also carries the shape of the Spitfire plane next to Lofthouse’s name, while next to Johnson’s name is a formation of 19 Lancaster bombers, separated into three groups representing the three waves that carried out the raid. Eight of the planes have been shaded in tribute to the planes that were lost, along with the 53 members of 617 squadron who did not return.

Johnson said: “To know what we did all those years ago is still recognised in this way is a great tribute to my comrades. We were a group of young men with a difficult job to do.”