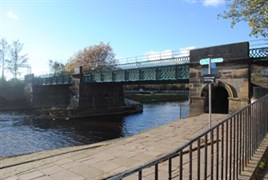 Network Rail is inviting residents, business and passengers to find out more about the Scarborough rail bridge in York as the works team holds an open day.

Between 1000 and 1900 on December 4, the site offices in Marygate car park, Frederic Street will be open.

The £6m investment is the most significant since the bridge was built in 1875 and, once complete, will mean it is fit for another 120 years service. Work involves replacing bridge decks, track and installing a new walkway for railway workers. The project is due to complete in April 2015.
Network Rail and City of York Council are also exploring potentially redesigning the public footbridge – which is next to Scarborough Bridge - and are working to make sure the newly-refurbished rail bridge takes account of these possible redesigns.
However, any work to the footbridge will not take place at the same time of the rail bridge refurbishment. This is because they are independent structures, and the work programme for the rail bridge is complex and already underway.
When the bridge’s decks are replaced in February 2015, trains will not be able to run over the bridge. The new decks will be installed from Marygate car park using a large crawler crane.