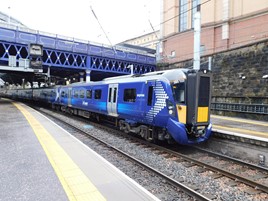 Platforms 2-5 are being extended to enable eight-car electric multiple units to serve the station, as well as five-coach Inter7City High Speed Trains.

The existing hoardings are being moved a further five metres into the station, as part of the £120 million project to redevelop Queen Street. Initially, work behind the hoardings involves the construction of buffer stops for the extended platforms.

During the second half of June, engineers will work in front of Platforms 2 and 3 to uncover a space beneath the concourse that was originally excavated in 2016, when the station was closed. This was recovered with a temporary concourse while other parts of the station were redeveloped.