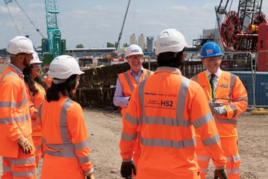 Work to install the first permanent structure on what is claimed to be the biggest station ever built in a single-stage build in the UK was formally launched on June 23.

Secretary of State for Transport Grant Shapps visited Old Oak Common in advance of construction of an underground diaphragm wall more than a mile in length, around what will become the station’s ‘box’ containing six platforms for HS2.

Shapps said that the “start of permanent works” at the West London interchange “marks yet more progress in delivering HS2, the high-speed, high-capacity and low-carbon railway that will form the backbone of our national transport network”.

Construction of the £1.67 billion station is forecast to take around seven years, with the London-West Midlands section of HS2 expected to open in 2029-33.

Following the first phase, to create the 750,000m3 box, work on the station’s eight overground platforms will begin. Of these, four will serve Elizabeth Line (Crossrail) trains, with the remainder for long-distance trains on the Great Western Main Line.

With a roof covering the area of over three football pitches, and built on a 25-acre (ten-hectare) site, Old Oak Common is expected to absorb 73,000 tonnes of steel, 13,000m2 of glass and 2,720m2 of solar panels. The complex will incorporate 53 lifts and 44 escalators and is expected to be used by more than 250,000 passengers each day.

Design of the ‘superhub’ has been led by WSP with support from WilkinsonEyre, while HS2’s construction partner is the Balfour Beatty VINCI/SYSTRA joint venture.

As well as its direct role as a transport hub, Old Oak Common is expected to be a catalyst for regeneration, with plans to transform the area around the station being led by the Old Oak and Park Royal Development Corporation.