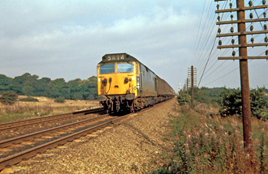 January 1967 was also when the CM&EE confirmed to the Board’s Chief Officer New Works that the new locomotives would be allocated to the LMR and that the latter should assign a Regional authorisation number. Timings for Class 50 on the East Coast route were produced at one stage and showed an advantage over Class 47 by virtue of the former’s 100mph maximum speed. For whatever reason, however, the type was never used in regular service on that route.

Meanwhile, EE was progressing with the design of the technical parts. Its prototype locomotive, DP2, was used as a test bed for the control system destined for Class 50, the TOPS designation, and it went to Vulcan Foundry in January 1966 for changes to be made and a routine examination.

In November further modifications were made at Finsbury Park when slow speed control was added. The system was tested in the Doncaster area in January 1967 with a train weighing 1,650 tons. On wet rails, DP2 struggled to restart on a 1 in 200 gradient but the use of the newly-fitted tractive effort control and the automatic low-speed electronic wheelslip protection were judged to be beneficial.

Within EE, generator production was switched to Bradford but deliveries commenced much later than planned. This then held up testing the engines that were to be fitted into individual locomotives. Instead of engine and generator sets being shipped to Vulcan from autumn 1966, in the event none were ready until March 1967.

Vulcan was now able to run up a complete locomotive and testing revealed that the engine was running hot due to inadequate internal ventilation. Whereas DP2 had opening bodyside windows and large oil filter grilles, the Design Panel had insisted on none of these and also wanted a sealed roof. Vulcan’s solution was to use the normal reserve margin within its calculations, rather than derate the engine by 1%.

Body styling also forced the inertial filter vents to be at cantrail height. Dependant on the direction of travel, the air drawn in would include engine exhaust, which was greasy and hot. Over time, these gases coated the filters with an oily residue that was almost impossible to remove. The locomotive interiors became so filthy that staff at Bristol Bath Road depot received a premium for working on the class.

Following testing within Vulcan during August, class doyen D400 ran trials on BR during September and was accepted by BR for traffic on October 3. It was, however, to take two months before D401 was commissioned and by the end of 1967 only four were in service.

The main problem centred on the electronic control system. EE had limited experience of systems on electric locomotives and multiple units but Class 50 was the first full-scale use of such a control system on a diesel design.

Two memos within BR referred to EEs inability to deliver equipment to the agreed programme. One from the LMR to the Board in 1966 bemoaned late delivery of Class 86, while the following year the Bournemouth electrification scheme was the issue. These proved prophetic as regards the ‘50s’.

The revised delivery schedule provided for commencement in July 1967 and completion in June 1968. Although the first of the class was not ready by July, EE claimed there was no delay and remained committed to having 17 examples with BR by the end of the year rather than the promised 21, a target it missed by a mile. BR’s CM&EE observed that labour disputes relating mainly to poor prospects for future orders at Vulcan were virtually holding EE to ransom.

By March 1968, EE gave November 9 as when the order would be completed but this was three weeks adrift. Towards the latter part of 1968, Vulcan personnel could see that there was little prospect of continuing employment and construction slowed. Previously five units per month were being outshopped but it took two months for the last five to be delivered. EE paid £213,142 in liquidated damages for the delivery delays, roughly equal to the cost of two locomotives.

After D400’s release to traffic, the September 1967 issue of Modern Railways carried an editorial ‘Type 4 With Trimmings’ reputedly inspired by a disaffected EE employee bemoaning all the gadgetry that had been added to DP2’s design.

In February that year, the LMR’s General Manager had written to the Board Member for Operations to express concern about the changes that the CM&EE had made to DP2’s design. The appearance of the September editorial and severe delay in deliveries prompted his successor to voice the same concerns to the BR Chairman who was, coincidentally, his predecessor. The memo continued by saying the late delivery of ‘D400s’ had completely upset the plans for the elimination of steam and who had taken it upon themselves to make so many changes to a simple and proven design.

A top-level exchange of memos ensued that became acrimonious as the BR CM&EE sought to justify matters. The latter argued that the problems plaguing locomotive commissioning at the time involved equipment which had worked satisfactorily on DP2. In truth, some of his arguments bent the facts to suit his position.

Sadly, history records that, once the commissioning issues were resolved, the engines began to give trouble due to changes made by EE during manufacture. Once these had been rectified, the electrical machines, in particular the main generator, proved unreliable. While the same design of component had been trouble-free in DP2, it was alleged that EE substituted lower-grade insulation for the production series.

BR had requested an alternator in place of a highly-stressed main generator. Unfortunately, EE had no design available and traditional DC machines were used, which was to cost BR, and the preservation movement, dear in the ensuing 50 years.

This feature can be read in RAIL 836