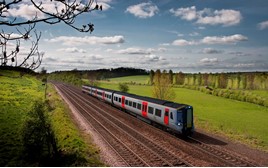 A test track for the rail industry is being planned for Wales.

Transport Secretary Ken Skates revealed the plans on June 25, as part of the Welsh Government’s plans for an integrated ‘Global Centre of Rail Excellence’.

The centre would cost around £100 million. Private sector investment is required, along with the commitment of manufacturers, rolling stock companies, network operators and stakeholders said Skates.

The plan would be for two fully-electrified test ovals. The larger would be a 4.5-mile oval and a smaller 1.9-mile oval (capable of 100mph running).

The aim is for it to rival Siemens’ Wildenrath facility in Germany, and the Velim site in the Czech Republic. Each of these has waiting lists for up to a year he said.

Under the plans, the Welsh Government aims for the site “to play a key role in the development of next generation hydrogen and battery powered trains as the rail industry, like the car industry, moves to decarbonise.”