‘We will build trains in UK,’ says Talgo 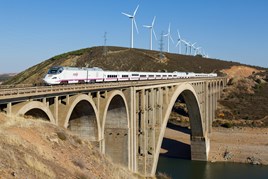 Spanish train manufacturer Talgo plans to build a factory in the UK, and recruit locally should it win train orders for this country.

Speaking exclusively to RAIL in London on September 13, Talgo’s President Carlos Palacio Oriol said the company was looking to use its expertise to bid for a number of tenders in the country.

“If we win a deal, we will start work on a factory the next day. We need a big order, otherwise it makes no sense, but we are fully committed to the UK ,” he said.

“We mainly specialise in high speed and very high-speed trains, but are interested in and have developed products for other markets too.

Oriol explained that by “big order”, he meant even half of some of the deals that had been signed already by other manufacturers.

Oriol believes that trains for HS2 must be built in the UK, and that Talgo would manufacture in this country rather than assemble.

He added that the UK supply chain must be involved as much as possible: “It is very important that we include the UK in an order. Any industrial investment would create jobs, thousands of jobs.”