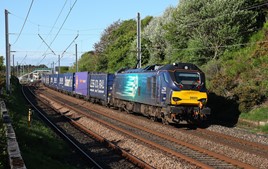 Direct Rail Services Commercial Director Chris Connelly has told RAIL that the operator is developing a 20-year strategy based around other sectors – such as charter work and lending locomotives to passenger operators – to support the nuclear work. “That allows us to be quite aggressive in those complimentary sectors and that’s what we intend to do, and we intend to be one of the leading rail freight operators in the UK.”

He was discussing improvements for the Cumbrian Coast Line, and the various options. Connelly hinted that DRS would be willing to invest in improvements to the line, but only as part as a consortium: “I think it’s one of those things where different people need to come to the party. There’s a lot of growth in the Cumbrian Coast line, with the energy sector and absolutely DRS is willing to play its part in that, but I think it is part of an overall part of investment and upgrade,” he said.

He said as well as upgrading the infrastructure, the line could benefit from longer opening hours, pointing out that at present it is shut to traffic overnight, thanks to the line being controlled from a number of signal boxes up and down the coast.

However, Connelly rebuffed a suggestion that DRS’ freight trains should be given priority over Northern’s passenger services – for which DRS currently supplies a number of Class 37/4 and Class 68 locomotives and Mk2 coaches that operate a limited number of passenger services up and down the line owing to late cascades of DMUs from other parts of the country – in exchange for providing investment: “It’s about looking at freight in partnership with passenger operations,” he explained. “The passenger requirements for the line are clear because the roads around the Cumbrian area will not support the number of people that need to get to work. It’s not freight over passenger, its freight working with passengers.”